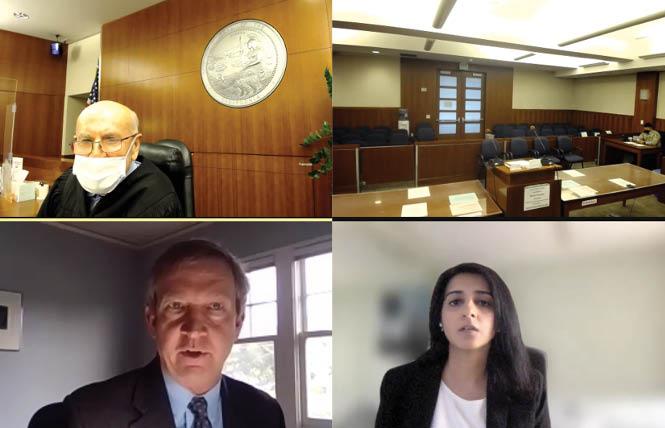 A court hearing in a lawsuit alleging that the San Francisco Police Department illegally spied on protesters in Union Square comes as Mayor London Breed and a number of city supervisors spar on whether to expand the use of surveillance technology.

The plaintiffs in the suit were protesting the murder of George Floyd by a Minneapolis police officer. They are lead plaintiff Hope Williams, a member of the Harvey Milk LGBTQ Democratic Club, and Nathan Sheard and Nestor Reyes.

"Our lawsuit defends our right to organize protests against police violence without fear of illegal police surveillance," the trio wrote in a recent post on the website of the Electronic Frontier Foundation, which is also representing the plaintiffs.

Their attorneys are arguing that the use of the security cameras was illegal under a city ordinance passed by the Board of Supervisors in 2019 that requires any city department obtain board approval prior to acquiring, using, or borrowing any surveillance technologies, except in "exigent circumstances."

The ordinance states that in such circumstances a city agency must "cease using the surveillance technology within seven days, or when the exigent circumstances end, whichever is sooner."

The Union Square Business Improvement District operates a surveillance camera network that was monitored by police May 31-June 7, 2020.

Electronic Frontier Foundation attorney Saira Hussain and Deputy City Attorney Wayne Snodgrass both filed motions for summary judgment with Ulmer, who decided that because "the key facts are undisputed," both sides should debate finer points of law.

One issue was whether the seven days has to be continuous.

"You said the technology had to be in use continuously and it had to be incorporated into department operations," Ulmer said to Hussain. "I'm just wondering where you got that."

Hussain: "We use the term continuous, and that we draw from two separate cases."

Snodgrass argued that case law beyond San Francisco's ordinance isn't indicative of how this particular ordinance should be interpreted.

"This is a big country with a lot of states and jurisdictions and if you cull through all the decisions of state and federal courts, you'll find some supporting plaintiffs' argument," Snodgrass said. "I think both sides can find semi-random cases from here or there that will lend support to this proposition. ... there is no requirement of ongoing, continuous, or incorporated into departmental operations in this ordinance or its history."

Ulmer asked Hussain why the word continuous isn't in the ordinance if, as plaintiffs allege, it's required.

"The Board of Supervisors could have, but I don't believe they needed to, add that language," Hussain argued.

Snodgrass said that it should be assumed that continuous use is not required by the ordinance.

"When you're talking about an event that arises only sporadically, of course the use is not going to be continuous. It depends on how long the circumstance necessitating the use of the technology is prevailing," Snodgrass said. "SFPD had to get the permission of the Union Square Business Improvement District to get access, but that fits squarely within the language. ... this phrase possessing or using is significant to the legislative intent in a number of ways."

Hussain argued that the discovery of unapproved government surveillance has a deterrent effect on citizens' expressing their constitutional rights to freedom of speech and expression.

"When people are participating in a mass protest and they discover the city has a surveillance program not approved by the Board of Supervisors that creates a chilling effect," Hussain argued.

Snodgrass said "that goes back to standing, and the city is not contesting plaintiffs' standing to bring this action."

Ulmer decided to postpone the rest of the arguments till the morning of February 1.

"Very interesting case," Ulmer remarked. "This is what we think about when we go to law school."

The issue has been brought back to the spotlight by public concern about crime in San Francisco and Breed's pledge to crack down on it. The mayor made national headlines late last year for saying she's sick of "all the bullshit that has destroyed our city," and subsequently declaring a state of emergency in the Tenderloin neighborhood.

Breed announced her intention to introduce legislation to the Board of Supervisors January 25 to allow more police use of video surveillance technology — and to go to the voters if the supervisors cannot come to an agreement.

"Under current law, access and use of real-time video footage by the police department faces significant challenge except in exigent circumstances, which are narrowly defined as emergencies involving imminent danger of death or serious physical injury to any person," Breed's office stated in a news release. "For example, during the recent organized retail theft event in Union Square, police commanders were forced to instruct officers not to monitor live camera feeds while the crimes were underway. Police face similar obstacles in using technology to disrupt organized open-air drug markets that operate daily in the Tenderloin.

"The mayor's proposed legislation will clarify and explicitly authorize law enforcement to temporarily use cameras to respond to and monitor criminal activity that takes place during critical events or in public safety crisis areas," the release continued. "The ordinance clarifies and provides law enforcement the tools to ensure that San Francisco is able to respond to the challenges presented by organized criminal activity, while still maintaining critical safeguards and oversight."

The release defines a "critical event" as "an incident, occurrence, or event of a criminal nature involving serious property damage or serious physical injury to any person or an imminent threat of such an incident, occurrence based on credible information." A "public safety crisis area" is "a geographic area in the City and County of San Francisco where repeated or sustained high levels of criminal activity are directly impacting or jeopardizing public health or safety."

Police Chief William Scott expressed his support for the changes Breed is proposing.

"At a time when criminal enterprises are using increasingly sophisticated technologies to victimize Bay Area residents, businesses and visitors, San Francisco police are hamstrung in our ability to nimbly and effectively use many of these same tools to keep our city safe," Scott stated. "Without the commonsense amendments Mayor Breed is proposing, San Francisco will become an increasingly easy target for organized criminal activities."

"The Safe Communities and Government Transparency Act reinforces existing law, which bans the use of facial recognition technology and currently requires all city departments who use surveillance technology to publicly submit use policies governing the collection, use, retention, and sharing of sensitive personal information," a news release from the supervisors stated.

Two LGBTQ activists were quoted in the supervisors' release.

Stephen Torres, a Castro LGBTQ Cultural District advisory board member, helped lead the charge last year against a private surveillance camera system in the Castro similar to the one in Union Square. The defeated system proposed by the Castro/Upper Market Community Benefit District would have been funded by Chris Larsen — who provided the funding for the Union Square installations.

Juanita MORE!, a longtime activist and drag queen who helped to create the People's March for Pride 2020 and 2021, stated that "what the mayor is proposing is not what we've been asking for and skirts responsibility for the real work of addressing public safety and public health.

"The residents of the Greater Tenderloin want solutions, not a surveillance state," MORE! added. "Giving SFPD top brass a literal blank check only builds on a history of abuse of power — as opposed to building public trust. Our crisis can't be exploited to harm us."