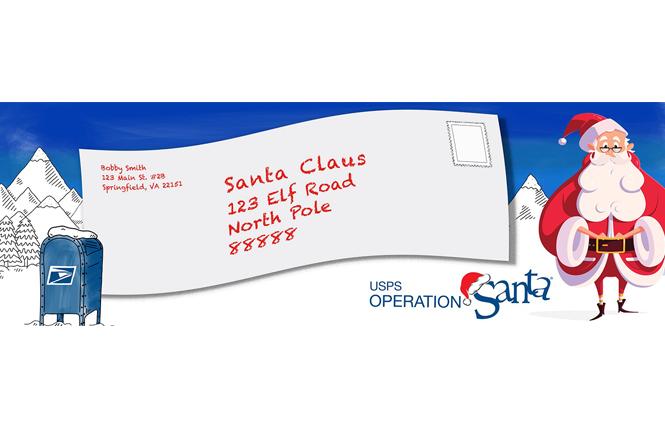 The U.S. Postal Service is accepting registered adopters to help fulfill requests from letters to Santa it has received. Photo: Courtesy USPS

The U.S. Postal Service's Operation Santa program is live and people can sign up to be a registered adopter to help make the holiday season special for kids and their families.
According to a news release, over the past three weeks, the postal service has been delivering letters from across the country to Santa's workshop.

Interested registered adopters should visit the website, read through the letters, and pick one or more wishes they'd like to make come true, the release stated. Once the letters are chosen, adopters must follow the directions they received in their welcome email in order to make sure gifts arrive on time. Letters can be adopted through December 22 and packages can be shipped through January 14, the release stated. Letter adopters are responsible for all costs to ship the gift packages, including appropriate postage.

Operation Santa was established by the postal service 109 years ago to help those in need experience a happy holiday season, the release stated. People do not have to be religious or even believe in Santa to participate.

People can still submit letters to Santa through December 10. View the aforementioned website for details.

Scholarships available for AIDS 2022
The International AIDS Society, which puts on the biennial global AIDS conferences, has announced that the scholarship program for AIDS 2022 is now open. The conference will take place in-person in Montreal, Canada, and virtually July 29-August 2. A pre-conference takes place July 27-28.

A news release stated that the scholarship program is open to anyone working or volunteering in the field of HIV and who will be at least 16 years old by July 27. Priority will be given to abstract presenters, workshop facilitators, and organizers of the Global Village and youth program activities whose submissions have been selected for the conference.

Priority will also be given to applicants from lower-income countries; applicants who belong to key populations and people living with HIV; young people and junior investigators under 35; and applicants who did not previously receive a scholarship for an IAS conference, an email stated.

Applicants can choose whether to attend the conference in-person or virtually. Financial support covers registration, travel, accommodations, daily living allowance, and/or virtual accessibility (SIM card, data package, or device), the email stated. Successful applicants will have access to the conference and pre-conference.

Scholarship applications will be accepted until January 31. IAS members can apply through February 7. For the application, click here.

Castro patrol anniversary party
Castro Community on Patrol, a volunteer organization that provides safety patrols in the LGBTQ neighborhood and offers general safety information, will celebrate its 15th anniversary Monday, December 13, from 7 to 9 p.m. at the Academy, 2166 Market Street.

Greg Carey, chief of patrol for CCOP, stated in an email that the event would recognize current and former volunteers.

"But most of the evening will be a chance to have conversations about the past and plans for the future," Carey stated.

There is no cost to attend. There will be a cash bar if attendees want to enjoy a beverage.

CCOP is a program of SF-SAFE. Volunteers do not physically break up fights or make arrests, but it has had a positive impact on the neighborhood, according to its website. Those interested in learning more can click here. CCOP is a different organization than the San Francisco Patrol Special Police, which will end its services in the Castro December 31, as the Bay Area Reporter previously reported.

Take the 2022 Dignity Fund survey
The San Francisco Department of Disability and Aging Services is seeking the community's input. As part of the agency's 2022 Dignity Fund Community Needs Assessment, it is gathering feedback through an online survey on the needs of older adults and people with disabilities so it can continue to improve how it serves city residents, according to a news release.

In November 2016, San Francisco voters passed Proposition I to establish the Dignity Fund. Prop I called for funding of approximately $38 million a year, with scheduled increases until 2037. The fund supports the health and well-being of older adults and adults with disabilities, a news release stated.

To take the survey, click here. The deadline is Friday, December 17. The survey is available in 10 different languages.