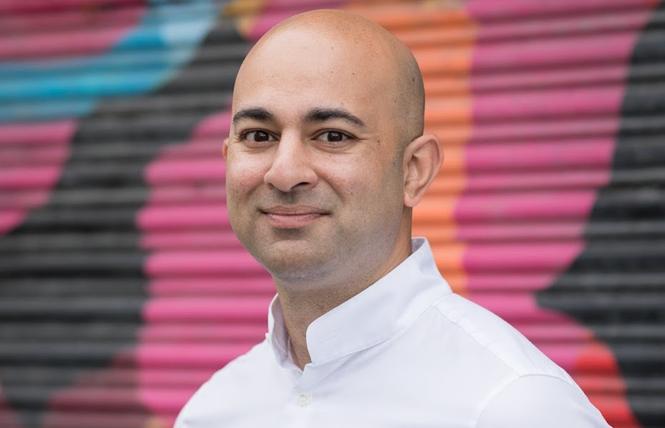 When I came out to my loved ones, they were worried I would get AIDS. When I came out to my best friend, she told me she knew a camp that could fix me. I left my hometown six months after coming out and landed in San Francisco, ready to attend San Francisco State University. At first, it was glorious. San Francisco welcomed me with open arms. But over the years, I have watched our city change for the worse, almost becoming an exclusive club. I started to lose faith until I got coffee with someone I now consider a friend — Bilal Mahmood, who is now running to represent San Francisco in the California Assembly.

Mahmood's story is like many immigrant stories in the Bay Area: His parents came to the Bay Area from Pakistan in the 1980s; three generations of his family stayed in a single bedroom apartment upon first moving here. His mom rode the bus with Mahmood to drop him off at the local public school, and later worked as a librarian. His dad went to college, which was the key to the middle class, and by extension, to make a better life for his family.

Mahmood's story is emblematic of the San Francisco I remember, where anyone — from Pakistani immigrants to a queer kid from a conservative town — could start over and build a new life. In recent years, San Francisco's problems seemed intractable and unsolvable by our current politicians, no matter how much money we threw at them. We are grappling with an ever-widening gulf between the super rich and the impoverished, where our civil rights are up for debate, housing is scarce, and our climate is in crisis.

Then, I met Mahmood as he geared up to run for public office, and I am feeling hopeful again. Now is the time for a change because our city is not changing for the better. If you think San Francisco is on the right path, Mahmood is not your candidate. If you think we need fresh, bold ideas to change our current course, then Mahmood is for you. We need ideas that push us further, forcing us to think outside the box. As of writing this, Mahmood is the only candidate in the race to have an actual policy platform section on his website. He has a plan for us, our community, and the city.

First, our fundamental rights are not a passing thought; LGBTQ+ rights are explicit at the top of his agenda. The bare minimum of saying you support the LGBTQ+ community is not enough. Mahmood, a straight ally, plans to push for increasing access to gender-affirming services, protecting intersex rights through prohibiting unnecessary surgeries, and enabling LGBTQ+ workers to use existing care and sick leave for our families — to start. Our community is still facing an uphill battle regarding fundamental rights. In the coming years, we need someone who will ensure our voice is front and center. I expect this from Mahmood because he has already committed to introducing legislation similar to Senate Bill 225, a ban on gender assignment surgeries on children who cannot consent, by gay state Senator Scott Wiener (D-San Francisco) when he goes to the Assembly. He is willing to give concrete promises to be held accountable.

Second, he realizes housing and compassion are what San Francisco needs. From 2017 to 2019, our city saw a 19% increase in queer homelessness. As cost-of-living skyrockets and displaced individuals seek shelter within our city, we need action. "Built for Zero" is the methodology Mahmood is proposing, proved across 17 cities. The program creates tailored solutions for individuals across a continuum of care, so the entire community can reduce homelessness. Instead of one-off pet projects, it is a systematic analysis of the problem we face with a solution for our community. These are the bold ideas we need.

Finally, Mahmood sees climate justice as one of the leading issues our state has to tackle. Underserved communities will carry the weight of climate change on their soldiers. The LGBTQ+ community is one of many of these communities. As migration increases due to the catastrophe our planet faces, we know we have to act. Our community will be on the front lines of the fight for climate change, and we have to have someone in Sacramento who is taking this issue on. Mahmood wants to push Sacramento to provide new funding mechanisms that get us to be carbon-neutral and reform our flawed cap and trade system. Ideas that push the envelope are what we need to move forward.

As I speak with my friends about this campaign, I hear hope again. We wanted to support a pro-housing candidate who would be bold in their ideas because we knew we could not continue to elect politicians who have failed to deliver on their promises. We need change now, and I know that Mahmood is just what we need.