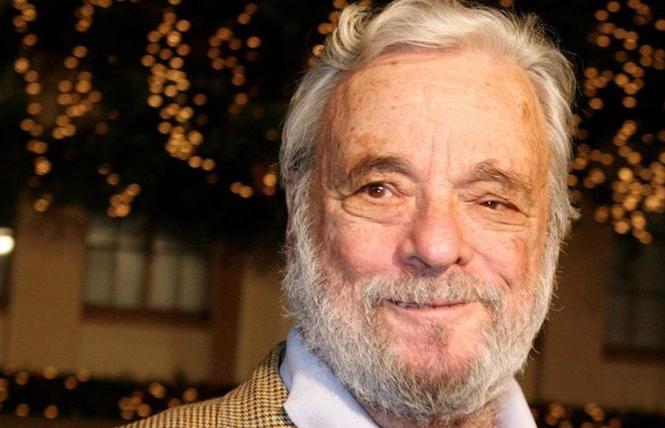 In 1971, at the age of 17, I ventured (by myself) from my Long Island home to New York City to see my first live musical: Stephen Sondheim's "Company." In an instant I was hooked. When Elaine Stritch belted and brayed "Ladies Who Lunch" I knew I wanted to grow up to be her. It was a revelation, and changed my life.

After that, I became a Broadway baby, largely because of Sondheim. I saw the Hal Prince production of "Follies" at least 10 times. I became a "Follies" groupie, and a teenage stage-door Johnny. After the show, I waited for the stars so many times that both Alexis Smith and Dottie Collins took a shine to me, telling me that I was just the most adorable thing they had ever laid eyes on.

Through the years, even after moving to San Francisco, I made the pilgrimage to New York to see the original Broadway casts of "A Little Night Music," "Into the Woods," "Sweeney Todd," "Pacific Overtures," "Passion," and my absolute favorite, "Sunday in the Park With George." After that show's song "Move On" I was shaken to the very core, and one of the show's lyrics taught me the profound life lesson that the two things you leave behind are children and art.

That wisdom has stayed with me almost 30 years after the original opening. I come from a generation where gay people having children was more of a rarity and, to be quite honest, I never for a moment wanted one. In my dark days, as a partnerless and childless queer, I questioned my purpose in life. Thus, I felt great affinity for Sondheim's lyric. In writing this song I think he was acknowledging that those of us, like he and me, who are childless can at least leave behind our art.

Moments like this exist everywhere in his work and get to the crux of why Sondheim was so important to many gay men. Though he never (to my knowledge) actually had any openly gay characters, and was quiet as an openly gay man himself, his work brims with a gay sensibility and subtext. And in a world where the obvious has to be stated, and identity is worn like a badge, his characters are alive with a common humanity. He champions the lonely, the outsider, the unmarried, the queer, the ugly, the sensitive, the artist, the angry. And everyone who sees a Sondheim show, from whatever background they come from, can take away deep empathy and an enriched understanding of themselves and the world around them.

This is why his death November 26 at age 91 has had such a profound effect on so many of us, who flooded social media with deeply heartfelt tributes not only praising his work, but honoring him as a human being. To paraphrase again the song "Children and Art" — isn't he beautiful, there he is, there he is, Sondheim was everywhere.

The night of his death I watched "Sunday In The Park" in tribute. As the song "Move On" played, I again broke down in tears and remembered that kid who went to see "Company," his first Broadway show, who was wide-eyed, open to life's possibilities, and in love with life and art. Though that person is now world weary, sadder, and wiser, and scared and unsure of where he will go as an artist, Sondheim's profound lyric serves as a guiding star:

Stephen Sondheim has now moved on. He was a genius, an important part of so many lives. His passing is an incredible loss. But his work will live on in theaters, cinemas, and opera houses for centuries. He left behind no children but great art. God bless Stephen Sondheim.

This piece was expanded from a Facebook post Marc Huestis wrote. Huestis, a gay man, is an award-winning filmmaker and stage producer. A documentary on his life, "Impresario," will premier in 2022.