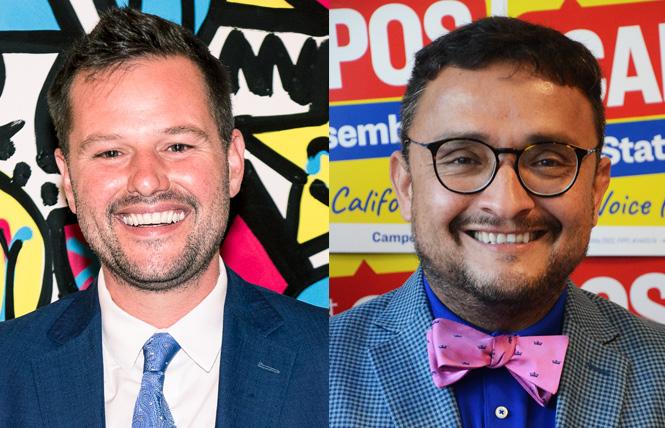 Neither Matt Haney, left, nor David Campos were able to clear the 60% threshold of the vote to secure an endorsement from the Alice B. Toklas LGBTQ Democratic Club. Photos: Haney, Chris Robledo; Campos, Rick Gerharter

With its members' loyalties divided in the special election for San Francisco's vacant 17th District Assembly seat, the Alice B. Toklas LGBTQ Democratic Club was unable to rally around one candidate in the contest. Thus, its official position on the race is no recommendation.

The club has endorsed Assessor Recorder Joaquin Torres' bid to serve out the remainder of former assessor-recorder Carmen Chu's term through early January 2023. After Mayor London Breed named Chu as the new city administrator, she appointed Torres as her successor. He is expected to retain the position next year and will need to run for a full four-year term next November.

As for the recall against three San Francisco school board members, Alice is backing the removal of board President Gabriela López and Commissioner Alison Collins, who was ousted as vice president earlier this year by her board colleagues. But the club is taking no position on the recall of Faauuga Moliga, the school board's new vice president.

All three of the special elections have been combined on one ballot, with the election set for Tuesday, February 15. If no Assembly candidate receives more than 50% of the vote that day then the top two vote-getters will advance to a runoff election April 19.

The jockeying for support in the Assembly race from Alice, historically the more moderate of the city's two LGBTQ Democratic clubs, centered on District 6 Supervisor Matt Haney, a straight ally, and gay former District 9 supervisor David Campos. Both contenders are part of the city's more progressive wing of the local Democratic Party.

Campos in October was able to secure the endorsement of the more progressive Harvey Milk LGBTQ Democratic Club. But with Haney's top legislative aide, Honey Mahogany, co-chair of Alice's political action committee, it had been considered unlikely that Campos could also receive Alice's endorsement.

Those doubts were borne out Friday, November 19, when the Alice PAC voted for "no recommendation" in the race. The club's members approved the stance during a virtual meeting Monday, November 22, and also sided with the PAC's recommendations in the other two races.

(At its December membership meeting the Milk club will be holding its endorsement vote on the assessor-recorder race and the school board recall.)

"Both David Campos and Supervisor Matt Haney have worked with the Alice club and San Francisco's queer community, so neither candidate was able to clear our 60% threshold for an endorsement last night," Alice co-chairs Catie Arbona and Gary McCoy stated to the Bay Area Reporter. "The club will still be active in the race — we hope to hold a debate with our sister club Milk at a date to be determined — and will be out promoting our endorsed candidates and positions in the assessor-recorder and school board recall races."

Two other candidates, both straight, are also seeking the Assembly seat that covers the city's eastern neighborhoods, including LGBTQ districts in the Castro, Tenderloin, and South of Market neighborhoods. City College of San Francisco trustee Thea Selby and former Obama administration staffer Bilal Mahmood are seen as being the more moderate of the quartet of Democratic contenders to succeed former assemblymember David Chiu.

Chiu resigned this month in order to become San Francisco's first Asian American city attorney. Also a Democrat, he is expected to remain neutral in the contest to succeed him in the Legislature.

For Campos, this is his second bid for the seat, having lost to David Chiu in 2014. Should he win the race Campos will not only return LGBTQ leadership from San Francisco to the Legislature's lower chamber, he will be the first Latino assemblymember from the city.

"The voters of District 8 should expect a whole lot of campaigning in the next few months and a lot of knocking on their doors," said gay District 8 Supervisor Rafael Mandelman, who is personally backing Campos in the Assembly race.

As of now, Mandelman told the B.A.R. he doubts most residents realize there is a special election for the Assembly seat. Nor should anyone think that LGBTQ voters would all cast their ballots for Campos, Mandelman added, because he is the only LGBTQ candidate running.

"I am not sure people even know there is a race," he said. "I think LGBT people generally, in the abstract, understand the importance of queer representation in elected office. But I do think they always view every election separately and, as voters, they don't always vote that way."