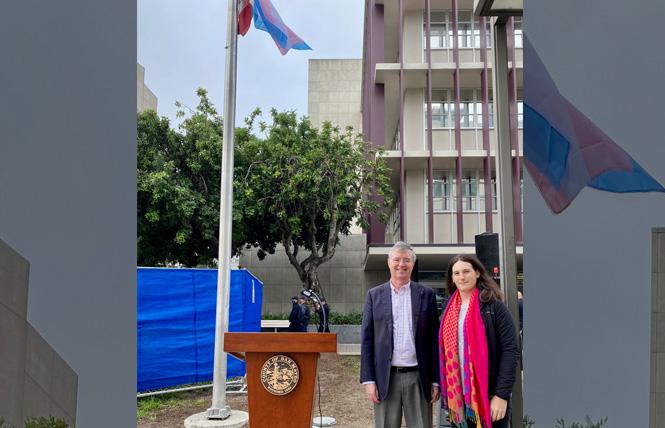 The LGBTQ Commission in San Mateo County will hold a virtual event in observance of Transgender Day of Remembrance Friday, November 19, from 5 to 6:30 p.m. The county raised the trans flag during an in-person event November 15 outside the County Center in Redwood City.

The San Mateo County Pride Center, which operates as a program of StarVista, will collaborate on the TDOR event, noted Tanya Beat, director of the LGBTQ Commission.

Bay Area speakers for the virtual event will include Anjali Rimi, founder of Parivar Bay Area; Blossom Brown, coach and activist; and Sera Fernando, chief delivery officer for Silicon Valley Pride. They will be in a moderated panel with Dana Johnson. Poets Dena Rod and Hilary Cruz Mejia will also be appearing, and introductory remarks will be delivered by trans Lutheran Bishop Megan Rohrer. Beat said that the commission is transitioning TDOR to include resilience along with remembrance.

TDOR was started by Gwendolyn Ann Smith 22 years ago as a way to call attention to anti-trans violence. Smith also writes the Transmissions column for the Bay Area Reporter and this week noted that there have been 46 anti-trans killings in the U.S. so far this year. (See Transmissions.)

For more information about the virtual event and to register, click here.

As the Bay Area Reporter noted in last week's News Briefs, Rohrer will be participating at another TDOR event in the Bay Area on November 20.

A news release stated that 2021 has been reported "the deadliest year for the transgender community" globally, with over 375 trans people reported killed across the world, according to the Transgender Murder Monitoring report for November. Of the 46 trans people killed so far in the U.S. this year, they have overwhelmingly been Black trans women.

"With over 375 transgender people's lives being taken this year, it is important that the world, namely our allies, siren that the pandemic of society often unaddressed is a culture of transphobia," stated Aria Sa'id, president and chief strategist of the Transgender District. "There's a way that people believe that because we are more visible, and more of us are empowered, that the genocide of transgender people, especially transgender women of color, isn't as pervasive as it is. We're still very much fighting for the ability to breathe, and exist, in a world and planet that simply does not want us to."

Jupiter Peraza, director of social justice and empowerment initiatives with the district, stated that while TDOR is a day to honor and remember those lives lost, more is needed.

"However, it is also a day in which we call on our government to address an epidemic of discrimination and violence against a historically marginalized community," Peraza stated. "We cannot allow these violent and fatal occurrences to continue without proper and transformative justice."

To learn more about the Transgender District, click here.

TDOR event in East Bay
The Rainbow Community Center in Contra Costa County will host a Transgender Day of Remembrance event Saturday, November 20, at 7 p.m. The in-person remembrance will be held in the social hall at East County Shared Ministry, 200 E. Leland Road in Pittsburg. Masks are required and physical distancing will be observed.

The observance will honor those who have lost their lives to anti-transgender violence, discrimination, or suicide, a flyer stated.

A number of local churches and synagogues are co-hosting the event.

For those who can't make it, they can join live on Zoom.

Club OMG gets HRC, Showtime grant
Club OMG, an LGBTQ bar in San Francisco's South of Market neighborhood, is a recipient of a small business grant from the Human Rights Campaign and Showtime.

The Queer to Stay: An LGBTQ+ Business Preservation Initiative supports and uplifts small businesses that focus on LGBTQ+ people of color, women, and the transgender community and have been impacted by the COVID-19 pandemic, a news release stated.

"It is crucial to preserve affirming, welcoming spaces and services for LGBTQ+ people. This initiative celebrates and supports the community by identifying and donating to multiple marginalized LGBTQ+-owned and —serving small businesses around the country," stated Nicole Cozier, HRC senior vice president for diversity, equity, and inclusion.

HRC spokesperson Aryn Fields could not say the amount of the grant.

"We aren't able to give the exact figure, but I can say it is enough to help a small business get through a few months of bills/rent," Fields stated in an email to the B.A.R.

Club OMG was shut down for 15 months due to the pandemic. The release stated that the grant will keep the bar from closing.

Rakesh Modi, co-owner of Club OMG, stated that the establishment provides a safe space to the LGBTQ+ community, "especially the Latinx queer community."

"The club provides a source of livelihood for several transgender Latina and drag Latin performers," Modi stated. "It is also a safe space for the predominantly immigrant community to come together; to have a sense of belonging; and to find like-minded folks who speak their language and come from the same cultural background to celebrate joys and festivals and to share loss."

Club OMG was one of numerous establishments across the country to receive a grant. Others in California include Cuties, Nickel Diner, Stuzo Clothing, and Ellen D. Management in Los Angeles and Gossip Grill in San Diego.

LGBTQ high school seniors can apply for scholarship
George Thomas Dave, the founder and CEO of kombucha company GT's Living Foods, has announced the inaugural Synergy Scholarship. The scholarship is now open to current California-based high school seniors who identify as part of the LGBTQ+ community. According to a news release, it is designed to empower educational opportunities within this community while encouraging aspiring businesspeople to achieve their dreams.

The scholarship, underwritten by the GT Dave Foundation, will fund a $250,000 commitment to help winners pay for higher education over the next five years, the release stated.

Dave, known as GT, came out as gay at 13. The release stated that through strength and perseverance, Dave, now 44, channeled his creativity, unique point of view, and identity into the company that today holds the rank as the number one kombucha brand in the world.

The application deadline is December 31. For more information and to apply, click here.