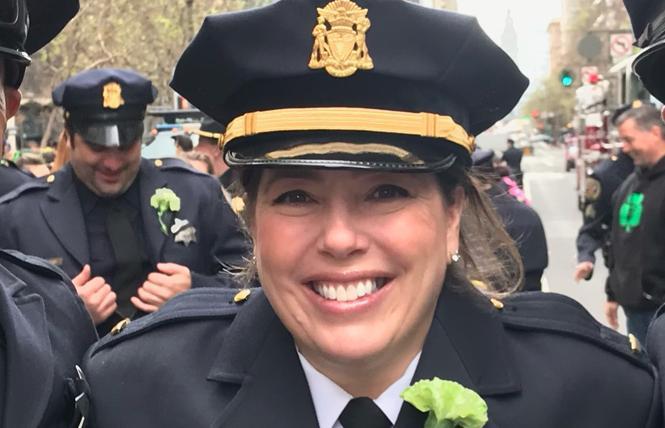 Moran, a straight ally, made the announcement she'd be leaving at the Castro Merchants Association meeting November 4, as the Bay Area Reporter previously reported.

In a subsequent phone interview, Moran told the B.A.R. that she'd been promoted to commander — one of eight citywide — also effective November 13 and would be taking the reins as commander of field operations for the SFPD's Golden Gate Division.

"I get basically half the city and the other commander also takes half," Moran said. "It's a good thing."

SFPD Chief William Scott, also a straight ally, stated to the B.A.R. that he has "every confidence" in Moran's "continued success on SFPD's command staff."

"Rachel Moran embodies the values of 'safety with respect' that SFPD stands for, and I think San Francisco residents and police officers alike have been incredibly well served by her leadership. I have every confidence in her continued success on SFPD's command staff."

Lieutenant Gavin McEachern, a 32-year veteran of the force, was Moran's choice to succeed her in an acting capacity overseeing Mission Station. McEachern served as head of the Honda motorcycle unit, the two squads of which patrol the city.

Moran had only been head of Mission Station since February 20, as the B.A.R. reported at the time.

"When I came, I'd told you it was like coming back home," she reminded the B.A.R. "It's very bittersweet to be leaving."

Moran said that she is "really touched at just how much the community cares for each other and how they want the community to be a good place to live or own a business."

She added how grateful she was to work with the officers at the station, which she said was one of the city's busiest.

Gay District 8 Supervisor Rafael Mandelman, whose district overlaps with Mission Station in the Castro neighborhood, paid tribute to her in a farewell statement.

"Over the past year I have had the privilege to work closely with Captain Moran on issues impacting residents and merchants in the Castro, Mission Dolores, and Noe Valley," Mandelman stated. "She has been a true and excellent partner in addressing the public safety concerns of the folks I represent."

The SFPD has not responded to an interview request for McEachern, and a question about the timetable for choosing a new permanent captain for Mission Station.