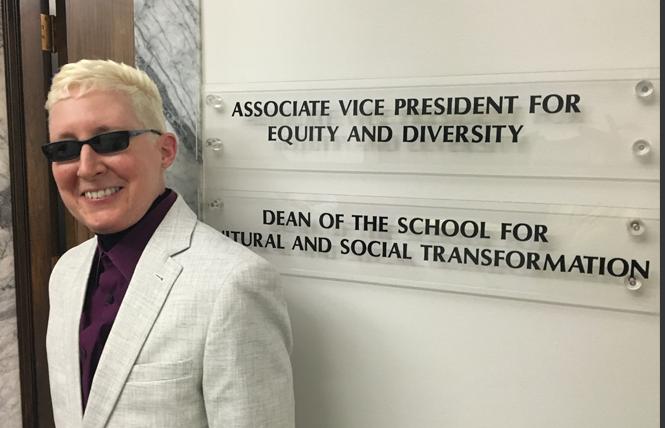 Kathryn Bond Stockton, a dean and English professor at the University of Utah, is author of "Gender(s)" published by MIT Press, 2021. Photo: Lisa Duggan

According to author and academic Kathryn Bond Stockton, "gender is queer for everyone." When she says "queer" she doesn't mean only in the LGBTQIA+ sense — she means the dictionary definition: strange. "Gender is strange," she writes, "even when it's played straight."

In her new book, "Gender(s)," she takes a questioning approach and encourages her readers to do the same. Stockton, a dean and English professor who teaches queer theory and theories of racialized gender at the University of Utah, asserts that gender is always racialized ("Gender norms in this country have been white norms") and is intimately associated with money.

In "Gender(s)" and on this week's Out in the Bay, she dismantles the concept of the gender binary, helps us understand the difference between "sex" and "gender," and argues that for many of us, our surfaces — from genitalia to hair and clothing — may disagree with our internal biological layers, our mysterious thoughts, our behaviors and our sense of self. Essentially, she contends, everyone's gender is queer in these ways.

She finds the concepts of "opposite-sex" and "same-sex" troubling, and definitions of masculine and feminine "confounding." For example, Stockton said if we attribute bravery to masculinity, "I would say that to grow another human being in your womb ... for nine months, and to have to get that little grown body out of you through a vagina strikes me as one of the bravest things I've ever heard tell of. So I just don't know where we'll get deciding which human traits are masculine or feminine."

Stockton also suggests on Out in the Bay replacing the term "cisgender" with "cis-surface." It's easy to see someone and based on appearance, presume them cisgender, she says, but we "don't know what goes on behind that surface ... I want to see a severing between that surface and that depth."

Stockton said of her partner: "If she would pass you on the street, you might think she was a normative woman in some way. But 'cisgender' definitely does not fit her. She's been partnered with a big ol' queer all this time, and she also has ways that in no way, shape, or form match her sex."