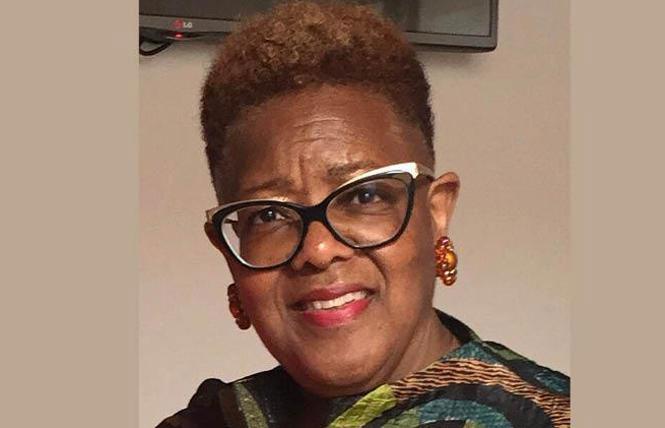 When I was a little girl, there was no Black History Month.

Born and raised in Oakland, I became aware of the stigma of inequality and injustice at a young age via the public school system, housing discrimination, and stories from my family. Today I am an out and proud 70-year-old (next month) Black lesbian, who has felt racism, sexism, homophobia, and ageism throughout my life.

Decades ago, my dad, Cleven "Goodie" Goudeau, took a bold first step. My dad was an award-winning art director, cartoonist, and artist, and created the first line of Black contemporary greeting cards. As a young Black male with talent and vision, his success was met with many challenges — he was denied employment and multiple opportunities because of the color of his skin. His desire to be recognized for his art did not occur until he created a greeting card for his mother. His mother was ill in the hospital, and he wanted a card for her that was different. He thought a Black card would be perfect but he could not find one for her. So he designed his own "Get Well" card. The doctors and nurses enjoyed it so much that this single Black greeting card found its way around the entire hospital.

Against all odds, Goodie Cards was created in 1963. Racism impacted his business in several ways: he had a hard time finding someone to print the cards; he was denied bank loans; and drug stores refused to carry the cards because they thought customers would not buy them and it would mean attracting Black customers to their white stores. The cards were finally placed at a local drug store owned by a Black man. The greeting cards contained such phrases as "Black is Beautiful" and "I'm Black and I'm Proud" — statements that voiced the style, lingo, and pride of African Americans during the 1960s and 1970s. As a teenager, I was reminded that Black is beautiful and I should not be ashamed. It's about Black pride; it's about feeling good for one another when the world condemns you for who and what you are.

I experienced and learned from my parents' determination, resilience, and progressivism. I may be biased, but my father ought to be part of Black history and commemorated for what he accomplished. He was the first in his field; he broke down so many barriers for others.

As we continue this year's Black History Month, let us recognize the stories of resilience, oppression, and triumph. Black history is American history. Let us honor the key figures in the Black community who helped make this country what it is today. Celebrate Black History Month every day and respect the foundation that it stands on. That foundation must also include Black members of the LGBTQ+ community.

In honor of Black History Month, we honor Black LGBTQ+ pioneers of the past and present, and celebrate their oft-forgotten contributions. These individuals, while often invisible or erased from the dominant White queer narrative, have been the heart of our struggle for rights and inclusion — they have paved the way for so many people of all races. It is important that the voices and stories of Black LGBTQ+ people be heard year-round.

This list in no way recognizes the accomplishments and contributions of all Black LGBTQ history-makers. Use it to learn, share, and be inspired to discover even more. And as February turns into March and March into April, and so on, let's carry Black History Month in all our hearts, minds, and political actions because we are all in this together.

2020 was an exceptionally painful and trying year for us all. It was also a time for reflection and awareness. We know that the 2020 hardships have followed us into 2021: the COVID-19 pandemic disproportionally threatening our vulnerable individuals, economic injustice, racism, police brutality, and particularly violence against our Black trans women.

Seeing the Biden-Harris inauguration last month, I had a sense of new beginnings and hope for the future. It is exciting that Kamala Harris is the first female vice president of the United States, and that she is the first Black woman and the first Asian American woman to serve in this role. President Joe Biden and Harris have promised to act quickly to pursue justice and equality. We must hold them accountable.

- Prioritize racial justice by forming a cabinet to address these issues — including Black Lives Matter and other Black-led organizations at the table.

- Pass the federal legislation called BREATHE Act — to divest federal funds from the main programs and agencies that have been fueling mass incarceration at the state and local levels.

- Address climate change and environmental racism — too many Black and Indigenous (BIPOC) communities are at greater risk of being exposed to toxic air and water.

- Vice President Harris should advocate for policies that support Black women and the Black community in general.

The majority of Americans voted for change and a new future. However, our work is far from over — we've got more to do!

Now more than ever, it is important that we work together and stand united as we lift each other up and pursue progressive and inclusive policies.

Brendalynn R. Goodall is a former president of the East Bay Stonewall Democratic Club. In 2020, Governor Gavin Newsom appointed her to the California Commission on Aging.