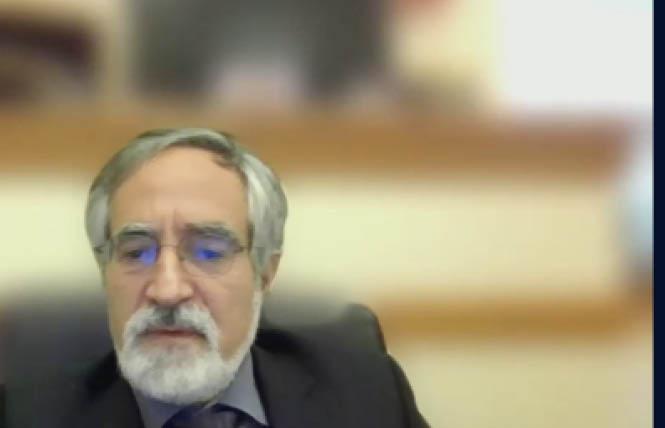 Seeking to improve pedestrian access, the San Francisco County Transportation Authority passed a plan to improve traffic safety in the Castro/Upper Market neighborhood — including at the iconic intersection at Castro and Market streets that has seen a number of pedestrian-vehicular collisions — at its meeting October 20.

As the Bay Area Reporter previously reported, at least four people were hit at the intersection in 2019 and, in response, gay District 8 Supervisor Rafael Mandelman pledged to seek improvements.

The proposal approved by the transportation authority will time the traffic signal at the intersection so that cars cannot turn left from Market Street south onto Castro Street until pedestrians have already crossed, creating a protected turn.

Mandelman voted in favor of the proposal, along with nine of the 10 other commissioners, after closing a gap of $500,000 that was needed to advance the entire Upper Market Safety project, of which this is part, with discretionary supervisorial funds. (The 11 members of the San Francisco Board of Supervisors serve as authority commissioners; District 9 Supervisor Hillary Ronen was excused from the vote. District 3 Supervisor Aaron Peskin serves as chair.)

"You shouldn't have to risk your life to cross Castro Street, and I have heard of too many scary incidents where pedestrians were hit or nearly hit in that crosswalk," Mandelman stated to the B.A.R October 20. "That's why I secured these additional funds to make sure the Upper Market Safety project included signal improvements to the Castro and Market intersection. These additional funds will also close a funding gap and advance the larger Upper Market Safety project, which will add safer crosswalks and bike lanes, new lighting, street trees and trash cans to the neighborhood. I'm proud to support this project and these improvements which will make the Castro a safer and more welcoming place for everyone."

"Market Street from Castro to Octavia is a busy, iconic corridor. It's also confusing, complex, and more challenging than it has to be — especially for pedestrians," Tumlin stated. "Thanks to strong support from Supervisor Mandelman and years of community engagement, the Upper Market project will make critical investments in multi-modal safety, ADA accessibility, civic design, and community identity."

By voting yes, the commissioners also voted to approve improvements at the Muni elevator north of Market Street, including accessible curb ramps and a crosswalk across 17th Street from the Pink Triangle Park. Pedestrians traveling south on 17th, adjacent to the park, currently have no safe way to cross and reach a dead end at Market Street.

"The project will better connect Pink Triangle Park and the station elevator to the heart of the Castro. It demonstrates the city's commitment to Vision Zero, good urban design and support for Upper Market businesses who contribute so much to the community and city," Tumlin stated, referring to the SFMTA's vision of zero traffic deaths in the city by 2024.

Further, the intersections at Laguna Street and Hermann Street — next to the LGBTQ senior community at Openhouse — and at 15th and Sanchez streets will be improved to make them "high visibility."

According to gay Mandelman aide Jacob Bintliff, this upgrade will be "similar to the brick crosswalk at Dolores and Market so cars have a visual cue to slow down."

The total Upper Market Safety improvements will cost $2.8 million and will be funded, along with a replacement of 28 paratransit vans, Vision Zero, and improvements on Fifth Street and Mansell Street in Visitacion Valley, by funds from the Proposition K sales tax, Proposition AA vehicle registration fees, traffic congestion mitigation taxes.

"The project overall includes pedestrian and bike safety improvements, and number of streetscape enhancements like new lighting, tree planting in the medians on Market, new trash cans and pit stops, and funding to extend the rainbow honor walk up Market from Castro," Bintliff told the B.A.R.

Further, the project includes bikeway expansions on Octavia Street at the Central Freeway, a widening of the Octavia plaza, and repairs to and extensions of the Rainbow Honor Walk.