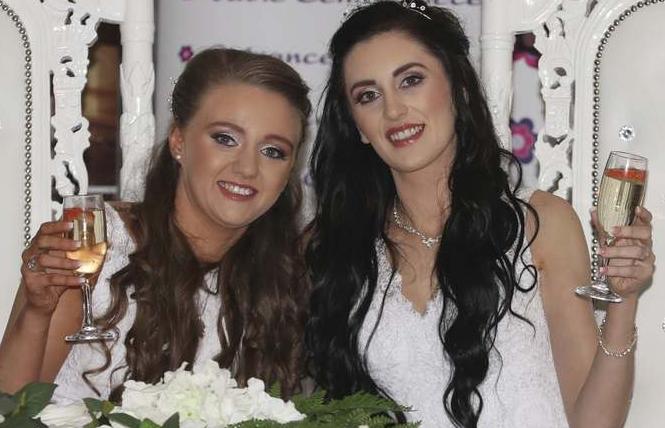 The brides both wore wedding dresses as they walked down the aisle, becoming the first same-sex couple to get hitched in Northern Ireland last week.

"We didn't set out to make history — we just fell in love," Sharni Edwards, 27, told Voice of America, in a statement released by the Love Equality campaign ahead of the nuptials.

"While this campaign ends with Sharni and I saying 'I do,' it started with people saying 'no' to inequality. By standing together, we've made history," added Edwards' wife-to-be, Robyn Peoples, 26.

Belfast native Peoples and Edwards, who is originally from Brighton, England, wed on February 11, their six-year anniversary, in Carrickfergus, a town outside of Belfast.

They were joined by an estimated 50 guests and celebrated with 100 people at their hotel reception, reported Time magazine.

Same-sex marriage was legalized in Northern Ireland on October 21, 2019.

It took six years of campaigning led by Love Equality, a coalition of six organizations, and a deadline by British lawmakers for Northern Ireland to come in line with the rest of the United Kingdom, which legalized same-sex marriage in 2014.

However, those same-sex civil partnerships cannot convert to marriages and people wishing to marry in churches don't have a provision to do so at this time, said John O'Doherty, director of the Rainbow Project, an LGBT organization in Northern Ireland.

Those two issues are a part of a public consultation that closes February 23.

Ireland, also known as the Republic of Ireland, is a separate country from Northern Ireland. It was the first country to win marriage equality through a public vote in 2015.

Registrations for Northern Ireland same-sex couples' intent to marry opened January 13. There isn't any data available on how many couples have actually registered, reported Time.

Peoples met Edwards, a waitress, when she was visiting her cousin and they were spending a night out on the town in Belfast.

"We instantly just clicked," said Peoples, a senior assistant at a care home.

The couple live in Belfast.

The women were in the process of getting a civil partnership last year. But when the same-sex marriage law passed, they decided to wait for it to go into effect. They expressed their gratitude for the people who fought for their right to marry.

"This means everything to us. Just to be married. This is my wife. I can finally say this is my wife," Peoples, of the newly minted Mrs. and Mrs. Edwards-Peoples, told reporters after their wedding, noted Reuters.

Paul McIntyre, 52, was arrested February 11 and charged with McKee's April 18, 2019 murder, as well as possession of a firearm with intent to endanger life and "professing to be a member of a proscribed organization," according to the February 12 police statement. The man was taken to Musgrave Serious Crime Suite, Detective Superintendent Jason Murphy stated.

The Guardian reported that in a 50-minute hearing attended by the murdered writer's partner, Sara Canning, McIntyre's defense team claimed the case against him rested solely on a "snapshot" of low-quality cellphone footage. McIntyre's next court date is February 27.

The three unidentified suspects, ages 20, 27, and 29, were initially charged under the Terrorism Act after the New Irish Republican Army claimed responsibility for McKee's death. The 20-year-old and 27-year-old were released pending a report to Northern Ireland's public prosecution service. The 29-year-old was released without charges, the paper reported.

At the time of her death, McKee, 29, was covering the New IRA when a riot ensued during the 21st anniversary of the Good Friday agreement in the heavily Catholic Creggan neighborhood in Londonderry. She was standing by a police vehicle when a single gunman fired shots into a residential area.

A rising star in journalism, McKee's death caused a wave of shock, outrage and grief that reverberated from Belfast's queer community to politicians in Britain, Northern Ireland, and Ireland.

In the police statement, Murphy said, "I have always said a number of individuals were involved with the gunman on the night Lyra was killed, and while today is significant for the investigation the quest for the evidence to bring the gunmen to justice remains active and ongoing."

He continued to call for witnesses to provide evidence in McKee's death.

McKee planned to ask Canning to marry her during a trip to New York that the couple never took.

Canning attended a celebration of the legalization of same-sex marriage in Northern Ireland in the evening of February 11 in London.

"Of course, this historic moment is a little bittersweet. It had been our dream too," Canning told Voice of America in a statement about Northern Ireland's first wedding. "Lyra and I should have been an engaged couple now, planning our own wedding day."

Eleven couples exchanged vows at a park in the Miraflores district of Lima.

"It is like a protest to the Peruvian state because it is really time for the country to have a civil union marriage which we, as Peruvians, really deserve and have the right to receive," Juan Carlos Martinez, who took part in the ceremony with his partner, told the New York Times.

Peru, which is majority Catholic, is one of a handful of South American countries that doesn't legally recognize same-sex couples' relationships.