Jock Talk: 2010-19 in sports: A decade of unfulfilled promise 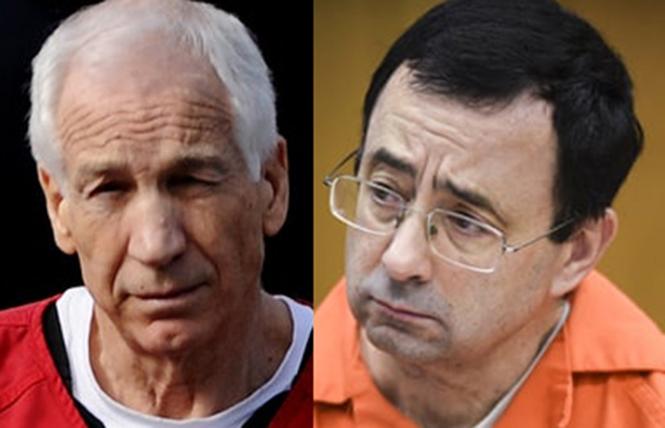 Jerry Sandusky, left, and Larry Nassar were two of sports sexual predators during the last decade. Both are now in prison.

The 21st century has been going through its adolescent years the past decade, swiftly zipping in and out of its teens to enter 2020 as a young adult, fully capable of voting, driving, and spitting into the wind. Time to look at the sports decade just passed and the one about to unfold.

In 2010, the second World Outgames, held the previous year in Copenhagen, announced it had turned a profit. By comparison, the Cologne Gay Games in 2010 saw a decline in registration, triggered in part by its insistence on a mandatory drug-testing policy that kept athletes away in droves; Cologne eventually reported a six-figure debt. Oh, and the Federation of Gay Games had a messy divorce with the Cleveland bidding group that had signed an agreement to hold the Gay Games in 2014 and set up a new deal with different organizers in that city. Meanwhile, officers from the FGG and the Gay and Lesbian International Sport Association were in the beginning stages of talks about ending the rivalry between their events — talks that would drag on for years and alienate some Gay Games supporters into dropping the organization from their wills.

Also in 2010, an International Olympic Committee panel recommended that intersex women be allowed to compete in women's sports only if they undergo medically unnecessary surgical mutilation. In a process that would trigger seemingly endless investigations, allegations of corruption, and expulsions from the sport, the international governing body for soccer awarded the 2018 men's World Cup to Russia and the 2022 tournament to Qatar: one country embroiled in drug scandals, the other with virtually no soccer tradition to speak of, both with dismal records of human rights, especially for LGBT individuals. At the time, I wrote it was a "decision that grates on sensibilities like a stadium full of vuvuzelas."

Oh, and on the local front, the Golden State Warriors held their first LGBT Night and the San Francisco Giants won their first World Series since moving to California.

Much of what followed the next few years is a blur. Penn State's Jerry Sandusky and Michigan State's Larry Nassar became poster boys for sexual predation in sports. The Giants and the Warriors both dominated their sports in the decade, each winning three championships.
Tiger Woods had a meltdown in Florida in late 2009 and spent most of the next few years trying to resurrect his personal life, his professional career, and his health.

Numerous new LGBT sports organizations were launched, including You Can Play, Athlete Ally, and Equality Coaching Alliance, but an effort to pull them all together, the LGBT Sports Summit, petered out within a few years. Jason Collins became the first active openly gay player in the NBA, Robbie Rogers came out in pro soccer, and Michael Sam came out before briefly joining the NFL. The IOC said it would allow transgender athletes to compete without reassignment surgery and would force the track and field federation to justify blocking women with naturally high testosterone from competing.

The NCAA and the NBA boycotted North Carolina over a transphobic bill and Colin Kaepernick used protests during the national anthem to call attention to violence against African Americans. The NFL came down with a headache over brain injuries and political protests that just wouldn't quit.

Ten years later, how much has changed?

Well, the World Outgames collapsed under its own incompetence, but not before leaving hundreds of LGBT athletes stranded with the cancellation of the 2017 event in Miami. The Gay Games bounced back with profits in Gay Games IX in Cleveland and Gay Games X in Paris.

Track and field never did come up with sound science to justify blocking intersex and transgender athletes, but nevertheless was allowed to restrict the participation of some runners. Other sports such as powerlifting are looking to prevent the inclusion of transgender athletes, IOC policy be damned.

A new investigation into the World Cup bidding process has been started in France and Russia remains embroiled in doping scandals.

Sandusky sits in prison, not eligible for parole until 2042. Nassar is in federal prison in Florida, not eligible for release until 2069. Yet report after report indicates that sports federations continue to enable sexual predators, who sometimes relocate or are banned by a sports organization but that is later overturned or revoked.

Rumors continue to abound that a major male sports superstar will come out of the closet soon ... but we are teased with this every year. Increasingly, women have been joining the coaching ranks of major men's sports teams, and the NBA seems closest to having its first female head coach. North Carolina came out with a revised bathroom bill activists said offered even less protection than the first bill and the sports groups came flocking back. The NFL has been able to divert attention from the protests and catastrophic injuries with incredibly bad officiating.

Woods won the Masters Tournament in 2019.

It's anybody's guess what the new decade will bring. College athletes paid not off the books but actually on team payrolls? Megan Rapinoe taking a break from a congressional run to coach the U.S. men's soccer team? The Gay Games serving as the surprise event that restores social bliss to Hong Kong? The Russian Olympic sports organization winning the Nobel Prize in chemistry? Policy makers in track and field finally realizing that human rights actually matter in sports?

I won't hold my breath for any of it, but I will as always hope and advocate for progress.

Beats spitting into the wind.