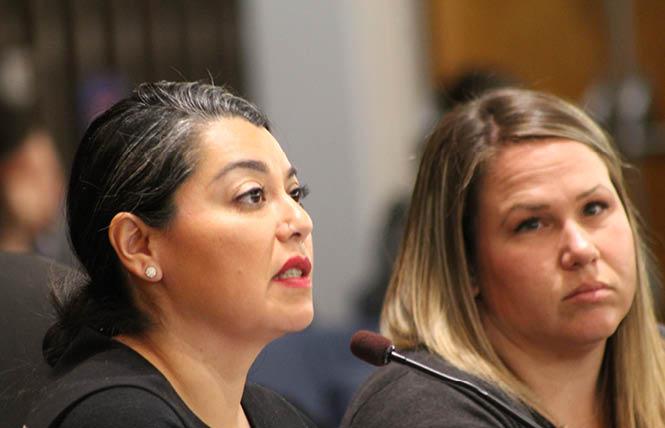 Two separate projects that will expand future LGBTQ services in the South Bay got a boost this week by the Santa Clara County Board of Supervisors.

The 5-0 votes occurred at the board's December 10 meeting.

The board tentatively approved the county's Office of LGBTQ Affairs to move forward with its proposed two-year plan for the creation of an LGBT wellness center. The office's team had spent a year conducting an intense community needs assessment for the project.

The supervisors requested the office return with a detailed budget and plan for moving forward.

The supervisors also approved $300,000 for a two-year senior LGBTQ pilot program in partnership with Avenidas, a Mountain View senior center.

Additionally, the board approved the LGBTQ affairs office to conduct a countywide LGBT senior survey.

David Campos, a deputy county executive, and Maribel Martínez, director of the LGBTQ affairs office, were pleased with the votes. Joining them at the meeting were Julie Solomon and Valerie Stinger of Mountain View and Palo Alto's human relations commissions, respectively.

The county is seeing a board that is "very committed to these issues" and "continues to be a leader when it comes to LGBT issues," Campos, a gay man and former San Francisco supervisor, said outside the board chambers following the vote. With the departure of gay county supervisor Ken Yeager due to term limits in January, Campos was referring to questions some had about whether the board, which now has no out members, would continue to prioritize LGBTQ services.

Santa Clara County estimates that its 2017 LGBT population was 4% of its 1.9 million residents, according to the Gallup and the United States Census Bureau data, respectively.

According to the Williams Institute, an LGBT think tank at UCLA School of Law, California's LGBT population was approximately 5.3% of the state's 39.56 million residents as of 2018. Those figures are based on the census and the Gallup Daily on its interactive population map.

Santa Clara supervisors and the LGBTQ affairs office recognize that a large percentage of the South Bay's LGBT community lives in San Jose, the county's hub with 1.035 million residents as of 2017, according to the census.

The leaders also know that there are other areas where community members reside and need services. Santa Clara County stretches from Palo Alto to Gilroy, north to south, and Los Gatos and Milpitas, west to east.

Proposing the future
Martínez, a two-spirit queer woman of color, presented the two proposals to the supervisors with the support of Campos and Alicia Anderson, senior health care program manager of the county's Behavioral Health Services department.

Martínez laid out to the supervisors a strategic plan to implement a hub, spoke, and route for access to, and provision of, multiple services for the wellness center and the LGBT senior pilot program and survey.

For the wellness center, the supervisors, Martínez, and Campos expressed the same concerns about funding and fiscal sustainability, location, and services for at-risk communities.

Board of Supervisors President Joe Simitian praised the LGBTQ affairs office for its work partnering with Avenidas, which is in his District 5. Using the senior center as an example, he urged the office to be "opportunistic" and "entrepreneurial," and expressed concern about lost opportunities staying within the boundaries of working with other government agencies.

"We should encourage you to be entrepreneurial, go out and make something happen," he said.

KQED reported that the board approved the purchase of the hospital, along with the Saint Louise Regional Hospital in Gilroy, in October.

Chavez also spoke about creating centers or services in neighborhoods where there's a high LGBT population and getting services to the community quickly.

District 3 Supervisor Dave Cortese expressed concern about violence against the transgender community and noted he's aware that the county has a transgender assessment underway.

Campos told the board that addressing the transgender community's needs is a "personal passion of mine."

The South Bay currently doesn't have a transgender organization advocating for the community's needs. The LGBTQ affairs office's transgender expert position has been vacant since the end of 2018.

"No factors are in place for an organization to happen organically, so the county has to step in and create an organization," Campos said, adding he will be back with a proposal for a survey and a budget.

Chavez expressed concerns for funding, not only for launching the wellness center, but also sustaining it in the future.

Discussing the challenges and successes of building and maintaining San Francisco's LGBT Community Center, Campos addressed Chavez's financial concern, stating, "The goal here is not just what it looks like at the beginning, but how do you sustain it throughout?"

Chavez requested Campos and Martínez return to the board with a budget and a mechanism for funding the wellness center.

Encouraged
"This gives us the green light to think outside the box," said Campos about the supervisors' comments. "The message is clear they want a center that is in a great location for the community [and] that is innovative."

Martínez, who said next year the community will see much more from her office, was also encouraged by the board's vote and calling on her office to act quickly on behalf of the county's LGBT community.

The approval for her office's work was a "great way to end the year in a very hopeful and enthusiastic way and gives us much promise for 2020," she said.