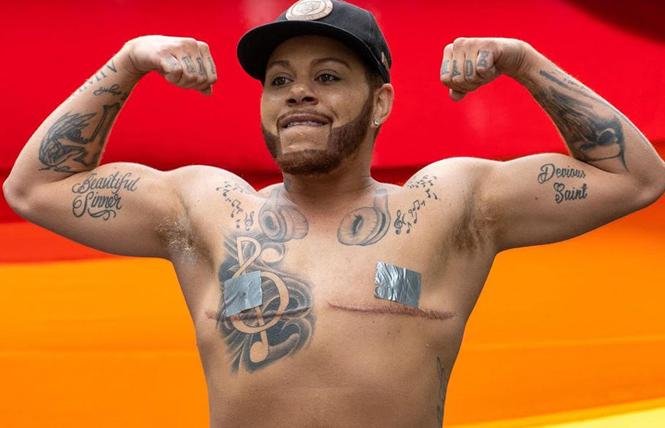 I've never been one to call attention to myself but admired those who were willing not just to put themselves on display, but deliberately put themselves out there to be judged. I have respected the vision and the discipline it takes to sculpt and build out one's own flesh into a beautiful display of symmetry, proportion, and elegance. I've also mourned the deaths and ailments so often triggered by those who use chemical crutches to cheat their way to their goals.

Now, transgender bodybuilding is giving me an entirely different reason to enjoy the sport. In this context, even scars are beautiful, reminders of the physical and psychological challenges for the athletes to lay claim to their own bodies.

Frameline hosted last weekend in Oakland a free screening of "Man Made," an award-winning 2018 documentary focused on four transgender male bodybuilders who competed in Trans FitCon, an annual all-transgender bodybuilding competition in Atlanta. It is a compelling film that goes past the headlines and political lenses through which so many of us gain our knowledge of transgender issues and delves into the pain, the joy, and the journeys of self discovery necessary for some individuals to navigate to free themselves from the grip of the imperfect gender binary.

After the film, I got the chance to chat with one of the competitors from the film, Dominic Chilko, and what bodybuilding meant to him as a transgender man.

"Bodybuilding gave me the opportunity to build the body I always dreamed of before I was even able to be on hormones as well as throughout my transition," Chilko, 28, said. "I learned what my body is capable of through bodybuilding. I learned patience and how to push myself past my usual comfort zone to achieve my goals."

During the course of the film, Chilko meets his biological mother and has his breasts surgically removed. It is the loss of the breasts rather than finding his mother that seems to have the more emotional punch; the moment Chilko sees his new reflection, the first time he sees himself with his eyes the way his heart has always seen him — well, it is a gut punch that is the emotional peak of the film.

And then he and the other bodybuilders put themselves on display for all the world to see and judge.

"It is strange because the way you see your body may not be the way the judges see your body," Chilko said. "It takes a strong individual to stand up there and be judged in front of a crowd of people. It's not for the light-hearted."

The film is available through Amazon and iTunes. For more information on the documentary, visit http://www.manmadedoc.com.

Race check-in will be at 9:30 a.m. outside the Lookout at 3600 16th Street. The run begins at 11 and finishes at noon with a block party and fashion show.

For registration and other information, visit http://www.santaskivviesrun.org

Spurs make history — sort of
At first the headlines coming out of the San Antonio Spurs' loss to the Portland Trail Blazers were crystal clear and dramatic: when Spurs head coach Gregg Popovich was ejected in the third quarter of the eventual loss, Becky Hammon stepped in to lead the team the rest of the way, making her the first woman to act as head coach in the NBA and, indeed, the first woman to serve as head coach of any of the U.S. major men's professional teams.

The Spurs later said Hammon was just one of three coaches who led the team after the ejection, and Popovich himself said the actual acting head coach was former NBA superstar Tim Duncan.

Regardless, the presence of women coaches in men's pro sports, although still negligible, is growing and the NBA so far seems closest to actually making the eventual breakthrough. Hammon, hired by the Spurs in 2014, led the team during the summer league season; and Nancy Lieberman led an NBA development team in 2009 before being hired as an assistant by the Sacramento Kings in 2015.