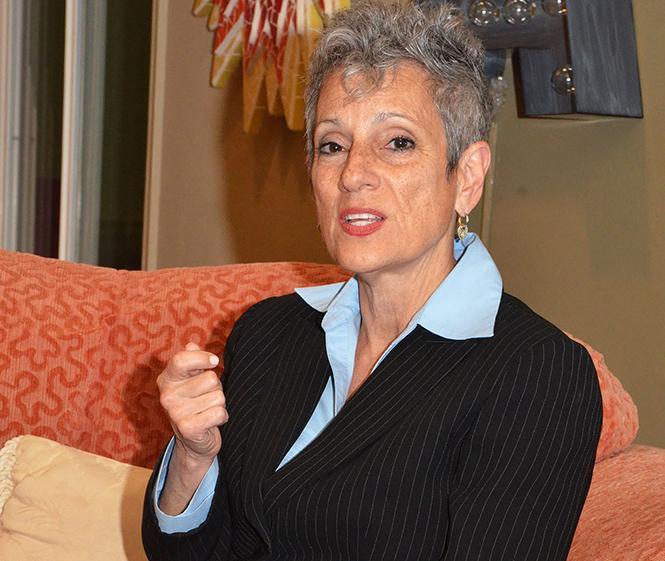 As expected, Governor Gavin Newsom scheduled the special election for an open California Senate seat that includes the LGBT mecca Palm Springs to coincide with the March 3 primary. At least one out candidate is seeking the 28th Senate District seat, lesbian aging policy expert Joy Silver, while several others are pondering runs.

Newsom on Friday also announced that the special election to fill the state's 25th Congressional District seat north of Los Angeles would also be held March 3. The seat was vacated last month by bisexual former congresswoman Katie Hill, who resigned rather than face an ethics probe into allegations she had a relationship with a congressional aide after a conservative news site published a story about her alleged affair, which she has denied.

Other private photos published by a British newspaper showed Hill nude with a female campaign staffer that she and her now estranged husband reportedly were having a three-way relationship with. Hill and her husband are now in a bitter divorce fight.

Hill's departure from Congress leaves the Golden State with just one out member of the California congressional delegation. No LGBT candidate has said they will run to replace her on Capitol Hill, and the statewide LGBT advocacy organization Equality California has endorsed Assemblywoman Christy Smith (D-Santa Clarita) in the race.

If no candidate in either of the special state Senate and congressional races wins more than 50% percent of the vote March 3, then the top two vote-getters in the contests will advance to special runoff races May 12.

The state Senate seat represents a large swath of Riverside County, including several Coachella Valley cities that attract LGBT retirees and vacationers. It is vacant due to the November 1 resignation of former state Senator Jeff Stone (R-La Quinta). He left to join the Trump administration as the western regional director in the Department of Labor.

Silver narrowly lost to Stone last November and had already announced she planned to run again in 2022 for the 28th District seat. She has yet to return the Bay Area Reporter's requests for comment about running two years early.

Transgender Palm Springs City Councilwoman Lisa Middleton is also considering a run for the seat. She could make history if she does enter and win, as she would be the first trans person to serve in the state's Legislature and be the first transgender state senator in the country.

As of Friday afternoon, Middleton had yet to announce a decision and had not returned a call seeking comment. Her council colleague Christy Holstege is reportedly also looking at the race; should she enter and win she would be the first out bisexual to be elected to the Statehouse.

The one other Democrat to declare their candidacy for the seat is Riverside County Board of Education member Elizabeth Romero.

As for the Republicans, Assemblywoman Melissa Melendez (R-Lake Elsinore) has declared her candidacy and several others are considering bids. Should she win, Melendez would only be able to serve in the seat through 2022 due to term limits.

Republican Temecula City Councilman Matt Rahn had initially received Stone's endorsement but he has since dropped out of the race and endorsed Melendez, as did Stone. Rahn is expected to seek the seat in 2022.

Palm Springs to lose all-queer council
As for the Palm Springs City Council, it will no longer have all LGBT members, no matter if Middleton or Holstege depart for the state Legislature next spring.

In order to head off being sued by groups who had argued that the citywide elections for the four council seats and a mayor impeded minorities from being elected to the five positions, the council decided to convert to a district-based system and scrap having an elected mayor. The mayor title will now rotate among the five council members elected by district.

Grace Elena Garner will serve as the new District 1 council member and will be the first Latina city councilwoman in Palm Springs. A second-generation resident of the city, she serves on the Palm Springs Planning Commission.

Dennis Woods, currently chair of the city's planning body, will be the new District 2 city councilman. He moved to town in 2012 from Santa Monica and lives in the Little Tuscany neighborhood with Robert Rotman, his husband of 21 years.

Woods posted about his win Friday evening on Facebook.

"Please accept my deep and abiding thanks for your support during my campaign for the Second District City Council seat — I could not have won without you," he wrote.

He added, "Perhaps the most gratifying aspect of my campaign was the warmth and dedication I encountered everywhere I went. In forums, in living rooms, on sidewalks, in letters, emails and messages, I met hundreds of thoughtful, concerned and devoted neighbors, all of you committed to the well-being of our community. It was critically important to our effort to learn so much from you. Your ideas and concerns energized me and taught me much."

Woods wrote that he would continue to "listen and learn" from constituents.

"From the first day of my tenure on the City Council to the last, I will continue to do exactly that," he wrote. "It is my hope that you and your neighbors will continue to share your ideas, your thoughts and, yes, your complaints with me. Most critically, you taught me the meaning of representation and prepared me for office.

"Representing the 2nd District is my first and foremost priority," he added. "Together, we will make Palm Springs even greater than it already is."

EQCA had endorsed Woods and Garner as well as the re-election of gay City Councilman Geoffrey Kors, elected four years ago and currently serving as mayor pro tem. He will now serve as the District 3 city councilman.

Mayor Rob Moon and Councilman J.R. Roberts, gay men who both live within the boundaries of District 3, opted not to seek re-election and will be leaving the council. The elections for the new District 4 and District 5 council seats will be held on the November 2020 ballot.

In a note to his supporters last week, Kors thanked them for helping to re-elect him to what will be "the most diverse" city council in Palm Springs history.

"As I look toward the future, I will continue to work on the issues that we care about. From investing in our parks, increasing housing that is affordable, ensuring inclusion and diversity, funding public safety, growing our economy, creating good paying jobs and addressing homelessness, there is still a great deal to do," wrote Kors, who celebrated his victory and the birthday of his husband, James Williamson, with a trip to Egypt last week. "But there is nothing we can't achieve if we work together."