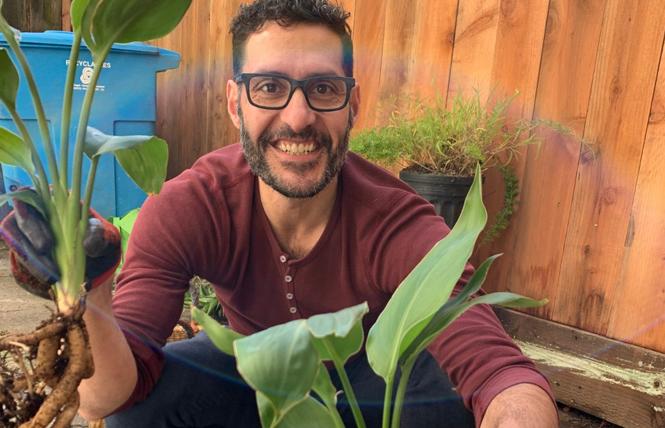 Sergio Lobito, who lives in Southern California, has received help from a former classmate through the sales of T-shirts. Photo: Courtesy GoFundMe

Until recently Sergio Lobito was working as a landscaper in San Francisco and starring in the wildly popular drag parodies of television shows. He portrayed the love interest known as "Mister Big," for instance, in the campy retellings of the hit HBO show "Sex in the City."

But a few months ago he moved back to Orange County in Southern California to be closer to his family, having grown up in Fullerton. Lobito, 43, who is gay, was diagnosed with congestive heart failure and is now awaiting a heart transplant.

"They don't know for certain what is causing it. My dad had it as well, so I think it is genetic," said Lobito, who spoke to the Bay Area Reporter earlier this month while recuperating in the hospital after being treated for a blood cot.

He now has an LVAD device that has taken over the function of the left side of his heart. His doctors have cautioned that he could be waiting up to two years for a new heart.

"Yeah, basically I am waiting to get a heart transplant," said Lobito, adding that having the LVAD "hurts when I cough, but it keeps me alive. I still have a story to tell."

Half a world away in Frankfurt, Germany, Kevin Halfhill read about Lobito's situation via a social media post. The two attended high school together, and Halfhill reached out to Lobito's twin sister to offer his support.

Last year Halfhill, who is also 43 and a gay man, launched an online-based clothing company called KaiOnyx via which he raises money for various nonprofits, such as PFLAG National and the National Center for Transgender Equality. Depending on the product purchased, anywhere from 30% to 60% of the profit from the sale is donated to a charity.

After speaking with Lobito's family, Halfhill created a special page on his website at https://kaionyx.com/shop/sergio/ where people can buy select clothing and a percentage of the profit will be donated to Lobito to help defray his hospital bills. Halfhill would like to raise at least $10,000 for his former school classmate.

"It is my first non-organizational fundraiser," he told the B.A.R. during a phone interview in early November.

Lobito told the B.A.R. that he is flattered to know a passing acquaintance from his childhood is now helping to raise funds to help him with his medical costs.

"I feel really blessed and honored that someone through social media saw what was happening and wanted to help," he said. "I am going to assume I affected his life enough that he wanted to do something for me and he is in a position to do that. It is very flattering."

Friends have also launched a GoFundMe page on behalf of Lobito at https://bit.ly/2OetE3A

"If you're feeling the need to help financially that's much appreciated. But just positive thoughts are just as welcome," Lobito wrote this week on his personal Facebook page. He added, "Crossing my fingers for a February heart. Those are the best I hear." 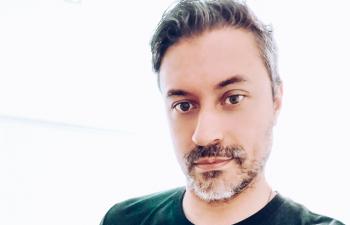 A love of T-shirts
Halfhill has always been fond of using apparel to spread a message and dreamed of having his own T-shirt company.

"I always liked the idea of putting ideas on clothing and having ideas worn by people," he explained. "I love the idea, and T-shirts are very affordable ways for people to express complicated ideas or things about themselves."

He started out as a designer of websites for nonprofits mostly and a decade ago moved to Europe. Four years ago he decided to pursue his dream of designing clothes.

In 2016 he created an online clothing site called Animalia Collective, now found at http://www.ShopForGiraffe.com, as a way to raise money for the Giraffe Conservation Foundation. The success of that venture led him to then launch KaiOnyx, which is just a made up name and doesn't refer to anything specific.

"I always wanted a company like this, I just never thought I could do it. Then it was successful," said Halfhill, who was encouraged by the positive reactions he would receive from people to the T-shirts he designed for himself. "I thought why not expand this into something larger and do something positive for the community I am involved in. That was the impetus to create this website."

The company is headquartered in Los Angeles and the final clothing products are all produced in the U.S. though the T-shirts he prints his designs on are made overseas and certified as ethical and free trade garments, he said. He sells mainly to American customers but increasingly receives inquiries from Europeans; his clothing can only be bought via his website.

"I would say it is meeting my expectations," said Halfhill of his apparel business, which he hinted he has "exciting things" planned for in 2020.

His brand, said Halfhill, is centered on the ideas of self-empowerment and identity. He favors a vintage design aesthetic and has several designs specifically for the holidays that play off the word "hung" and the "Santa Daddy" persona. (Prices vary from $23 to $35 for the tees or $85 to $88 for a hoodie.)

"Some I think are sexy but satirical," said Halfhill of his designs, such as his "Pure Organic Cock" limited edition T-shirt.

In launching his clothing site, Halfhill wanted to make sure it was welcoming to transgender and gender non-confirming shoppers. To do so, he eschewed categorizing his apparel as items for men or for women and instead labeled them as either masculine, feminine, or for everybody. The terms are needed so customers can select them to filter the clothing by apparel cut, as certain T-shirts are designed to fit the contours of specific body types.

"It is not that big a deal to do so and use trans-friendly terms," he said. "I welcome everybody to the site. But I think when we are a member of a community, I just think that everybody has to stand together."

Castro to herald in the holidays
The annual lighting ceremony for the Christmas tree in San Francisco's LGBT Castro district will take place at 6 p.m. Monday, December 2. Erected in the plaza fronting the Bank of America branch at Castro and 18th streets, the tree is just one of the many holiday decorations that the Castro Merchants business association installs to lure shoppers to the commercial district.

In recent years that has included the placement of an oversized menorah at Jane Warner Plaza, the public parklet on 17th Street at the intersection of Castro and Market streets, in celebration of Hanukkah. Its lighting ceremony, co-hosted by the merchants group, Congregation Sha'ar Zahav and the Castro/Upper Market Community Benefit District, will take place at 6 p.m. Wednesday, December 18.

Throughout the holiday season bright red and silver bows will again adorn the Upper Market Street median palm trees from Castro to Valencia streets. The merchants group is also encouraging people to come to the neighborhood November 30 for the yearly "Shop Small Saturday" event in support of locally owned stores.

"Sparked by our Holiday Promotions, this coming season can be a major success as people visit us to Shop, Drink and Dine in the Castro!" noted Realtor Masood Samereie, the current president of Castro Merchants, in a recent email.