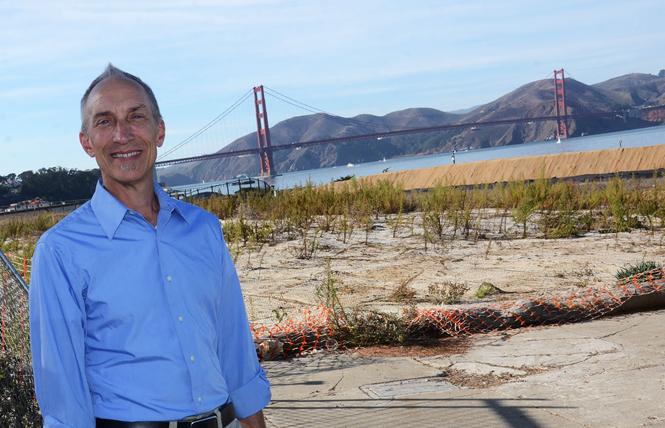 Michael Boland, chief of park development and visitor engagement for the Presidio Trust, stands atop the tunnels that replaced the former Doyle Drive leading to the Golden Gate Bridge. Photo: Rick Gerharter

Visit any national park site in San Francisco and you will likely encounter a vista that has been shaped in some manner by Bay Area native Michael Boland.

Throughout his career as a landscape architect Boland, 57, has played a role in designing the National AIDS Memorial Grove carved out of a dell inside the city's Golden Gate Park; establishing the overall development plan for the defunct prison grounds on Alcatraz Island; and restoring the decommissioned airfield at Crissy Field into a bayside aquatic haven within the Golden Gate National Recreation Area. His latest project will transform 14 acres inside the Presidio into new parkland atop highway tunnels that replaced the former Doyle Drive.

The elevated freeway that led motorists off the Golden Gate Bridge into the city's Marina district was demolished and replaced with the ground level Presidio Parkway. Crews covered the enclosed sections of the roadway with dirt in preparation for the creation of new public green spaces set to open in fall 2021.

As chief of park development and visitor engagement for the Presidio Trust, a job he has held since 2001, Boland is working closely with the firm James Corner Field Operations and federal park staff on the $118 million addition to the former Army base-turned-national park site on the northwestern edge of the city. The official "groundmaking" ceremony for the project was held November 7.

"It will be the same size as Dolores Park," noted Boland, a gay man who used to live nearby the city park on Liberty Hill.

In recognition of his myriad accomplishments for the National Park Service, Boland will receive the prestigious designation of Fellow of the American Society of Landscape Architects Friday, November 15, at its annual conference being held in San Diego. He is one of 22 members of the society being elevated to its Council of Fellows and was singled out for exemplifying "the best of landscape architecture."

Former Presidio Trust board member John Reynolds nominated Boland for the fellowship, having witnessed his accomplishments firsthand not only as a trustee but also when he served as the director of the Pacific West Region for the National Park Service from 1997 until 2002.

Reached at his home in Virginia, Reynolds praised Boland as "a visionary who more than anybody else drove the altruistic and practical vision for what the Presidio could be in the future." In addition, "project by project by project," Boland's "influence is again the driving conceptual force behind the degree of excellence which it has all taken place," noted Reynolds.

Award a surprise
Over a glass of iced tea at a cafe with outdoor seating next to the Tunnel Tops site, Boland spoke to the Bay Area Reporter about his career with the Park Service and being honored by his professional peers. The award came as a surprise to Boland, who grew up in the East Bay.

"Being a fellow is an acknowledgment that you are being respected for your contributions to the profession of landscape architecture," said Boland. "For me, it is a huge honor. I am really touched by it."

It is particularly rewarding to be honored by his professional association, added Boland, at a time when government service is more likely to be discounted rather than heralded.

"A lot of the good work done by government landscape architects goes unrecognized within the profession," said Boland, who graduated with honors from UC Berkeley in 1985 with an architecture degree.

Three years later he was a founder of the Lesbian & Gay Graduate Student Association at the state university, where Boland earned master's degrees in landscape architecture and city and regional planning in 1991. Having two gay uncles, one of whom died early on in the AIDS epidemic, he volunteered his expertise to the group that pushed to establish the AIDS grove and selected the city-owned site where to build it.

"I love it, it is so beautiful," he said of the grove, which at first "was a mess, overgrown and really derelict." It now serves not only as a gathering place for the families, loved ones and friends of those lost to AIDS, Boland noted, but also as an example of how "nature can serve a community."

At the time he was working as the director of park projects for the Golden Gate National Parks Conservancy, a job he held until 1998. He left to open his eponymously named Boland Design firm.

But even then he continued to work on national parks projects, including a plan to revive Mountain Lake in the Presidio. After three years on his own, Boland went to work for the Presidio Trust and had a hand in rebuilding its Rob Hill Campground where he overnighted as a Boy Scout.

From an early age he was drawn to working with the soil.

"Some of my earliest memories are gardening with my mom," recalled Boland, adding that he was "an unathletic, artistic kid" who found solace in the outdoors.

"When I was bullied and teased I went out into the woods," he said. "I fell in love with nature, with wildlife and with birds. Anybody can be in nature and feel better."

That truism has been a guiding principle throughout his professional career. Boland is particularly focused on how the various park projects he works on can help attract urban youth to experience the natural worlds a short bus ride from their homes.

"I wanted to dedicate my life to bringing that experience to people who live in urban settings," said Boland, pointing out the various features built into the Tunnel Tops project specifically for youth. "It is not just about transforming a place but finding new ways to connect young people to the Presidio to develop a connection with nature, get into the outdoors, get healthy and fit, and hopefully spend their life going to national parks."

When he and his husband, Rick Fazio, who works as a loan underwriter at Chase Bank, decided to have a child, they left San Francisco for Berkeley and bought the Victorian Boland's grandfather had owned from his uncle. It is next door to where Boland was born. Their son, Kyle, is now 21 and attends the University of Washington.

As for Boland, he has no plans to retire anytime soon. He has yet to finish a number of revitalization projects in the Presidio that will undo the damage to the natural environs wrought by the military.

"When I come to work each day I see all the things I still want to do," he said.