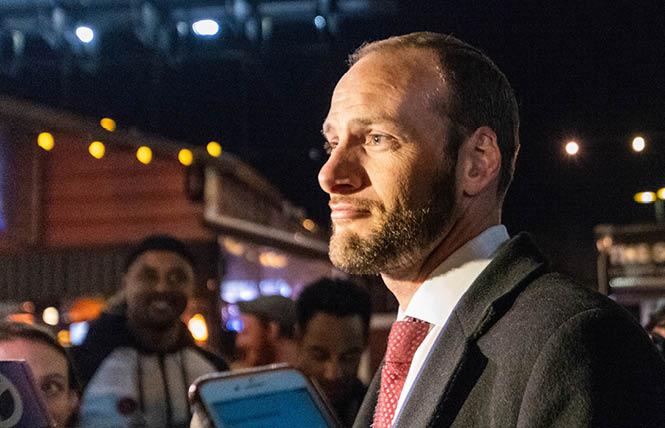 The twin victories of progressives Chesa Boudin and Dean Preston for San Francisco district attorney and District 5 supervisor, respectively, have sent a jolt through the political establishment and foreshadowed possible problems for Mayor London Breed and her agenda.

Boudin defeated interim District Attorney Suzy Loftus by a margin of 2,831 votes, 50.9%-49.1%, in the latest round of ranked-choice voting, according to unofficial results from the Department of Elections posted Tuesday, November 12.

In the District 5 race, Preston defeated Supervisor Vallie Brown by a margin of 187 votes, 50.4%-49.6%, in the latest round of ranked-choice voting.

Loftus conceded the race to Boudin, saying in a statement Saturday that she would "work to ensure a smooth and immediate transition."

"I didn't win the race — but we won the support of so many San Franciscans who are demanding that our city work more effectively together to build safety," she said. "Congratulations to Chesa Boudin."

Boudin, a deputy public defender, is the son of two left-wing militants who were sent to federal prison for their role in a 1981 robbery that left three people dead. He used his personal story in the race to highlight the need for reform in the criminal justice system, and touted the endorsements of Senator and Democratic presidential candidate Senator Bernie Sanders (I-Vermont) and civil rights activist Shaun King.

In an email to the B.A.R. late Monday, Boudin wrote he will be focused on equity as the district attorney.

"My administration will focus on ensuring victims have a voice in every case, reducing recidivism rates by treating the root causes of crime, ending the racial disparities that are rampant in the system, and seeking equal justice for all, regardless of wealth, employment, race, gender, sexual orientation, and citizenship," Boudin wrote.

"The residents of San Francisco have made it clear they want transformational change from an independent district attorney, and rejected calls to go back to the tough-on-crime era that did not make us safer and destroyed the lives of thousands of San Franciscans," he added.

Leading up to Election Day, Boudin was attacked by the San Francisco Police Officers Association as "the #1 choice of criminals and gang members." The POA spent over $600,000 opposing Boudin's candidacy.

Its opposition was returned in kind by District 1 Supervisor Sandra Fewer — who led a "Fuck the POA" chant at Boudin's election night party last week. Fewer's married to a retired cop.

Loftus, a former police commission president and prosecutor, was endorsed by Breed, much of the city's Democratic establishment, and Democratic presidential candidate Senator Kamala Harris (D-California), who used to be San Francisco's district attorney herself.

The election had been the first race for district attorney without an incumbent running in over a century. The dynamics of the race changed, however when DA George Gascón suddenly announced his resignation October 3. Gascón moved to Southern California and entered the race for Los Angeles district attorney October 28.

Breed said that Loftus would be the interim district attorney from the time of Gascón's resignation in mid-October through the end of his term in January — a move that elicited so much protest that the initial public announcement of the appointment on October 4 had to be moved from Portsmouth Square to the dining hall of a nearby dim sum restaurant.

Boudin had told the B.A.R. late Monday that "we will be announcing the date of my swearing in soon."

"We are in conversations with both the DA-elect Boudin and interim DA Loftus about next steps and timing so we can ensure a smooth transition," a mayoral spokesman wrote in an email Monday.

[On Wednesday, the mayor announced that Loftus will serve out Gascon's term, which ends January 8. She said in a statement that it was at the request of Boudin and that Loftus agreed.]

Boudin saw the mayoral appointment as a turning point in the race.

"The mayor tried to throw her weight into this race," Boudin said in an October 14 debate that the B.A.R. previously reported on. "She said something really telling when she appointed Suzy. She said 'I need a district attorney I can work with.' The voters want and deserve a district attorney that they trust, that works for them."

When asked if the police department would be able to work with Boudin as district attorney, San Francisco Police Department spokesman David Stevenson issued a one-sentence statement.

"We look forward to continuing our work with the district attorney's office to address our city's public safety challenges," he said.

David Campos, a gay man who is the chair of the San Francisco Democratic Party, expressed enthusiasm over the results Monday. Campos personally supported Boudin and Preston, although the Democratic County Central Committee that he leads voted to solely endorse Loftus and Brown.

Campos said that although the party's endorsed candidates were defeated, the fact that both the race and the endorsement vote were close shows that the DCCC is representative of city Democrats.

"I think it's a great outcome for the city, speaking as a San Franciscan and as a progressive," Campos, a former supervisor, said. "The fact that you have these results shows that money isn't everything in San Francisco politics and there is a push for change. We just elected the most progressive DA in the country."

Starchild, a pansexual Libertarian activist who goes by one name and who ran for supervisor and school board in the past, said the DA match was a "critical race."

"I spent a lot of time volunteering for Chesa making phone calls," Starchild said. "I am hopeful for criminal justice reform, which is sorely lacking here and in many other places."

Kevin Bard, president of the Harvey Milk LGBTQ Democratic Club, said his organization "must be doing something right."

"The Harvey Milk club is very pleased with the election of Dean Preston and Chesa Boudin," Bard wrote in an emailed statement to the B.A.R. late Monday. "We began our outreach efforts at the Castro Street Fair and didn't let up until Election Day. Our voter guides and our overall message resonated in District 8, District 5, and all over the city."

Debbie Mesloh, a spokeswoman with the Loftus campaign, said that Loftus wants to make the transition as smooth as possible. She said she's not sure what Loftus is going to do next.

"A lot of people are hoping she will continue to serve in some capacity — she always has," Mesloh said.

When asked about the effect of the appointment on the race, Mesloh said Gascón's departure was inopportune.

"George Gascón stepped aside at a difficult time for the city. He didn't have to leave until December 5 (to establish L.A. residency)," she said. "We were three weeks before the election. When Suzy was called to serve, Suzy served.

"Would it have been different if Gascón had stayed? It probably would have been better for the city," Mesloh said. 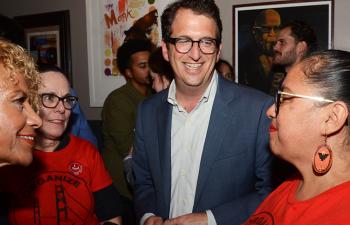 District 5 race
Campos said he was excited about Preston's potential on the Board of Supervisors. Preston has been a longtime tenants rights activist.

"With respect to Dean Preston, he has always pushed for independence — he's with the mayor where there is common ground but he isn't afraid to say when the mayor is wrong," Campos said. "You're going to see a push for more outside-the-box, bold action."

With Preston's victory, the board has increased its progressive majority to nine members.

Preston, a democratic socialist, ran for the Board of Supervisors once before — against Breed in 2016, two years before she was first elected mayor. He lost by only 1,784 votes.

Brown was appointed District 5 supervisor by Breed after the latter became mayor. Breed herself easily won a full four-year term last week with over 70% of the vote.

Gay District 8 Supervisor Rafael Mandelman congratulated Boudin and Preston on their campaigns in a Monday statement to the B.A.R. He had been a supporter of Preston but also of Loftus.

"Analysts will be unpacking the results for weeks and months to come, but one thing is clear to me: San Franciscans are palpably frustrated with the status quo," Mandelman said. "Those of us in city government ignore that anger at our peril.

"We must quickly move beyond the ideology and acrimony to clean up our streets, care for the sickest, and prove this city is actually governable," he added.

"Today is a victory for all San Franciscans seeking bolder answers for the challenges our city faces," he said. "This was a hard-fought election and I am so grateful for the long hours of volunteer effort and grassroots, community support that brought our campaign across the finish line. But now the campaign is over, and I am ready and eager to begin serving our city as soon as possible.

"I commend Vallie Brown on her years of service to our district and look forward to working with her and her staff on a rapid transition that serves the residents of District 5," he added.

Gina Simi, a lesbian who is the co-chair of the Alice B. Toklas LGBT Democratic Club that endorsed Loftus and Brown, congratulated Boudin and Preston and said, "We look forward to working with them."

"Alice continues to be a club that chooses not to support candidates based on party affiliation but on whom will best advance our values for San Francisco," she said. "We continue to face extraordinary challenges, and it is our position that we as a Club and as a city must work together to find common ground if we are to be successful."

Gay former District 8 supervisor, assemblyman and state senator Mark Leno — who ran against Breed for mayor last year — said in a phone call with the B.A.R. early Tuesday that the election results reflected a desire for change.

"It's too easy to read too much into election results," said Leno, who endorsed Boudin after Breed named Loftus interim DA. "But the voters of D5 apparently are looking for a change in the status quo, as I think a lot of people are in San Francisco, and that's reflected in Chesa's victory."

Brown and the POA did not respond to requests for comment as of press time.

Updated 11/13/19: This article has been updated to include info about Boudin taking office in January.