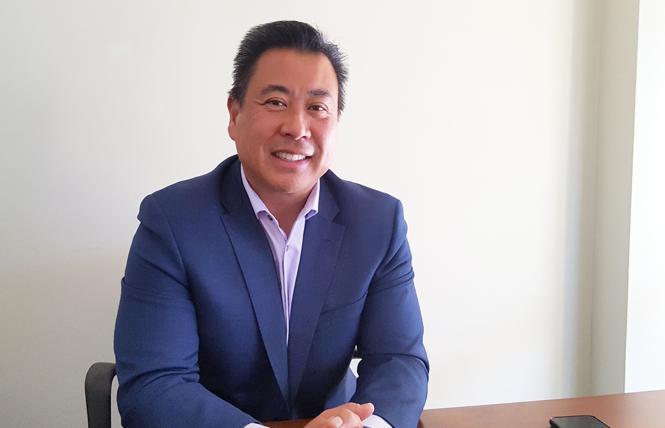 In being elected San Francisco's next sheriff Tuesday, Paul Miyamoto will make history in January when he takes his oath of office to become the first Asian American sheriff in California.

Miyamoto, 52, ran unopposed on the November 5 ballot to succeed Sheriff Vicki Hennessy, who opted not to seek re-election. He received 84,571 votes, or 99.52%, as of press time, according to unofficial returns posted Wednesday from the Department of Elections.

"It's great to have instantaneous results," he said as he walked into the election night party for district attorney candidate Suzy Loftus, who was in a tight race.

The San Francisco Sheriff's Department is responsible for jails, security at the courts and City Hall, and its purview recently expanded to also include some health care facilities.

Miyamoto is currently the chief deputy sheriff. In an interview with the Bay Area Reporter November 1, he said the department has grown in other ways, too, beginning with a vision established during the tenure of former longtime Sheriff Michael Hennessey, who first brought Miyamoto into the department 23 years ago.

"One of the reasons why I joined this department and continue to serve in this department is because of what he saw as our role in the criminal justice system," Miyamoto said. "Not just being jailers, not just being people who turn keys and just kind of walking in a uniform, but actually being change agents in respect to providing services and help into jails, interacting with people in a more human, humane, compassionate way."

Miyamoto cited County Jail 5, which is located in San Bruno, as an example of the more rehabilitative environment that the department hopes to bring to other facilities. County Jail 5 includes a garden that grew into a program that helps inmates, including youth, learn how to grow food, among other skills.

"It's a great program because it's a great way to get kids involved in something that's not just sitting in front of a computer or doing something that's more urban based," Miyamoto said. "It's something where we provided produce to farmer's markets, we used to get pumpkins during Halloween."

Trans policy
Under outgoing Sheriff Hennessy, last year the sheriff's department implemented a new policy of housing transgender inmates by their gender identity rather than their sex assigned at birth — making San Francisco one of the first jurisdictions in the country to implement such a program. The policy was first proposed by former Sheriff Ross Mirkarimi but Hennessy implemented it after she won election four years ago.

"I was a captain at the seventh floor and we were able to move our trans population we had up there to County Jail 2 to make sure that everyone was better housed in an area where they provided services that were more consistent with their community," Miyamoto said, adding that the County Jail 2 houses cis and trans women. "Our trans women are with women in the women's housing areas. Trans men are with men in the male housing areas."

In a phone interview Tuesday, Hennessy said that Miyamoto supported her on the policy change, and that she expects he will continue to work on what she said was "one of the hardest parts of this job — balancing criminal justice and social justice in a way that makes sense."

"I've known Paul for many years since he started in the department," Hennessy, who rose up through the ranks herself, said. "Paul is intelligent, calm, he's thoughtful and he's professional and that's what we need in a sheriff. He's willing to listen, has served everywhere in the department, and I know he will continue to build on what I've done and what my predecessors have done."

Tony Montoya, a gay man who is the president of the San Francisco Police Officers Association, said that he got to know Miyamoto better earlier this year during the endorsement process and likes his ideas for the sheriff's department.

Montoya likes the sheriff's department taking on more responsibilities, such as hospital watches, which he says will help free San Francisco Police Department officers to do other things.

"We have the same ideas about where to transfer certain duties," Montoya said. "He's a very personable guy. In years past there was kind of an us versus them between the deputies and the police department. Paul is willing to listen."

In the interview, Miyamoto also touched upon the planned changes to the Hall of Justice, the 850 Bryant Street location that houses the city's courts and two jails. (The district attorney's office used to be there as well, but recently relocated to 350 Rhode Island Street.)

Mayor London Breed announced last month that the Hall of Justice would be closed by 2021 to make way for a justice campus that would also have facilities to house the district attorney's office, the public defender's office, and the sheriff's department.

"There'd be a component there with a residential treatment facility, a mental health facility — they don't want to call it jail beds but since I'm the sheriff I feel fine calling it jail beds," Miyamoto said. "That is contemplated to be a build-up completed in 2030, so our challenge now is whatever happens when we move out we have to have something in place right now."

Miyamoto said he doesn't want to move inmates out of San Francisco in the interim.

"The last thing we want to do is move them out of county," Miyamoto said. "It doesn't help us at all in terms of what our philosophies are, trying to keep people connected to the community."

Miyamoto said that the department is continuing to become more representative of the communities that it serves.

"One thing I'm very happy with is that our department is extremely diverse. Some of our numbers from just June of this year — we're at about 72% people of color in our department, which is wonderful" Miyamoto said. "I see that as a strength for us to be reflective of the community. However, some of the segments of that diversity can stand to be increased in our staffing.

That said, Miyamoto said he'd like to see the gender gap at the sheriff's department narrowed — the staff is only 14% women, he said.

Miyamoto has experience with miscarriages of justice that can come about for minority groups in his own family's history — his father, along with the rest of the Japanese American side of his family, was interned during World War II.

"I live in our family home and the dry cleaners is actually still around there. My uncle just recently sold the building," he added.

Miyamoto lives with his wife and his five children in the Laurel Heights neighborhood.