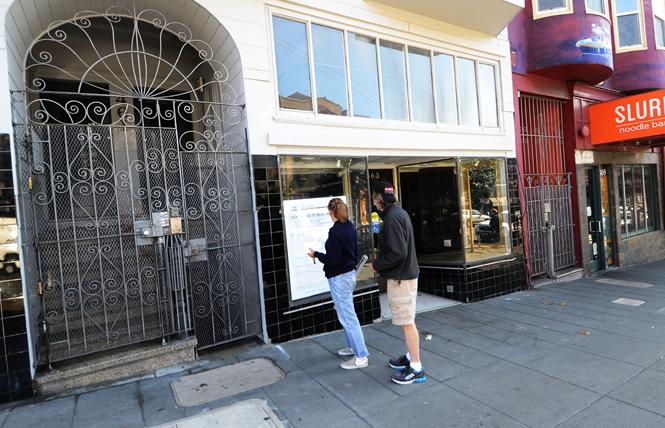 The San Francisco Planning Commission did not have enough votes to review a planned falafel restaurant at 463 Castro Street. Photo: Rick Gerharter

The San Francisco Planning Commission last week declined to take a discretionary review of a building permit for a proposed Castro falafel eatery.

The vote was 3-1 in favor of the discretionary review, but it needed a unanimous vote of the commissioners present so it failed.

As the Bay Area Reporter previously (https://www.ebar.com/news/news//282850) reported, the owner of Gyro Xpress at 499 Castro Street filed a request for discretionary review by the commission to prevent Flying Falafel from opening at 463 Castro Street.

Pashut, who identifies as pansexual, said that he is not sure about the timeline of opening at that location and that it may be occupied in the interim by another business. He needs to obtain permits.

Commissioner Dennis Richards, who lives nearby in the Duboce Triangle neighborhood, voted to take the discretionary review because he would prefer to see the eatery move into one of the currently vacant restaurant spaces in the Castro rather than take over a retail space. He took Pashut on a tour of the area and pointed out several spaces he could lease instead.

When he was "a young gay boy from San Jose," Richards recalled shopping at the Castro's then numerous retail spaces. Today, he noted, the nature of the neighborhood is changing just as it did years ago in North Beach, which has seen retail spaces go empty while restaurants and bars boom.

"We've become a retail desert and the neighborhood is in a death spiral," said Richards, adding that in the right location "I think Flying Falafel can help us get out of the death spiral."

Editor's note: This is an updated story from last week.