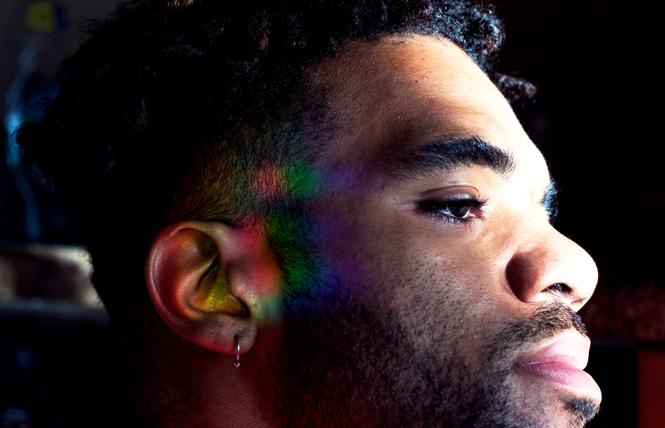 Two authors, Robbie Corey-Boulet and Mikael Owunna, are seeking to change Western perspectives of LGBT Africans with their respective books, "Love Falls on Us: A Story of American Ideas and African LGBT Lives" and "Limitless Africans: Photographs and Interviews."

Their goals are to present a broader contemporary view of Africa and queer life on the continent.

"Love Falls on Us" was published in August.

As the Bay Area Reporter noted last week, "Limitless Africans" will be released October 10 at a launch event with a presentation by Owunna at the Museum of African Diaspora in San Francisco.

At the book launch, Owunna will speak about queer African history, starting with the symbol on the cover of his book that uses a pre-colonial southeastern Nigerian writing system to depict two women embracing.

"Limitless Africans" fits into MOAD's current exhibit, "Africa State of Mind," which currently features the works of 15 photographers from across the continent challenging the stereotype of what it is to be African, said Elizabeth Gessel, the museum's director of public programs.

"It's an educational program, as well as a program about beautiful art," said Gessel, a 51-year old ally who was struck by the "absolute beauty" of Owunna's photos.

American journalist Corey-Boulet, 33, arrived in Nairobi, Kenya about two months after Ugandan gay activist David Kato was murdered in January 2011. He noted the nature of news is that stories only develop when crises happen: an LGBT activist is arrested or murdered, or an anti-gay bill is passed into law.

Corey-Boulet is currently based in Ethiopia, working as the Ethiopia/African Union correspondent for Agence France-Presse. He is also former senior editor of World Politics Review. He declined to speak about his personal life.

He said that he began to also observe a "disconnect" between the international media frenzy and the stories that ran about Africa's LGBT community, actions by well-meaning Western activists and organizations, and what he was witnessing on the ground in Kenya, Liberia, Cameroon, and other African countries.

"I was very interested in the disconnect between what I was seeing in the international press and what I was seeing just by virtue of living in [Nairobi]," he said in a WhatsApp call from Ethiopia with the B.A.R.

The headlines that crossed his computer and the stories he was gathering during his seven-year journey writing "Love Falls on Us" were complex and dynamic, with extremely violent homophobia on one end of the pendulum and vibrant gay life on the other end.

Interest in LGBT Africans' lives increased in the past decade when the continent became the battleground for LGBT rights. American evangelicals proselytized in Uganda, Rwanda, and other countries, stirring up unspoken homophobia in communities that silently accommodated gay relationships. They encouraged governments to pass anti-gay laws. The right-wing activists' work was in stark contrast to the United States' global pro-LGBT campaign and push to decriminalize homosexuality globally, which was launched in 2011 by then-President Barack Obama's administration and backed by the United Nations.

The intensity of the backlash following Obama's push for LGBT rights around the world and then-Secretary of State Hilary Clinton's rallying cry at the U.N., "Gay rights are human rights, and human rights are gay rights," was "very violent," both verbally and physically, particularly in Liberia, said Corey-Boulet.

"I expected this issue to be an issue of public interest wherever I go, but I was not expecting the intensity of the debate that I encountered in Liberia and some of the hostility of the rhetoric," he said.

Until the U.S.'s global LGBT campaign, African gay activists working mostly on HIV/AIDS operated "pretty much under the radar," he said. Then they "found themselves exposed in new ways."

Double exposure
Owunna, a 29-year-old gay Nigerian and Swedish man who was raised in Pittsburgh, Pennsylvania, felt exposed in a very different way.

"I grew up feeling a lot of tension between my LGBT identity and my African identity," he told the B.A.R. in a phone interview. "I felt like I couldn't be both African [and] gay or queer."

Owunna came out when he was 15 years old on the social media site MySpace on National Coming Out Day in 2005. Soon after, he said that he was outed to his family, who repeatedly told him that being gay was "unAfrican."

During a family trip to Nigeria three years after he came out, he was subjected to three different exorcisms in an attempt to "cure" him of being gay.

"At the time, as the priest was praying over me and doing all of these different things, I was thinking, I was like, 'OK God, if I'm not meant to be gay, please just take this from me because this is just too painful and traumatic. Just take this away from me. I can't do this,'" Owunna said.

Feeling isolated and alone, he fell into a deep depression. He returned to college after his visit to Nigeria. He also picked up a camera for the first time.

"I found photography as my voice in the darkness, if you will," he said. "Photography became, for me, a space of healing and transformation."

After college, Owunna traveled to Taiwan to work with indigenous youth, teaching them how to photograph their experiences, for a year as a Fulbright Scholar. Upon completion of his fellowship, Owunna found himself back at his family's home in Pittsburgh.

"I was being jettisoned to all of those experiences of trauma that was connected to my family and my identity," he said.

"I literally walked up the stairs and turned around a corner and there was this wall filled with 50 portraits of LGBTQ South Africans," he said, admitting he didn't know anything about the exhibit or Muholi at the time.

"My whole life I had never seen an image of an LGBT African person," he said. "It was really at a crucial turning point for me in my life."

Muholi's work inspired him to explore his own experience as a queer African in the diaspora. It set him on a six-year journey documenting and photographing the queer African immigrant experience in North America, Europe, and the Caribbean.

"Our agency has been denied the same way in which our humanity has been denied," said Owunna about how African LGBT people have been stripped of their own culture through colonialism and racism.

I am Africa
Through their respective books the men are creating an alternative narrative for the queer African experience.

Both authors delve deep into the diversity and the realities of LGBT Africans on the continent and around the world through easily relatable narratives utilizing African queer history, personal stories of African gay activists and average people, and in Owunna's case, stunning images.

Owunna hopes his book will "debunk this myth that it's unAfrican to be LGBTQ" by integrating contemporary images and personal narratives with pre-colonial queer African history.

Corey-Boulet does something similar in "Love Falls on Us," weaving historical evidence with the experiences of three African LGBT activists and everyday gay people in Cameroon, Ivory Coast, and Liberia.

"I wanted to show that their lives are very much the lives that are people who are from these places and who are shaped by political and economic history," Corey-Boulet said. "There is no way that you can say with any seriousness that they are not from this region. This is their home."

He also hopes readers will understand that despite the headlines, LGBT Africans "are not in a state of helplessness and constant despair."

"It's not all doom and gloom," he said. "To the contrary, many are participating in very vibrant local gay scenes and lead very full lives," and they "are in a position to effectively advocate on their own behalf."

The anti-gay backlash during the past decade was real, however. Corey-Boulet also witnessed how gay activists in Liberia and other countries on the continent progressed.

"If I were to say the book has a success story, it would be the Liberian story," he said. "The way that after this initial backlash peaked and then subsided, activists very savvily regrouped and learned to take advantage of some of the new resources that were being made available."

The book launch of "Limitless Africans" with Owunna is Thursday, October 10, from 6:30 to 8:30 p.m. at MOAD, 685 Mission Street, in San Francisco. The event is free and open to the public. To RSVP, visit https://bit.ly/2pXgOhU

For more information about the books, visit http://www.zedbooks.net/shop/book/love-falls-on-us/ and http://fotoevidence.com/book/40/hard-copy

As reported in last week's column, de Belaunde served in Congress until Peruvian President Martin Vizcarra dissolved Parliament in late September. As one of two out congressman in the country, he introduced a marriage equality bill and a bill to allow individuals to change their gender on legal documents. A Victory Institute news release pointed out that he also worked to overhaul the criminal justice system and legalize medical marijuana.

The institute announced that the other co-recipient of the award is lesbian North Carolina state Representative Deb Butler. She is the Democratic whip of the North Carolina House and became one of two out LGBTQ people in the state Legislature when first appointed in 2017. She was elected a year later.

The Baldwin award is named after the lesbian U.S. senator from Wisconsin. A Democrat, Baldwin made history in 2012 when she became the first openly LGBTQ person elected to the Senate. She was easily re-elected in 2018.

The Victory Institute is expected to present the awards at its International LGBTQ Leaders Conference in Washington, D.C. in November.