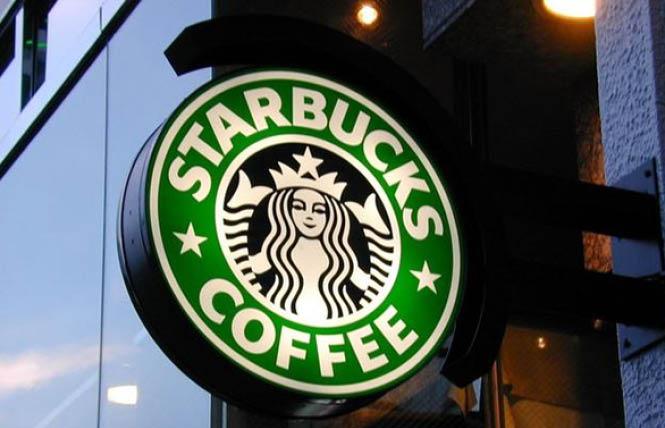 Starbucks does not advertise in many LGBT print publications. Photo: Marco Paköeningrat via Creative Commons)

(Editor's note: This article, which first appeared in the Washington Blade, was produced in partnership with the National LGBT Media Association, of which the Bay Area Reporter is a member.)

Many are happy to stand in line for what they serve at Starbucks — but the global coffee conglomerate has left LGBT media standing at the altar, rebuffing repeated proposals to court a demographic of discerning tastemakers who would, seemingly, make for a marriage made in marketing heaven.

"It's surprising to me that Starbucks wouldn't target ads to our community," said Todd Evans, president and CEO of Rivendell Media, which places advertisements for the National LGBT Media Association. Together, the association's members — including Boston's Bay Windows and the Washington and Los Angeles Blades — reach an estimated 500,000 weekly print and online readers.

Evans, who had just returned from a Starbucks run when the Blade spoke with him, said numerous deep dives searching LGBT media for the company's ubiquitous mermaid logo left Rivendell treading water in a sea of unproductive efforts.

"We monitor all LGBT newspapers and websites to see who's out there, advertising," said Evans of his sales team, "and they've not come across our radar as doing any outreach. Like Apple, the thing I would most want to say to them is, with a company with a presence in every major urban center, they have to know the LGBT market is a big part of their clientele."

Evans said Rivendell has been reaching out to Starbucks "for years," through its various advertising agencies (currently Spark Foundry). "And the answer was always, 'Starbucks doesn't do print.' Now they do. I see their ads all the time, in the New York Times and Martha Stewart Living magazine, so we know they're predisposed to having creative [print-centric material at the ready]. That's all the more reason for Starbucks to be more precise in their marketing. We will definitely be reaching out again shortly."

Also making the case for direct marketing is Michael Yamashita. The president and CEO of BAR Media Inc., Yamashita is publisher of San Francisco's Bay Area Reporter, a member of the National LGBT Media Association.

"It's as close as you can get to speaking directly to the LGBT consumers, and the decision makers in the community," said Yamashita, of advertising in print and online, via LGBT-focused outlets.

B.A.R. reader surveys, he noted, consistently show LGBT readership is "interested to know which corporations support them," and more inclined to give those corporations their business.

"There are several Starbucks locations in the gay [Castro] neighborhood here," said Yamashita. "They've been a mainstay for years. Our sales manager, he's pretty aggressive about trying to get local corporations to advertise with us, but we've never seen any advertising from them."

That absence is not just felt locally, said B.A.R. vice president of advertising Scott Wazlowski. "I've been here since 2010, and, to the best of my knowledge, they've never done any print or online advertising in our publication — and beyond that, I don't think I've seen them in any LGBT publication."

Although Rivendell handles national sales, Wazlowski did reach out to Starbucks locally, and was "told by the store manager the only thing they could do to show any support would be to provide product" at Pride or other notable LGBT events. Starbucks, he notes, "brings coffee and pastries for each of the monthly membership meetings of the Castro Merchants."

A tasty treat perhaps, but of no help to the bottom line.

"We didn't want that," said Wazlowski. "We wanted an ad in the paper. Advertising in a local or regional publication says, 'We care about you, and we care about the news that affects your community.' Anecdotally, advertisers who do that seem to do better, in terms of having an impression among our readers."

Wazlowski cites San Francisco Federal Credit Union as a success story of how local engagement pays dividends. A winner of its reader's choice award for best bank or credit union, they never, Wazlowski recalls, "showed up on the radar until they placed ads with us. They skyrocketed in the ratings, and have held that position ever since."

Wazlowski attributed this ascension to advertising "at least once, monthly, or in special editions" as well as, in past years, having a booth at the Castro Street Fair. "That multi-pronged appeal to the LGBT community," he said, "has proved very successful."

Much more successful, said Yamashita, than gestures perceived as merely symbolic, or downright opportunistic. "It's a frequent criticism," he noted, "to see a lot of these corporations participate in our Pride parades and events in the month of June. But they are nowhere to be seen before or after. People do see that concentrated presence in June as a token recognition. That's pretty much the heart of the matter right there."

Echoes of token recognition reverberated through two weeks of email communication, when the Blade's request for an interview with a Starbucks representative was answered by a Seattle-based member of global communications firm Edelman.

Replying on the day of this reporter's deadline to repeated requests to answer a series of questions sent via email, Jonathan J. Cruz, account executive, Starbucks Corporate & Crisis Communications, wrote, "Apologies for the delay as we worked on gathering details for you. Unfortunately, we are unable to facilitate your request for an interview, but we're happy to share more details on how Starbucks supports and advocates on behalf of the LBGTQ+ community."

Starbucks' "long-standing commitment to creating an environment of belonging and inclusion" was one such example. Ally status was further claimed, when Cruz noted U.S. and Canadian customers were privy to "limited edition rainbow Pride cups, and our in-store partners (employees) had the option to wear Pride T-shirts." He also noted the raising of a Pride flag at Starbucks' Seattle headquarters ("for the sixth year in a row"), and a June 2019 partnership with the Born This Way Foundation, in which the Starbucks Foundation engaged in "matching donations to the BTW Foundation up to $250,000 which will be used to increase access to mental health resources and support organizations that empower the LGBTQ+ community and young people across the country."

Bringing a perspective from the town where Starbucks started, Seattle Gay News editor George Bakan said of their local presence, "They spend a lot of money at Pride, they sponsor community events, and they have a scholarship fund. There's lots of ways you can help a community besides advertising in the gay press, as much as I hate to say that. I'd love to get a big check from Starbucks every month, to help my business. But I'm much more concerned with their equitable hiring, and welcoming everybody as a customer. A gay couple holding hands will not elicit a smirk or a comment from somebody behind the counter at Starbucks. ... It's one thing to talk about equality. It's another thing to act upon it."

In the realm of LGBT engagement, Starbucks should act now, said Evans. "Like Apple, they're not the only game in town anymore. Pretty much everyone makes a latte today. Why not capitalize on their already loyal following?"

Controversy
But Starbucks is hardly immune from controversy. In May 2018, the company shuttered thousands of its U.S. stores for a training session, after the April arrest of two black men at a Philadelphia location. A photo from a May 29, 2018 NPR article showed a sign on a Starbucks cafe in Portland, Maine, noting the shutdown's purpose was to "reconnect with our mission and share ideas about how to make Starbucks even more welcoming."

In 2015, a gay D.C. man filed a discrimination complaint claiming the manager of a Dupont Circle Starbucks called him anti-gay slurs and assaulted him. "You are fucking with the wrong one and I will break your neck you little fag, and I will break your spic boyfriend's neck as well," the complaint quoted the store manager as saying to the gay couple.

Evans also noted an annual kerfuffle that began in 2015, when Starbucks introduced a red cup for the holidays, instead of a Christmas-oriented one.

"I literally heard about that while I was in line at a Starbucks store, looking at one of their Advent calendars," recalled Evans. "It was a really poorly handled public relations thing for Starbucks, because they didn't push back. I thought, 'Oh, what a shame.' LGBT consumers are fiercely loyal ... The idea is to turn your best customers into your advocates — and this is a company, like Apple, that could really do that with just a little specific outreach. I know it would certainly make me feel better about the amount of money I spend there."

Moral support aside, Evans made the case for a presence in LGBT media thusly: "Who are the people reading it? The people who care the most, the people who want to see who is reaching out to them, who want their business. So from a corporate standpoint, they haven't been open to it, but maybe it's time to say, 'We should support our best customers. It is time do this.' "