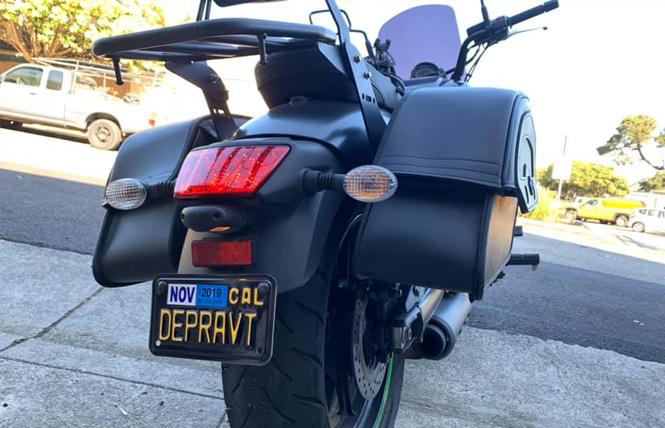 A gay man whose request for a vanity license plate signaling he is a leather daddy was rejected by California's Department of Motor Vehicles has succeeded in a bit of linguistic revenge against the state agency.

Turning the DMV's censorious policies on their head, San Francisco resident Robert Haynes won approval this summer for a vanity license plate that reads "DEPRAVT." It is lifted straight from the rejection letter the DMV had sent him explaining it could not approve a "LTHR DDY" license plate because it can be read "as a term of lust or depravity."

"The more I thought about the word 'depravity' and studied it's origin (from the Latin 'pravus,' meaning perverse) and the way that homosexuals were long called 'perverts' I decided to own the word," Haynes wrote in a Facebook post in mid-August that included a photo of the vanity plate on the back of his 2015 Kawasaki Vulcan motorcycle.

In a bit of irony, however, the DMV had initially refused to approve his request for the "DEPRAVT" plate because it viewed it as a swear word, noted Haynes.

"Well, the DMV rejected that plate as well, stating it was a curse word, EVEN THOUGH THEY USED THE WORD THEMSELF!!!" he wrote in his social media post.

In July, he reached out to the office of gay state Senator Scott Wiener (D-San Francisco) for assistance. And after Wiener's staff made an inquiry with the DMV, Haynes received an email from the lawmaker informing him that the DMV had reconsidered. His new vanity plate arrived in the mail in early August.

Reached in St. Petersburg, Florida this week, Haynes told the Bay Area Reporter that he views the approval of the "DEPRAVT" plate as winning one battle in a longer war against the standards the DMV is using to review vanity license plate requests.

"I feel like I only won a small battle," he said. "I think the very fact this license plate was even a battle shows the level of absurdity."

As the B.A.R. first reported in February, Wiener had sent the DMV a letter in which he castigated the agency for basing its rejection of the "LTHR DDY" license plate on homophobic notions about leather daddies. He had demanded that the DMV approve Haynes' vanity plate request.

Wiener and Webb eventually met in person to discuss the issue, and Wiener told the B.A.R. this week that she came to the meeting with a list of leather-themed vanity license plates that the DMV had approved. But she remained resolute that a "LTHR DDY" plate was not appropriate, Wiener said.

While disappointed in the decision about the "LTHR DDY" plate, Wiener said he was satisfied by Webb's acknowledgement that the language the DMV had used in its rejection letter sent to Haynes "was inappropriate and very outdated."

"I was satisfied they had acted in good faith," said Wiener, adding that his office is "watching and interested to know if other people in the LGBT community have these issues with their vanity plate requests."

Court test
A federal lawsuit may upend how the DMV handles vanity license plate requests. Jonathan Kotler, who teaches at the University of Southern California Annenberg School for Communication and Journalism, is suing the agency over its rejection of his request for a "COYW" vanity plate. It is shorthand for "Come on you whites," which is chanted by fans of the FC Fulham soccer team in London, famous for its white jerseys.

The DMV rejected the plate partly due to the racial connotations of the chant. U.S. District Court Judge George Wu recently rejected the DMV's request to dismiss Kotler's lawsuit. In his opinion, Wu explained, "it strains believability to argue that viewers perceive the government as speaking through personalized vanity plates."

Asked if he would also want to sue the DMV, Haynes told the B.A.R. that he wasn't sure if he has "the energy" to pursue legal recourse. But he did stress that he would still prefer to have a "LTHR DDY" plate on his bike.

"By all means, if any legal professionals would like to help me, I am certainly open to talking to somebody," said Haynes.