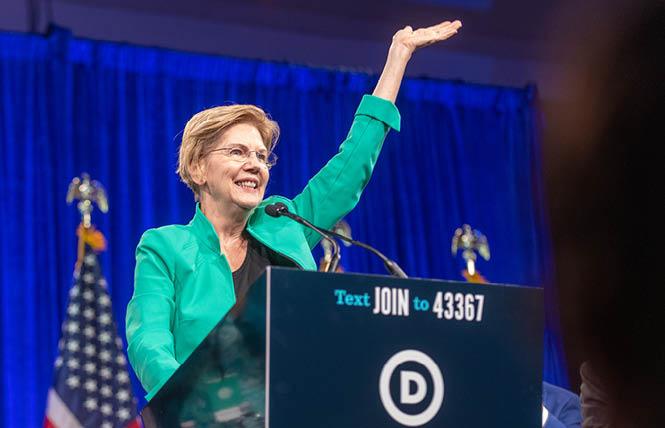 LGBT voters: Mark your calendars. Over the next month, there will be four Democratic presidential candidate forums — two of them devoted exclusively to LGBT issues. And one of those LGBT forums will be the first-ever to be broadcast by a major cable network.

The Human Rights Campaign Foundation is partnering with CNN to host a nationally televised LGBT presidential town hall, October 10, similar to the climate change town hall CNN held September 3. As with the climate change event, the LGBT forum will have each candidate on stage with a CNN moderator for a set period of time to answer questions from the moderator and members of the audience.

Lucas Acosta, HRC's national press secretary, said some details are still being worked out but any candidate who meets the Democratic Party's threshold criteria for participating in the party's debates will be invited to participate in the LGBT forum.

The 2008 HRC presidential forum (held in August 2007) was broadcast live on MTV's newly launched LGBT cable channel Logo. Six of the eight major Democratic candidates at the time participated, but then-senator Biden declined, citing a scheduling conflict. Republicans were invited in 2007, but none agreed to participate.

Acosta said HRC has decided not to invite Republicans this year.

There are three Republican candidates challenging Trump for the 2020 GOP nomination, but polling shows the president garnering between 66% and 85% of support among Republican primary votes. The Republican challengers include former Massachusetts Governor William Weld, former Congressman Joe Walsh of Illinois, and former Congressman and South Carolina governor Mark Sanford.

Adding to the challengers' obstacles, Republican Party organizations in South Carolina, Arizona, Kansas, and Nevada are reportedly considering canceling GOP primaries in those states, according to Politico.com.

Acosta said the HRC-CNN forum in Los Angeles will have a different audience from the September 20 LGBT presidential forum being organized by LGBT media organizations and a local newspaper in Cedar Rapids, Iowa. The Iowa forum is expected to be livestreamed and is being organized by the national LGBT media group GLAAD, the Iowa statewide LGBT group One Iowa, the Advocate magazine, and the Gazette newspaper. That forum will take place September 20.

The two other national Democratic presidential candidate events during the four weeks are both Democratic Party national debates on an as-yet unspecified range of topics.

So far, LGBT issues have not gotten much airtime in the Democratic Party debates, even though one of the top tier candidates is gay. Recent national polls have shown support for Buttigieg slipping, but he is still hanging onto fifth place among the 20 remaining viable candidates and he is still garnering well above the party's 2% polling minimum for qualifying for the debates.

But with the top three Democratic candidates in the double-digits, Buttigieg, Senator Kamala Harris (California), and others will be under pressure to perform well in upcoming debates in order to avoid being written off by political pundits.

Buttigieg has in recent days dramatically escalated his criticism of Trump and his references to his religious beliefs.

During his time onstage at the September 3 CNN climate change town hall, Buttigieg said, "It's a kind of sin" to ignore the harm being done by climate change.

"Every religious and non-religious moral tradition tells us that we have some responsibility of stewardship" of the planet, he said.

On a radio interview show September 6, Buttigieg quoted the Bible as saying "life begins with breath" to argue that, no matter how various people interpret that passage, when it comes to a woman's right to have an abortion, "The most important thing is the person who should be drawing the line is the woman making the decision."

Every time Buttigieg quotes the Bible on the campaign trail, he unleashes a flurry of retorts from conservative media, and that could increase the likelihood of a question regarding religion being posed to him during the national debates. 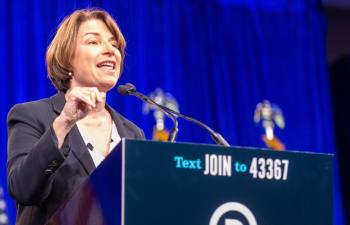 Here's a quick guide on where to watch the upcoming forums.

The debate will be nationally broadcast by ABC and Univision from Texas Southern University in Houston from 5 to 8 p.m. Pacific Time. Viewers can also watch a livestream at one of several sites, including ABCNews.com and Facebook Watch. Four journalists will be moderating: George Stephanopoulos, David Muir, Linsey Davis, and Jorge Ramos.

Friday, September 20: This is the aforementioned LGBT-focused town hall. It will take place starting at 5 p.m. Pacific Time in Cedar Rapids, Iowa, the first state that will register its preference for a Democratic candidate during its caucuses February 3.

As of deadline this week, the confirmed participants include Biden, Booker, Buttigieg, Castro, Harris, Klobuchar, Warren, Congresswoman Tulsi Gabbard (Hawaii), former Congressman Joe Sestak (Pennsylvania), and author Marianne Williamson. A GLAAD news release stated that the organization believes LGBT issues have been "largely absent" from the 2020 presidential campaign so far. According to the Gazette, each candidate will be asked to present a statement regarding LGBT issues and take questions from three moderators: Advocate editor in chief Zach Stafford, Gazette columnist Lyz Lenz, and One Iowa policy director Kennan Crow.

Thursday, October 10: CNN and the HRC Foundation are collaborating to stage a live nationally broadcast town hall for Democratic candidates on LGBT issues, beginning at 5 p.m. Pacific Time. The event, scheduled for the eve of National Coming Out Day, will take place in Los Angeles, and HRC said that it has confirmations from Biden, Buttigieg, Castro, Harris, Klobuchar, and Warren. As the first-ever nationally broadcast LGBT presidential town hall, it will provide the general public with an unprecedented glimpse into the Democratic candidates' positions on LGBT issues. CNN will broadcast and livestream the event live during prime time.

Official estimates of CNN's audience size for the climate change town hall averaged 1.1 million people during the seven-hour event. Viewership was up slightly — to 1.4 million — during the last three hours, between 8 and 11 p.m.