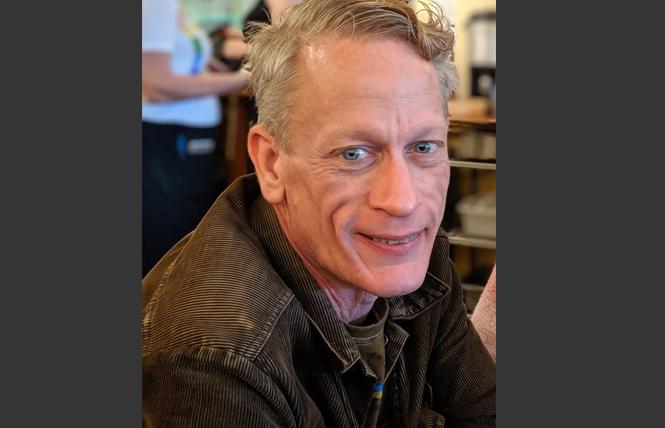 A steering committee formed by Openhouse has selected a gay, HIV-positive man to create what is believed to be the nation's first permanent installation honoring long-term survivors.

David Faulk, a painter, costumer, and performance artist, was chosen to paint a two-story mural in the new Openhouse community center under construction at 75 Laguna Street in San Francisco. He was selected from a field of 24 artists who submitted applications for the commission, according to a news release.

Openhouse is a nonprofit that provides services to LGBT seniors. It has partnered with Mercy Housing to construct two affordable housing projects for seniors, many of whom are LGBT.

Faulk is expected to begin work on the tribute installation in October. Titled "The Scenic Route," the mural on the central staircase of the new Openhouse community center will create a playful visual map that examines and celebrates the different paths and experiences of long-term survivors of HIV.

"The content of 'The Scenic Route' mural depicts a scene of upbeat celebration, as well as an upfront acknowledgment of the accomplishments and roadblocks long-term survivors face in integrating their past with their present," Faulk said in his submission, adding that the mural "depicts personal journeys with a gentle comic eye on the flurry of activity that makes seeking contentment a universal, and unifying, human experience from whatever place you start, on whatever road you take to get there."

Faulk and his longtime partner and collaborator, Michael Johnstone, are the subjects of a 2019 documentary, "Verasphere, A love Story in Costume," about their art, love, and survival. HIV-positive and healthy, the couple created Mrs. Vera, a "drag tornado" costumed and portrayed by Faulk and photographed by Johnstone.

Faulk lived in New York City from 1987-1992, moving there after receiving a bachelor of fine arts degree from Syracuse University in 1985. He moved to San Francisco in 1992 and began using a cartoon character, Little Lulu, as a surrogate protagonist in a series of works addressing the physical and emotional challenge of survival, isolation, nonconformity, and his personal relationship to the AIDS crisis.

Openhouse officials said they were thrilled with Faulk's selection.

"We are delighted to have David as the artist for our tribute mural," Karyn Skultety, Ph.D., Openhouse's executive director, said in the release. "When we started this project, we knew we wanted something unique and quintessentially San Francisco in its appeal to generations of long-term survivors."

Funded primarily by a capital grant of $250,00 from Gilead Sciences Inc., the mural will be open to the public. The steering committee will now turn its attention to planning a dedication ceremony, likely to be held in early 2020.

Howard Grayson elder conference
The aforementioned Openhouse will be the new site for the eighth annual Howard Grayson LGBT Elder Life Conference Saturday, September 14, from 11 a.m. to 3 p.m. at 55 Laguna Street (near Market).

Attendees will also see "A Great Ride," a documentary about older lesbians living the good life, with a panel of queer women to follow.

A youth panel will talk across generations, and entertainment will be provided by comedian Karen Ripley and troubadour Blackberri.

People will also have a chance to win raffle prizes.

Grayson was a black LGBT and labor activist who died in September 2011. He died alone in a hospital, and none of his family or friends was informed. The Milk club started the conference as a tribute to Grayson and to educate LGBTQ elders and their allies.

Join hundreds of progressives, new and experienced, of all backgrounds and ages, for a day of thoughtful, challenging presentations and discussion about 2020's crucial elections.

There will be keynote presentations, panel discussions, and interactive breakouts featuring leaders in electoral politics and issue-based advocacy.

Tickets are $25. To purchase tickets, or for more information, visit https://www.rockthecongress.org/eastbay

On Wednesday, September 25, from 6 to 7:30 p.m., the library will hold a talk on queer Latinx history in the Mission 16th Street corridor. Jesus "Chucha" Barragan will share some of the history and stories of life on 16th Street.

According to the library's newsletter, Barragan moved to the Mission in December 1975 and helped start the Gay Latino Alliance. He has been a part of the gay Latino community of San Francisco since then. Two members of the alliance, Richard Alvarez and Tony Lopez, founded Esta Noche, San Francisco's first gay Latino bar that opened on 16th Street in 1979. It closed several years ago.

On Thursday, September 26, from 3:30 to 4:30 p.m., the library will hold Queer Latinx Storytime. Miss Bix will be leading children in songs and books with an LGBTQIA focus, in Spanish and English. All are welcome.

Both events are free. The library is located at 1 Jose Sarria Court.