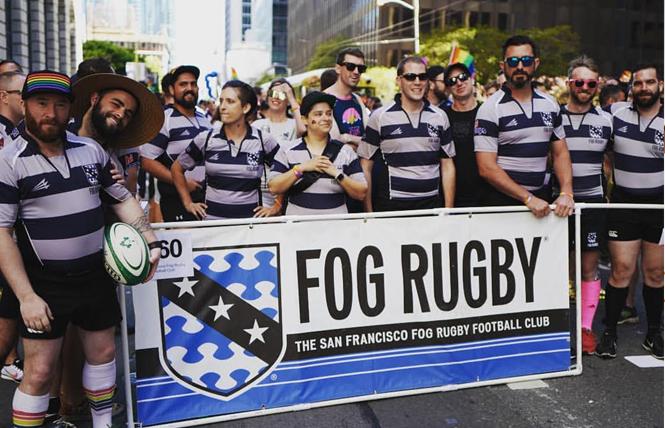 A few years back, Joey Van Matre, an Oklahoma research analyst who had recently relocated to the Bay Area, was in search of a sport to help him open up socially. An acquaintance suggested rugby — in my opinion, the most gregarious and joyous of team sports. It was love at first scrum. As soon as he showed up for his first practice with the San Francisco Fog Rugby Football Club, he knew he'd found a home and a family.

"I had never played on a sports team," Van Matre said. "I was a runner. I really wanted something that was more social than that."

(An aside: From what I recall from the haze of my college days, when I played fullback for Ohio Wesleyan, rugby parties pack about two year's worth of socialization into every get-together, and they have parties after every match, on holidays, and sometimes just because. I told my friends from the wrestling team that rugby was like wrestling, except you get beer and cigarettes.)

The mission of the Fog is to welcome gays, people of color, and other underrepresented groups into the smash-and-grab sport. The spirit, Van Matre said, is personified by Dany Samreth, the coach who succeeded the legendary Kathy Flores to lead the Fog for seven seasons.

"He is very competitive," Van Matre said. "He wants to win, but he is also very inclusive in terms of skill. He's patient and he creates opportunities for players to play. You can learn some things in practice, but you really need to play in matches to get better. My first match I ever went to I was terrified, but he was patient. He thinks for the long term and develops the team to be able to compete at the Bingham Cup."

The Bingham Cup, named after Mark Bingham, a former Fog player and fallen hero from 9/11, is gay rugby's international championship, started in San Francisco and played every two years. The next Bingham Cup will be held August 8-17, 2020 in Ottawa, Canada.

This will be Van Matre's fourth season on the team. Exposure to rugby has indeed helped him open up socially. Last year he was a team captain, and this year he was elected club secretary. Joining him on the board of directors are Rob Flores, president; Jay Bauer, treasurer; Justin Melbourne, fundraising; Tyler Moser, operations; Tom Pierce, recruiting; and Daniel Crowley, marketing and merchandise.

"I am a much more social person now," Van Matre, 29, said. "I'm a data analyst and convince people of things by showing them the data. When I was made captain last year, my job was to convince people in the moment. It made me a more vocal leader. I'm not best friends with everyone on the team, but we all like each other and we all go out together. I like that we can all be so serious in a game, but so non-serious away from the game."

Currently, he said, the club has about 40 players, with a core group of about 30 that can always be counted on for practices. "We don't have a women's side right now," he said, "but we do have several women who practice and play with us. We have people who are 18, 19, 20; and we have people who are retired. So a pretty wide range of ages and experience."

This is the off-season for the Fog, but the team will hold weekly touch rugby games on Thursdays at 8 p.m. starting this week at 1645 Geneva Avenue in San Francisco. Practices will resume in October, and the club will be focusing on recruiting more players and sponsors as they prepare for the Bingham Cup. Starting September 5, the Fog will again offer its annual Pathways to Rugby six-week course for those interested in learning the sport.

Now, rugby is a pretty physical sport, which is much of its appeal but also is enough to make some shy away.

But Van Matre said he does not regret a minute of it.

"I'm from Oklahoma," he said. "Playing sports was not something I really felt was available to me growing up. Playing for the Fog is one of the best things I've experienced living in San Francisco. I'd join again in a heartbeat. I've traveled overseas with the team and we really get to carry on Mark Bingham's legacy. People know us."

For more information on the Fog, visit http://www.fogrugby.com. For questions about Pathways to Rugby or joining the Fog, email recruiting@fogrugby.com.