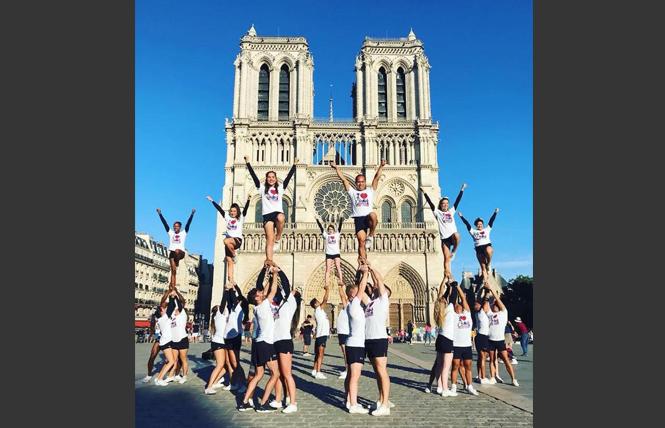 Members of Cheer New York performed in front of Notre Dame ahead of their competition at last year's Gay Games in Paris. Photo: Courtesy Facebook

The reports will be discussed during the annual Federation of Gay Games general assembly at the end of October in Guadalajara, Mexico as preparations progress for the 2022 Gay Games, scheduled for Hong Kong.

In the Gay Games business model, successfully creating such a big constantly moving multi-sports and cultural festival from scratch requires a cooperative working relationship among the host organization, which is quickly assembled to do something it has never quite done before; international mission-focused LGBT sports organizations, which represent tens of thousands of athletes and have spent years creating procedures for the ideal, inclusive sports competitions; and the FGG, the licensing body that brings everyone to the table while securing the future of the event.

The reports show that model was frequently undercut. The vision that Paris organizers had of what the sports should be and how they should be run sometimes clashed with those of the LGBT sports groups and the FGG itself. Some of clashes were predictable; others are head scratchers.

"Of course, the name is militant, but in this day and age, 'Gay Games' does not reflect diversity and inclusion," the public relations report said. "Instead, the name 'Gay Games' connotes exclusion of all who are not 'gay,' which is often interpreted as excluding women, lesbians, bisexuals, transgender people, and the entire non-gay world, including the heterosexual community. Please keep in mind that in most of the world, the word 'gay' means gay men only."

Of course, this is not the first time anyone has taken a shot at the name. It was adopted when organizers of the first Gay Games in 1982 were sued and blocked by the United States Olympic Committee for the use of the word "Olympic" in the name. The words "gay" and "lesbian" are still used in many longtime LGBT+ sports and cultural organizations, such as the European Gay and Lesbian Sports Federation, founded in pre-acronym times when those were the terms used to signal inclusiveness and diversity. So athletes and artists from those organizations know the term refers to inclusion, not exclusion.

The name was also attacked for much of the past decade by critics, including some in the FGG itself, who were focused on getting the FGG to end the Gay Games and stage a unified event with the now-defunct Gay and Lesbian International Sport Association. Their calls to drop the name were soundly rejected by Gay Games stakeholders.

The report concluded by saying Paris 2018 marketed what it labeled the "militant" approach (calling the Gay Games by its name) and a "politically correct" approach (labeling them "A Celebration of Diversity.")

"Experience showed that only the first approach was successful," the report said.

• Paris 2018 complained about the fees that come with some of the sanctioning LGBT sports organizations and said many did a poor job of promoting the event.

"Relationships with most international LGBT federations were very difficult and generally not very collaborative, with the exception of IAGLMA (martial arts), FrontRunners (athletics and running), and GLTA (tennis)," the community relations report said. "Complementary and additional funding requests from associations such as ESSDA, GLTA, IGLFA, etc. caused major issues and required a lot of time. The FGG needs to step up and address this issue NOW and keep at it for the entire planning cycle. The host and the participants should NOT pay for additional requests from sports or cultural federations."

The report was referring to the European Same-Sex Dance Association and the International Gay and Lesbian Football Association.

Such fees, accepted when sports federations sign their agreements with a host, are standard operating procedure when they sanction tournaments to help offset the cost of the benefits they provide to participants and the organization of the meets. Paris should not have been surprised, representatives of sports federations told the Bay Area Reporter.

"Paris should have done more research before wanting to host the games," said Gus Penaranda, president of the IGLFA. "Just because you do not agree with something doesn't mean you understand why it is done. We charge a membership fee to protect our members and to provide them what they need at tournaments and beyond. IGLFA has gained the reputation of providing top certified refs, and our tournaments are well organized and usually issue-free. We work hard to protect the integrity of the game."

"The Gay and Lesbian Tennis Association has 84 sanctioned tennis events around the globe," said Dan Merrithew, CEO and president of GLTA. "All of our tournaments have the same fees assessed for using our software, ranking database, website listings, support, etc. We assessed those same fees to the Paris organization ($4 per player). We did not request any 'complementary or additional fees' as they have reported in their final report."

Merrithew did say that since 2006, when the Montreal World Outgames lost millions of dollars, GLTA has required all multi-sport events such as the Gay Games to pay a 50% deposit up front.

"We have this requirement due to historical non-payment from other multi-sports events: Montreal Outgames filing bankruptcy, Miami Outgames folding without paying, etc.," he said. "But that pre-payment requirement is agreed upon when they request GLTA sanctioning."

Kim Shephard, FGG rep for the International Gay Bowling Organization, said, "We consider that the report is inconsistent with facts and, for the moment, are choosing to engage directly with the Federation of Gay Games and related entities."

• Paris had its own view of what some of the disciplines should be like, occasionally clashing with the vision and mission of the LGBT sports and cultural organizations.

"Cheerleading was out of place at an international event. Cheerleading is too American. To ensure a future for cheerleading, it is essential to remove PCA's monopoly on competition," the Paris 2018 cultural report stated, referring to the Pride Cheerleading Association. "This exclusivity makes any innovation and any evolution impossible. Cheerleading must open up to the world and show a new face that is more in line with reality and less caricatured and in line with the tastes of the public of the organizing country."

Sara Toogood, secretary of PCA, countered, "Cheerleading is truly international — there is nothing 'too American' about it and there hasn't been since 2004 when the recognized world governing body of cheerleading, the International Cheer Union, was first established. Utilizing cheerleading as a vehicle to engender social change and make impactful donations to charities that support health and wellness in our LGBTQ+ community is the most innovative of all."

Toogood also noted ICU has clubs in "116 nations across the world, with 3.5 million athletes on all continents."

As for any monopoly, Toogood said, "It was abundantly clear that no PCA team affiliation was necessary. There were groups in the competition that were not PCA-affiliated, including the group that won the group stunt gold medal.

"In fact, in an effort to level the playing field and reduce the perception of PCA exclusivity and potential bias, groups were encouraged to name and uniform themselves in such a way that did not clearly identify them by their PCA team," Toogood added. "Many chose campy themes (hence the 'caricature' reference in the Paris 2018 report) that were exceptionally amusing to our sold-out house of spectators. The competition was sold-out so far in advance, that Paris 2018 actually had to open up for a second round of ticket sales."

In my sport, wrestling, the usual format calls for the men's and women's freestyle tournaments to be held on the same day as exhibition matches for wrestlers who have little or no competition in their own weight/age/gender groups. Wrestlers WithOut Borders and the Gay Games were the first to offer women's wrestling in a major international meet when they introduced it in 1994, 10 years before the Olympics. Because the same number of weight classes are offered in both men's and women's competition (unlike the Olympics, which offers fewer women's divisions), exhibitions — many across gender lines — form a key component of the female and gender fluid wrestlers' Gay Games experience.

But Paris disdained that model and instead moved the exhibitions to the next day — when wrestlers who otherwise would have participated in them were recovering or involved in the grappling tournament. Hence, several women did not get the exhibitions they expected.

"We sometimes felt that we were being asked to impose an archaic and macho vision of the wrestling," the Paris wrestling report said. "We tried very hard to move forward concerning the event — to feminize, diversify, innovate, and propose something new. If associations are asked to take charge of the venue and competition, they must be trusted and especially listened to regarding their vision of the event."

Which would, of course, be the Outgames model.

• The FGG's technological regression is crippling the cohesiveness of the Gay Games movement. In the late 1990s, San Francisco volunteer Erich Richter designed a state-of-the-art Debby Award-winning website for the federation. In 2004, while I was volunteering on the communications committee, I increased outreach to news media and participants by expanding the site and adding a participant-focused electronic newsletter.

Since then, the newsletters have been published irregularly and lost their focus on participants, and the website has undergone a series of redesigns and collapses.

"The FGG did not have an up-to-date site for several years during the preparation of Paris 2018 Gay Games," the public relations report said. "The FGG messages on social networks and in newsletters were not dynamic and did not focus on the issues of LGBT sport and culture. The FGG does very little, too little, regarding communication and public relations. Each host must start from zero, losing valuable time and resources. The FGG does not promote its brand, resulting in a cause and event that is unknown by most people. Marketing and communication should be the main activity of the FGG, its board members, and its delegates — for the entire four years of the event cycle."

Head scratcher
• The most puzzling report was one filed by Emy Ritt, former FGG president who also served as site selection and host relations officer before her tenure with Paris 2018. She cited many of FGG's known weaknesses and repeatedly introduced her complaints with the phrase "considering the FGG requires a payment of $400K-$500K from the host" before saying more FGG resources should have been devoted to this, that, and the other.

The comments are puzzling because during her tenure up to, and through, the 2014 Gay Games, she was in the optimal position to help the FGG focus on those issues instead of expending the federation's limited resources on constant rapprochement discussions with the failed-enterprise Outgames.

• No shocker here: the broiling and parched opening ceremonies received positive comments from less than 20% of the participants, according to a post-game participant survey conducted by the FGG. All other aspects of Paris 2018 received approval ratings of at least 60%.

Participants polled by the FGG showed that more than 80% were happy overall with the sports themselves as well as transportation, the accreditation process, and the closing ceremony; and almost every other aspect of the event earned at least a 60% approval rating — except the opening ceremony, historically the bane of the larger-scale Gay Games.

Part of that, the reports noted, was that because too many tasks — ceremonies, parties, village, ticketing, access control, and payment system — were all overseen by just one individual, which reduced organizers' ability to oversee outsourced operations. That was especially problematic when the opening ceremonies attendees were greeted by a huge heat wave, poor access to food and beverages, and were steered by volunteers who often did not know where to send them. For instance, the report said, the subcontractor for food and beverages had been prepared for 4,000 people — not the 15,000 expected.

As advice for future hosts, the report offered, "Never trust an artistic director when he says 'Trust me, it will be amazing.' Never trust politicians when they say 'two-minute speech' — especially if they are French."