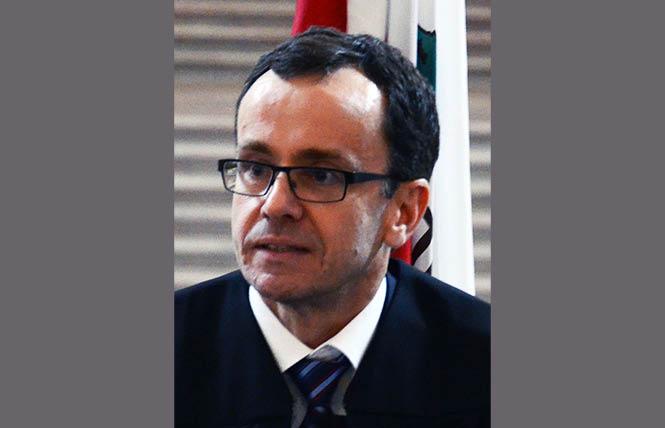 Two gay Bay Area judges are among those tapped to advise California Governor Gavin Newsom on his picks to fill judicial vacancies. San Francisco Superior Court Judge Joseph Quinn and San Mateo County Superior Court Presiding Judge Jonathan Karesh are two of several LGBT community members proffering input to the governor on who he should name to vacant seats on court benches across the state.

In late June Newsom revealed the members of eight regional Judicial Selection Advisory Committees, known as JSACs for short, providing him important feedback on judicial candidates for nomination and appointment to vacant seats on the state's 58 superior courts, the Court of Appeal, and Supreme Court. It marked the first time that the JSAC members had been publicly revealed.

The eight JSACs represent the Bay Area, Central Coast, Central Valley, Inland Empire, Los Angeles, Northern California, Orange, and San Diego regions. Comprised of attorneys and judges, they live and work in the region of the committee on which they serve; Quinn and Karesh are on the 19-member Bay Area Committee. Also on the committee is Alameda County Assistant District Attorney Kim Hunter, a gay mom who is multi-racial; she is of African American and German heritage.

Their input is preliminary and nonpartisan, noted the governor's office, and helps to ensure California's judiciary is diverse and inclusive. They will review all candidates before forwarding their names to the governor for review.

"Judges make decisions every day that affect every Californian," stated Newsom, a former San Francisco mayor who had been serving as lieutenant governor until his gubernatorial swearing-in in January. "The people of our state have little insight on the process by which judges are chosen, it is only fair that the public knows who is helping to select the people who will serve them. I thank the new members of the Judicial Selection Advisory Committees for taking on this essential function of our democracy."

The judicial trio is among the 62 LGBT judges serving on courts in the state as of December 31, 2018, according to the latest demographic data for the 1,743 members of the bench.

Newsom has yet to announce any judicial appointments since taking office January 7. Nor has his office indicated what his timetable is for doing so.

As the Bay Area Reporter has previously reported, Newsom could name either the first known bisexual or transgender person to the state's appellate bench. By naming Justice Martin Jenkins his judicial appointments secretary, Newsom created a vacancy on the California Court of Appeal, First Appellate District, based in San Francisco.

One possible pick is transgender Alameda County Superior Court Judge Victoria Kolakowski. She first applied last year with Brown's legal affairs office to be considered for an appeal court seat and is seeking to be elevated to the higher court by Newsom. (Kolakowski is the wife of Bay Area Reporter news editor Cynthia Laird.)

And should a vacancy arise on the state's Supreme Court during his four-year term, Newsom could appoint the first out LGBT person to serve on it. All seven of its current members identify as heterosexual, according to their bios and the judicial demographics on the report compiled by the state's judicial council.

Fairchild and Hansell serve on the Los Angeles County Committee, while Colantuono serves on the Northern California Committee.

A full list of the JSAC members can be found here.

SF DA race debates
Two debates are scheduled in the coming weeks with the four candidates seeking to become San Francisco's next district attorney, as George Gascón opted not to run for re-election this year. He is reportedly thinking of running next year against Los Angeles District Attorney Jackie Lacey.

Due to Gascón's decision, this marks the first time in 100 years there is no incumbent candidate running to be San Francisco's district attorney, noted the SF Eastern Neighborhoods Democratic Club, which is co-sponsoring one of the debates between the quartet of office seekers. They are Deputy San Francisco Public Defender Chesa Boudin, Deputy California Attorney General Leif Dautch, Alameda County prosecutor Nancy Tung, and Suzy Loftus, a former San Francisco prosecutor who was president of the city's police commission.

The first of the candidate debates is being co-hosted by the Alice B. Toklas LGBT Democratic Club and the Gay Asian Pacific Alliance. It will take place from 6 to 8 p.m. Monday, July 29, at the African American Art & Culture Complex, located at 762 Fulton Street in the city's Western Addition.

Both the Alice club and GAPA will decide on endorsing in the race after the debate. The more progressive Harvey Milk LGBTQ Democratic Club early endorsed Boudin in May.

The second debate will be held from 6 to 8 p.m. Tuesday, August 6, at the UC Hastings School of Law's Louis B. Mayer Auditorium, located at 198 McAllister Street, in the city's Civic Center district.

In addition to the Eastern Neighborhoods Democratic Club, the other co-sponsors are the ACLU of Northern California, Indivisible SF, and the Willie B. Kennedy Democratic Club.

Updated, 7/23/19: This column was updated to include an Alameda County assistant district attorney to the judicial committee.