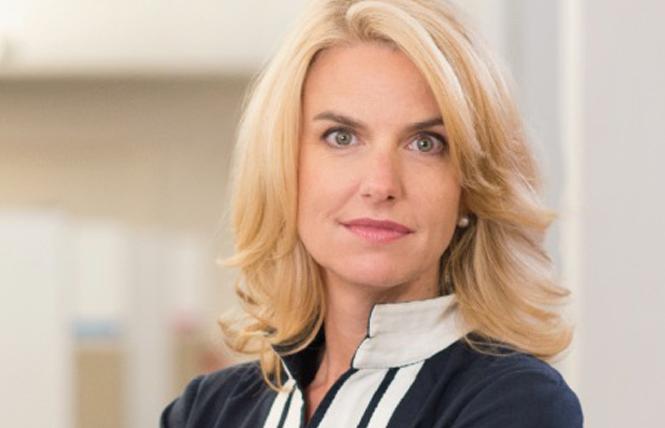 To which we say: too bad it didn't.

If there was ever an organization that has strayed so far from its founding mission as to become irrelevant, it's GLAAD, which is based in New York City and now focuses on kissing up to celebrities and raising money from wealthy donors like the Getty family and its ritzy media award galas in New York and Los Angeles.

Its name, which used to stand for the Gay and Lesbian Alliance Against Defamation, was jettisoned years ago, reduced to a jumble of letters that, if you weren't around in the late 1980s or 1990s, wouldn't know what they stood for. At one time, GLAAD was front and center in the culture wars over gay rights. It ran a regular media column in this publication, where it called out egregious offenders of anti-gay bias among mainstream media outlets. It got its start going after homophobic coverage of HIV/AIDS in the New York Post.

Last week, when faced with a perfect example of homophobia, GLAAD couldn't so much as type out a tweet, much less issue a news release condemning it. Yes, we're talking about the lengthy homophobic rant about gay presidential candidate Pete Buttigieg that was written by Dale Peck, a gay man, and published online by the left-leaning New Republic. The magazine quickly removed the article when it was met with howls of protest, which proves that it should have never been published in the first place. And, whereas GLAAD should have taken the lead on issuing a denouncement, that was left to right-leaning publications like the Washington Examiner, of all outlets.

For those who may have missed it, Peck's article stated that Buttigieg is an "Uncle Tom" of the gay community. But instead of using the phrase "Uncle Tom," Peck called him "Mary Pete."

Peck's passage that caused the most outrage read in part: "All this makes Mary Pete different from every other left-leaning neoliberal in exactly zero ways. Because let's face it. The only thing that distinguishes the mayor of South Bend from all those other well-educated reasonably intelligent white dudes who wanna be president is what he does with his dick (and possibly his ass, although I get a definite top-by-default vibe from him, which is to say that I bet he thinks about getting fucked but he's too uptight to do it) ... So let's dish the dish, homos. You know and I know that Mary Pete is a gay teenager. He's a fifteen-year-old boy in a Chicago bus station wondering if it's a good idea to go home with a fifty-year-old man so that he'll finally understand what he is. ... the last thing I want in the White House is a gay man staring down 40 who suddenly realizes he didn't get to have all the fun his straight peers did when they were teenagers. ... I want a man whose mind is on his job, not what could have been — or what he thinks he can still get away with."

This piece of garbage deserved swift condemnation from GLAAD when it was blowing up online — but that never materialized.

We're not the only ones to find fault with GLAAD. Mark Segal, publisher of the Philadelphia Gay News and a Stonewall veteran, took the organization to task for the terrible job it did for the recent Stonewall 50 celebration in New York. Segal was unsparing in a recent PGN editorial about GLAAD failing to involve activists who were at Stonewall or the first gay Pride as primary resources to mainstream media outlets.

"Mainstream media wanted to understand how coverage had changed in 50 years," Segal wrote. "From GLAAD, they received a false timeline and a lack of resources."

Segal accused GLAAD of ignoring not only those who were at Stonewall, but also those who created the first gay youth organization and the LGBT community center in New York. Media sources, he wrote, "actually did the homework and changed GLAAD's timeline, making a mockery of the LGBT org's so-called guide."

He called out GLAAD President and CEO, Sarah Kate Ellis, for its guide's historic omissions. We last criticized Ellis about a year ago when she wrote an op-ed for the Advocate stating that GLAAD would embark on a multi-year education effort for a constitutional amendment for equality — basically an Equal Rights Amendment like the one that failed back in the 1970s, except this one would include sexual orientation and gender identity. She is still stumping for that amendment — it was a topic in the recent Times piece — despite it having zero chance of passage. What a waste of community resources at a time when we have real issues before us such as religious freedom exemptions and a racist president to defeat.