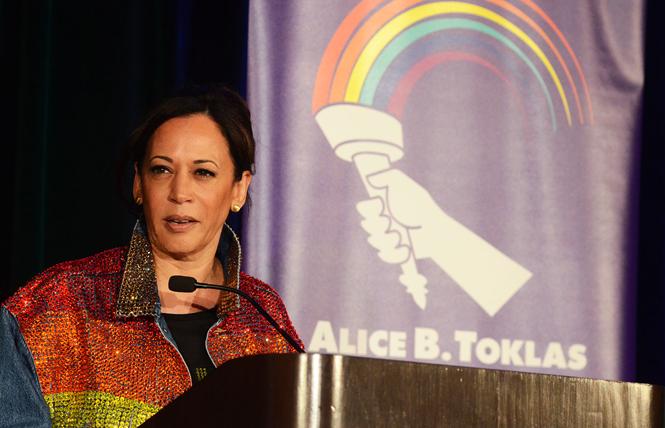 Wearing a rainbow-striped sequin jacket, Harris, a former San Francisco district attorney and state attorney general, was mobbed by supporters who were taking selfies at the table where she was sitting even before she took the stage at the Hyatt Embarcadero. Then, she received a standing ovation.

"There's plenty of evidence, just look at his 'rap sheet,'" the junior senator from California said, to laughter from the crowd.

She recited a litany of what she and many others believe are the president's harmful policies affecting the LGBTQ community, such as the ban on trans service members. The "tweeter-in-chief," she added, also has been "silent" in the "deadliest year for trans people," referring to the deaths so far of 11 black trans women in the U.S.

Harris, who as state attorney general refused to defend Proposition 8, the same-sex marriage ban, in court, recalled the day the U.S. Supreme Court tossed out the ballot measure and she arrived at San Francisco City Hall to marry Sandra Stier and Kris Perry, the lead plaintiffs in the case to overturn Prop 8.

"We will fight to pass the Equality Act," she said, referring to the federal legislation that Speaker Nancy Pelosi (D-San Francisco) saw passed in the House in May. It faces an uncertain future in the Republican-controlled Senate.

"I promise you Alice, as president I will fight every day for everything we've been fighting for for years," Harris pledged.

Aria Sa'id, a black trans woman who's executive director of the Compton's Transgender Cultural District, was sitting next to Harris at the breakfast.

"She's really sweet," Sa'id told the Bay Area Reporter in a brief interview afterward. "I am on a high from her keynote speech and the work she's done to advance equity and equality."

Gay District 8 Supervisor Rafael Mandelman, who has not yet endorsed a presidential candidate, said he was nonetheless impressed with Harris.

"Kamala was pretty amazing this morning," he said in a brief interview.

Pelosi also received a standing ovation when she delivered her remarks. She said the importance of the Equality Act is that it adds to the federal Civil Rights Act to protect sexual orientation and gender identity.

Addressing Trump, Pelosi said, "Let us introduce you to San Francisco values," which she explained "are about respecting the worth and dignity of everyone."

"So here we are, in an important time. The Founders said 'time has found us.' It is a time of urgency."

Pelosi was introduced by Mike Shriver, a gay man living with AIDS and an activist, who extolled Pelosi's longtime support for HIV/AIDS funding while in Congress. Pelosi, in turn, credited "outside mobilization" by AIDS advocates and others over the years, for creating support in the halls of Congress.

"The demand for change has helped us overcome other discriminations," she added.

London Breed, who introduced Harris, took a moment to revel in her first Pride season as San Francisco mayor (last year, she was mayor-elect) and touted $2 million in rental subsidies for trans people in her new budget. While the spending document has not yet been formally approved, the Board of Supervisors last week completed its work. Breed is expected to sign the $12 billion two-year spending plan later this month.

California Lieutenant Governor Eleni Kounalakis, the first woman ever to hold the post, talked about the time she and her friend, who had just come out to his family as gay, attended the San Francisco Pride parade 30 years ago.

"I saw him filled with pride, and as an ally, it was transformative for me, too," she said.

"We need our community at the table and we need our allies strongly standing with us," he said.

Mandelman told the crowd that he's had a productive first year in office, but that he would like some company on the board.

"It's a tremendous honor to be your queer supervisor, but now we need more than one," he quipped. "It's a little lonely here."