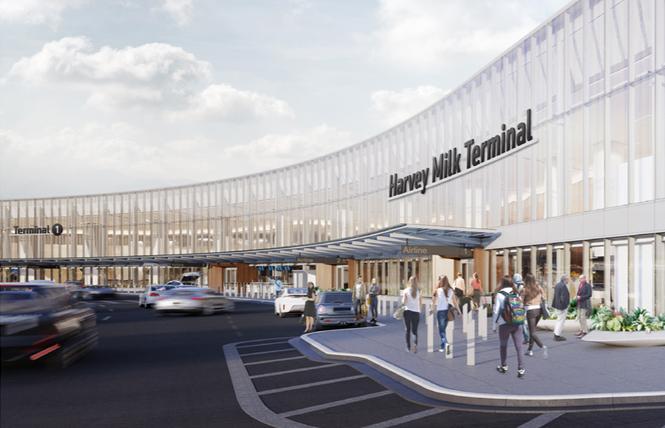 Revised drawings for the Harvey Milk Terminal exterior signage at San Francisco International Airport renewed community complaints for showing the gay icon's name would not be used at all of the facility's entrances. Photo: Courtesy SFO

Rules outlining how the signs for the Harvey Milk Terminal should appear at San Francisco International Airport won unanimous backing from the Board of Supervisors Tuesday.

After the board votes a second time April 16, the ordinance will be sent to Mayor London Breed to sign into law. Breed's office has told the Bay Area Reporter that she will do so once it lands on her desk.

That led to complaints from Milk's family and LGBT leaders that the signs should be reversed, with Milk's name given more prominence. District 9 Supervisor Hillary Ronen introduced an ordinance that would require as much.

Yet, in March, airport director Ivar C. Satero unveiled a mockup of the exterior signage for the terminal that included Milk's name at only one of its entrances. Due to concerns about passengers being able to navigate through the airport, Satero said SFO staff preferred using just Terminal 1 and dropping Milk's name on most of the signage so as not to confuse travelers.

The airport's stance elicited a new round of condemnation and prompted statewide LGBT advocacy organization Equality California to rescind an award it had planned to bestow on SFO at its local gala fundraiser in May. Ronen also amended her ordinance to force the airport to use Milk's name on all signs for the terminal throughout the airport.

Due to the change having a fiscal impact for the airport — replacing all of the existing Terminal 1 signs is estimated to cost $1.3 million — Ronen's ordinance was sent back to committee for further review. Along the way it gained three co-sponsors: Supervisors Gordon Mar, Matt Haney and Rafael Mandelman.

In introducing her ordinance Tuesday, Ronen said the legislative fight over the aviation accolade for Milk has been "frustrating," especially the need to dictate "such details as the size of the signage" for the terminal.

"But the truth of the matter is it has been an uphill battle and a fight to the end every step of the way to name this terminal after Harvey Milk, one of the most important civil rights leaders whose political career and life and legacy was born and raised right here in San Francisco," said Ronen.

After moving to the city's then-burgeoning gay Castro district in the early 1970s, Milk made history by becoming the first out gay person elected to public office in both San Francisco and California in November 1977. Tragically, he was killed 11 months after being sworn in as a supervisor inside City Hall along with then-mayor George Moscone by disgruntled former supervisor Dan White.

The naming honor for Milk at the airport has been an arduous bureaucratic slog, as gay former San Francisco supervisor David Campos, whom Ronen had worked for, first proposed in 2013 naming all of SFO after Milk. When that proposal didn't fly with much of the public, Campos and the late mayor Ed Lee compromised on naming one of SFO's four terminals after the beloved gay leader.

It wasn't until last year that the choice of Terminal 1 was finalized. Considering the rollback of LGBT rights by President Donald Trump over the last two years, the enactment of anti-LGBT laws by a dozen states during that time, and a hostile environment for LGBT people in many countries, Mandelman said this week that Campos had been right to propose naming the entire airport in honor of Milk.

"I will confess I find this measure before us frustrating. It feels a little bit like we are arguing over the crumbs," said Mandelman, the lone LGBT person serving on the board. "I think Supervisor Campos was correct in 2013 in believing it was right and appropriate and significant for San Francisco to put Harvey Milk's name on the airport in a way travelers coming from around the world, and from countries where LGBT people are being killed and their lives are at stake, confront the reality it was named after a gay man who changed the world."

At one of the committee hearings held last month, a number of LGBT people spoke about the importance it will mean for them to fly into the Milk terminal.

"The city should be proud to have him as our first openly gay supervisor," said Robert Goldfarb, who has lived in the city for 21 years and chairs the committee overseeing the leather and LGBTQ cultural district South of Market. "I am delighted the city is displaying that pride by placing his name on Terminal 1. His name should be proudly displayed."

The first travelers to use the Milk terminal, currently undergoing a yearslong $2.4 billion renovation, are expected to do so this summer when a portion of the facility reopens. The project is slated to be complete by 2024.