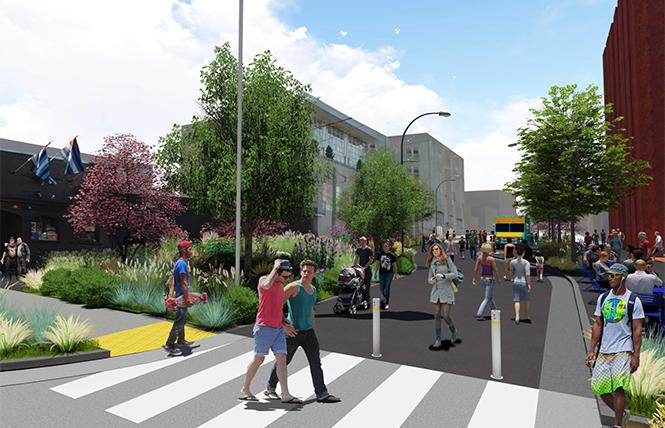 As it wends its way through the city's bureaucracy to obtain the required permits it needs, a leather-themed public plaza won approval this week from a committee of the San Francisco Arts Commission.

The oversight body's Civic Design Review Committee voted 4-0 in support of Eagle Plaza, named after the South of Market gay-owned bar it will front on a portion of 12th Street. The parklet is seen as a focal point for the LGBTQ cultural heritage district city officials created in western SOMA to celebrate its being the home of the city's leather community.

Local development firm Build Inc. will pay for construction of the plaza as part of a $1.5 million in-kind agreement with the city for approval of its mixed-use development across the street from the Eagle bar on what was a surface parking lot. Construction began this summer at 1532 Harrison Street on three seven-story buildings consisting of 136 rental homes.

Place Lab, which was started by Build and this summer merged with the nonprofit San Francisco Parks Alliance, is overseeing the design and construction of Eagle Plaza. It aims to break ground in early 2019 and dedicate the parklet ahead of next year's Folsom Street Fair at the end of September.

As the Bay Area Reporter noted in an October article when the arts panel last reviewed the plans for Eagle Plaza, the scope of the project has been significantly scaled back due to access issues voiced by fire officials. The greenspace in the parklet, which will be built on 12th Street between Harrison and Bernice streets, has been reduced in order to accommodate fire trucks and other safety vehicles.

Rather than reduce the street's width, the design now calls for a 28 foot wide curved street allowing for two-way traffic through the plaza. Bollards will be used to close off the street at both ends for special events.

The border for a gathering space in front of the Eagle bar dubbed the Eagle Porch has been designed to allow for fire trucks to back into the area and turn around inside the plaza. San Francisco Public Works also required that the plaza's chairs and tables be removable rather than permanent.

The arts committee had signed off on the overall plan for the site in October. But it had asked that the design team return with a comprehensive planting plan, updated renderings, and images of the seating before taking a final vote on Phase III of the project.

It did so this week largely without comment after hearing from Mark Bonsignore, a program manager with Place Lab overseeing the plaza plans.

Bonsignore told the B.A.R. that he is working with Andres Power, Mayor London Breed's policy director, on expediting the permit process. He expects that District 6 Supervisor-elect Matt Haney, who represents SOMA, in early January will introduce the plaza's major encroachment permit to the board, which is needed to allow construction to begin.

The parklet's estimated cost is $1.85 million. In addition to Build's contribution, the city awarded $200,000 in grant money to the plaza. The Friends of Eagle Plaza has raised $35,000 over the past three months.