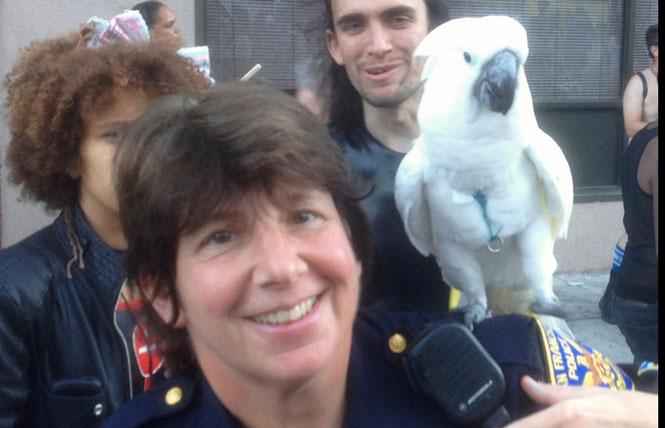 Even in retirement San Francisco police Lieutenant Lisa Frazer will forever be remembered as the Castro's beat cop. Out as a gay woman within the department, she patrolled the city's LGBTQ neighborhood for close to a decade starting in 1999.

"Some of my best times in my job was as the Castro beat officer," Frazer recalled in a recent phone interview with the Bay Area Reporter. "I loved my job. I loved being a San Francisco police officer. I loved representing our department and being a part of our community."

But her time with the San Francisco Police Department was cut short due to her needing to medically retire in February. This weekend she and her wife are co-hosting a private retirement party to bring Frazer some closure as she transitions into being a civilian again.

"I had to retire early because I got injured. I am still wrestling with it," said Frazer, 59, who grew up in Concord and lives in the East Bay. "I planned on staying with SFPD 30 years because I am a lifer or longer. I had an opportunity to work in one of the greatest cities in the world. I have truly valued and appreciated the opportunity to serve the city and county of San Francisco."

In 1997, Frazer transferred to Mission Station, and when the gay officer who had the Castro beat left, she took over the role. Former SFPD Sergeant Carri Lucas, a straight ally who retired in 2009, worked with Frazer and told the B.A.R. that she stood out for being "an extremely hardworking person" with "tremendous integrity."

Lucas added that Frazer epitomized what a good beat cop should be, having the necessary abilities to develop relationships with business owners and residents of the Castro to investigating felonies and other crimes.

"Being a good beat cop is the true meaning of community policing, and Lisa was a true beat cop," said Lucas. "Being a beat cop isn't just going around shaking hands with merchants, there is crime to be dealt with. Lisa would deal with it; she was an excellent investigator."

Gay former District 8 Supervisor Bevan Dufty, who represented the Castro, told the B.A.R. that Frazer remains to this day popular in the LGBTQ neighborhood.

"Lisa will never walk down Castro Street without people waving at her, hugging her, and doing all of that stuff," said Dufty.

He recalled one occasion when he accompanied Frazer and the leader of a youth services agency to visit a single-room-occupancy hotel on upper Market Street. The nonprofit was partnering with the city to rent rooms there, in order to house LGBTQ homeless young adults. Observing nearby were two young gay men, their possessions packed in bags they had with them. It turned out that Frazer was trying to get them placed into the housing, recalled Dufty.

"It was such a non-police thing but she was like the mother hen who sticks around and says, 'I can help you get into housing.' They did in fact move in," said Dufty.

It demonstrated to Dufty how Frazer approached people, whether they were living on the streets or an "A-list gay" member of the community.

"Lisa treated everyone the same way: strong but fair," he said. "She was a great credit to our community and exemplified what a San Francisco police officer could be."

After being promoted to sergeant in 2008, Frazer was reassigned to Southern Station. She went to the Homeland Security Division and special operations in 2014, then became a lieutenant in 2017 and was assigned to the police station at San Francisco International Airport.

"I actually loved it because everyday I got to go to work and have a direct impact on safety and security for my community," said Frazer, who also served as a police academy instructor, a field training officer, a crisis intervention officer, and a hostage negotiator throughout her career.

While patrolling on bike during a Bay-to-Breakers marathon several years ago, Frazer responded to a call for assistance. But she hit a pothole on the Hayes Street hill and flew about 20 feet over the handlebars of her bicycle.

Due to her experience as a fifth-degree black belt in jujitsu, which she started taking in 1974, Frazer used her skills to roll as she landed on the ground and avoided breaking her arms or legs. After being checked out at the hospital, and thinking she had avoided serious injury, Frazer went to work the next day.

But she had suffered an injury, and its improper diagnosis eventually led her to take a medical leave then retirement. It was an outcome she has struggled to accept, as she never planned to leave the police force so soon.

"We are alpha dogs. We are the ones who go into a firefight. We risk our lives, so any weakness is counter to our way of being, our culture," Frazer explained as for why it has been a difficult transition.

Unable to work, she is devoting her time as president of the nonprofit dog rescue Golden Gate Scottish Terrier Rescue. Frazer had appeared in a 2007 recruitment ad for the SFPD with her Scottie named Bailey, who passed away in 2015.

She now owns two black coat Scottish terriers, 7-year-old Max McBarker she adopted as a puppy, and 8-year-old Bennett she rescued about seven months ago. Their description as "a big dog in a little body" reminds her of herself, said Frazer.

"My life of service is not going to end here. It is going to change form. I think I will always be a helper," said Frazer adding that, for now, "my main focus is to get better and live a long and healthy life for as long as I can."

She expressed her gratitude to the city for giving her the opportunity to be a police officer.