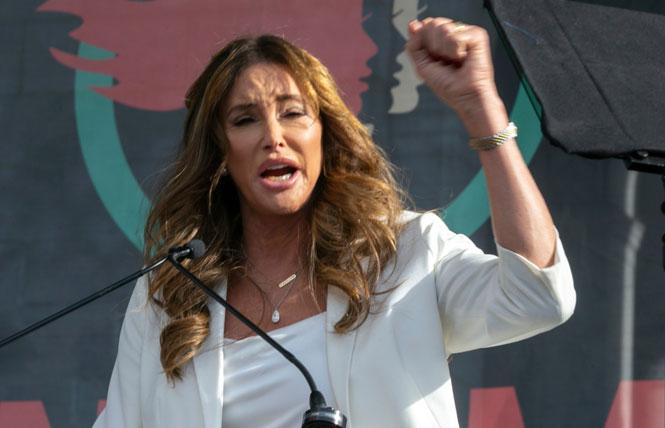 Caitlyn Jenner has been hired as a contributor for Fox News. Photo: Courtesy AP

Of course Fox News would announce its hiring of Caitlyn Jenner on Transgender Day of Visibility. The trans former Olympic gold medalist and Republican California gubernatorial candidate in last year's recall election made her first appearance as a contributor that same evening — March 31 — on her pal Sean Hannity's program. Jenner, part of the Kardashian clan, is not a spokesperson for the LGBTQ community, and to her credit, she hasn't claimed to be one. But her conservative views align with her new employer, and that's the problem. "Caitlyn's story is an inspiration to us all," stated Fox CEO Suzanne Scott in making the announcement. "She is a trailblazer in the LGBTQ+ community and her illustrious career spans a variety of fields that will be a tremendous asset for our audience."

Scott didn't mince words with that statement — Fox News' audience no doubt will agree with Jenner, if they can get past the fact that a trans woman is talking to them. Moreover, Jenner's hiring is just the latest salvo in Fox News' continued war on trans people, cynically using a conservative trans former athlete to do it. During last year's gubernatorial recall, in which Jenner received a scant 1% of the vote, she earned the enmity of LGBTQ advocates with her position on the issue of trans student athletes competing on teams that match their identity, as we reported. "That is why my position has been so clear and consistent: biological boys should not be allowed to participate in girls' sports. It is a question of fairness," stated Jenner, who transitioned long after her athletic career had ended. "To be clear, I do believe that athletes that have fully transitioned should be able to participate in sports provided they meet all other eligibility criteria as defined by their state, local, league, conference, or school rules."

In a Fox News interview in January, however, she seemed to change her mind, saying that trans Ivy League swimmer Lia Thomas shouldn't compete with other women, as the Washington Post. reported, even as Thomas met eligibility criteria. She even urged the NCAA to "stop this right now." The body overseeing collegiate sports didn't stop, but instead released new rules governing trans athletes. Thomas, for her part, underwent her transition working with NCAA officials. Academic researchers compared Thomas' times before and after she transitioned, the Post reported, finding she was about 5% slower in her recent races, according to a recently published study. But they also determined that the gap between elite male and female swimmers is 10% to 15% for shorter distance races and 7% to 10% for longer ones. The issue of trans athletes, particularly women, competing on women's teams is one of the reasons lawmakers in so many states have introduced bills to keep trans girls off of girls' teams even as research on the issue is not definitive.

Fox News was right there, leading the charge against Thomas. Media Matters for America, a left-leaning watchdog group, reported in January that the network has "obsessively" covered Thomas. "From December 3 through January 12, the network aired 32 segments on Thomas' swim career," the site reported. "Throughout Fox's coverage of the story, hosts and guests spewed dehumanizing rhetoric about Thomas and went so far as to assert that 'this is like everyone has taken a crazy pill and no one wants to admit that this is wrong.'" The right-wing Washington Examiner, no friend to trans people, reported that Jenner would "love" to talk with Thomas. With her new perch at Fox News, Jenner may get her wish, but Thomas would be wise to decline.

In this era of polarizing politics, the trans community has been under constant attack by conservatives. Florida law will soon prohibit teachers from teaching about LGBTQ issues, while Texas wants trans kids to forego medical care and label their parents as child abusers if they provide medical care in consultation with their child's doctor. It's no wonder the mental health of trans people, especially minors, is a serious concern. Jenner should bone up and focus on the facts. She should use her platform at Fox News to help its viewers understand just why these draconian laws are so harmful — and talk with people who have a deep understanding of LGBTQ youth and mental health issues, like those at the Trevor Project. That would involve Jenner stepping outside of her comfort zone of the wealthy and privileged in which she lives, and in which most trans people, particularly trans people of color, do not.

We're not optimistic, however, that Jenner will use her new TV gig for anything other than to harm the trans community and feed a steady diet of red meat to her red state audience. And that's a shame. Instead of pandering to fellow conservatives, Jenner could help rewrite the narrative and flip the script that Fox News has used for so many years — but don't count on it.