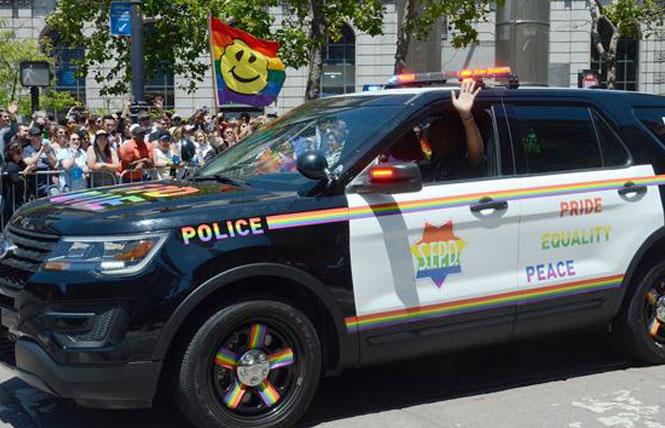 As San Francisco Pride looks to enforce for the first time its ban on police marching in uniform when the in-person event returns in June, other cities are also grappling with the issue.

San Francisco Pride in September 2020 announced that the members of the Pride Alliance of the San Francisco Police Department would not be allowed to march in uniform going forward, as the Bay Area Reporter noted at the time. The 2021 Pride parade was canceled due to the COVID pandemic, meaning this year's event will be the first where the policy will be implemented.

Police officers would be allowed to march out of uniform, according to SF Pride's policy.

In Southern California, a meeting held at St. Paul's Cathedral in San Diego March 23 underscores the challenges Pride organizations around the country are facing when it comes to whether or not they will allow uniformed police officers to participate in their annual parades.

At that meeting, organized by San Diego Pride's Healing and Safer Communities Commission, LGBTQ bar and business owners; members of the LGBTQ Black Coalition; transgender and Black, Indigenous, and people of color activists; community activists and leaders; and "a top gay FBI agent" gathered at St. Paul's to discuss San Diego Pride's 2-year-old ban on police officers marching with their uniforms and guns in the annual San Diego Pride parade. The request for the ban had initially come from the LGBTQ Black Coalition, transgender, and BIPOC activists, reported LGBTQ San Diego County News. It was one of a series of meetings organized by HSCC.

Fernando Lopez, the nonbinary executive director of San Diego Pride, said the news site's version of what happened at the meeting was completely incorrect. Negotiations, he told the B.A.R. in a phone interview April 5, are ongoing.

Around the United States, Pride organizations have been wrestling with the same question, with many of the larger organizations electing to ban the presence of uniformed police officers in their parades, while offering compromises that rarely seem to ameliorate the feelings of the police they affect. Trans and BIPOC persons say, however, that the history of police aggression against their communities more than merits the bans. 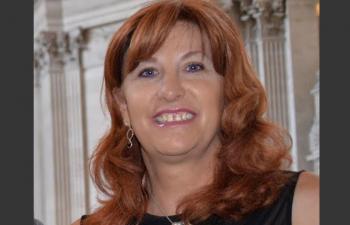 SF policy
The San Francisco decision in 2020 came after an incident in 2019, the last in-person parade before the COVID epidemic shut everything down. Parade attendee Taryn Saldivar, who describes themself as a nonbinary dyke, was roughed up and injured during an attempt by San Francisco police officers to break up an anti-police and anti-corporate demonstration that blocked the parade route for almost an hour, the B.A.R. reported. Saldivar, who was not participating in the protest but standing on the sidelines, later filed a federal lawsuit for unlawful detention and arrest against the city and law enforcement officers for how they were treated by SFPD. That suit was settled in September 2021, awarding Saldivar $190,000.

This June police are welcome to march in the parade, provided they do not appear in uniform, Suzanne Ford, interim executive director of SF Pride, reiterated to the B.A.R. in an email.

"In providing the SF Pride Parade, we are working to do everything we can to practice radical inclusion, supporting those who are marginalized within our community," Ford, a transgender woman, wrote. "We acknowledge and appreciate the steps that the police have taken to heal decades of mistrust between the department and the city's LGBTQ+ communities. However, we know that officers in full uniform affect marginalized people within our community."

To that end, "We are all in agreement that to end the ban, a mutually-beneficial agreement must be created that prioritizes marginalized communities to ensure they are safe, represented, and included," Ford added. 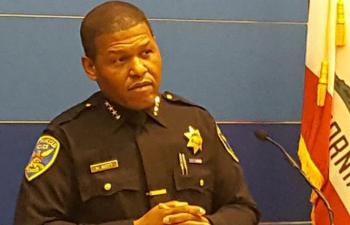 But police officers, especially those who are members of the LGBTQ community or allies, often want to be visible and proud in the parade.

In a February interview with the B.A.R., SFPD Police Chief William Scott said, "I would like to be a part of it. Those conversations are ongoing. I've reached out and the Pride Alliance has asked to be the lead."

"We've got to be there to police the event but we want to be part of it," said Scott, who added that members of the Pride Alliance have expressed "some heartburn" over participating in the parade out of uniform.

Sergeant Nicholas Buckley, chair of the Pride Alliance, said April 5 the organization has, indeed, been in talks with SF Pride.

Portland
Farther north, in Portland, Oregon, relations between the city's police and Northwest Pride are uneasy, at best.

After "quietly" banning firearms from the parade in 2019, the police response was "unreal," said Pride Northwest Executive Director Debra Porta, a lesbian, in a phone interview with the B.A.R. As it turned out, law enforcement in Oregon are prohibited from presenting as police officers unless they're armed, she said.

The violence that rocked the United States in 2020 following the police murder of Black Minnesotan George Floyd seemed to reverberate particularly hard in Portland. Images of shootings, fires, and general mayhem replete with pictures and video of heavily armed Portland Police Bureau officers left many Portlanders, especially LGBTQs and, particularly, people of color, with a pronounced distaste for their local law enforcement agency. Even before Floyd's death, however, PPB was struggling with poor public opinion ("Portland police always look like they're ready for a riot," Porta observed).

"This lack of trust grows in communities of color," the report stated.

Pride Northwest began having conversations with local law enforcement in 2017 around concerns brought forward by people of color about their discomfort attending Pride because of the number of uniformed officers present, said Porta, but police didn't respond well to efforts to find compromise.

"In all honesty, it was like talking to a brick wall," Porta said.

Through a series of meetings with the Alliance for Safer Communities, a queer/LGBTQ+ community advisory council to PPB, Porta said she had come to some startling conclusions.
After speaking with LGBTQ members of the PPB, she realized that, for officers, identity as law enforcement came first, before their marriage status, before their sexual identity. Police identity supersedes everything else, said Porta.

The sense of distrust grew even more profound after those initial conversations.

"We've been accused of trying to force them back in the closet, to go back into hiding," said Porta. In those conversations, "we realized we weren't going to get anywhere, trying to describe to them that there is a whole segment of our community who don't feel safe. They don't understand why people don't feel safe."

As of this year, Portland and Multnomah County law enforcement still may only participate out of uniform.

New York City
New York City, too, has banned the presence of uniformed police officers. In a decision made in May 2021, NYC Pride announced it would ban "corrections and law enforcement exhibitors at NYC Pride events until 2025." During that time, the release stated, "their participation will be reviewed by the Community Relations and Diversity, Accessibility, and Inclusion committees, as well as the executive board. In the meantime, NYC Pride will transition to providing increased community-based security and first responders, while simultaneously taking steps to reduce NYPD presence at events."

That decision followed years of mistrust between NYPD and BIPOC, trans, and queer communities. The decision was then followed the next month with dramatic images of NYPD attacking Pridegoers at celebrations in Washington Square.

"Eight people were arrested on Sunday after skirmishes between the New York Police Department and people celebrating Pride in and around Washington Square Park in New York City," Vice News reported on June 28, 2021. "Reporters on the scene described a wave of battle-ready cops descending on the park."

Dan Dimant, media director for NYC Pride, said officers are welcome to march out of uniform but that decision had not gone down well with members of Gay Officers Action League, the professional organization for LGBTQ police in New York City.

"We want to see some motion to enact change," said Dimant. "We don't see gay officers speaking out against violence against minorities and trans people."

Dimant said they welcome discussions but GOALNY has not expressed an interest in doing so.
No one at GOALNY responded to B.A.R. requests for comments. 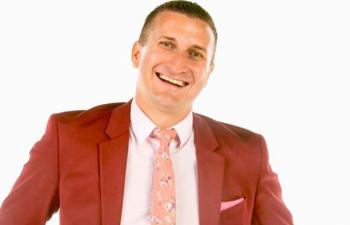 Meanwhile, back in San Diego, discussions between the many law enforcement agencies in San Diego County and San Diego Pride continue, said Lopez, the Pride director. Despite what was reported in LGBTQ San Diego County News, they said, the mayor's office and police haven't sworn off attendance in the parade (San Diego Mayor Todd Gloria, a gay man, did not respond to a B.A.R. request for comment).

The recent meeting was an eye-opening event for many attendees, said Lopez. Many of the attendees — white, cisgender, older gay men — heard for the first time stories from BIPOC and trans folks about the hostility and oppression they had suffered at the hands of police, and they were shocked.

"Several of the men openly cried after, saying they had never heard these stories before," said Lopez.

There have been numerous meetings between SD Pride's HSCC and law enforcement — there are 40 law enforcement agencies in San Diego County, Lopez noted — and a meeting held April 4 went very well, he said. Uniforms are still a sticking point, they said, but the idea of wearing branded polos or T-shirts is not off the table.

"It is our understanding from what was conveyed at the meeting last night, and several other meetings, that any time law enforcement officers are grouped and wearing the same clothing that also designates their area of service, it is considered a uniform," said Lopez. "It was also told to us that each agency has its own specific wording and policy, so I can't speak to the specifics of any of the over 40 agencies in the region. We're still working on the details and finding mutual understanding around language use."

"We're agreeing on 95% of stuff," Lopez said, although there are a few they noted, who seem to be interested in fostering division.

Law enforcement agencies and HSCC are fine tuning the policy recommendations that are going before the SD Pride board later this month, Lopez said, although whether there will be a final proposal to vote on at its meeting April 20 is anyone's guess.

"I'm feeling really good about some of the actual substantive policy reforms," said Lopez. "So, it's not done, because nothing has been voted on yet."