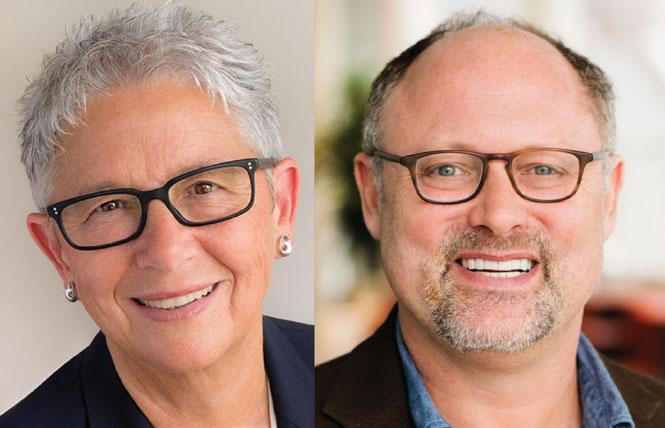 Rizzo, 75, is a lesbian who resides in Tiburon. From 2001-2019 she was president and chief executive officer for Breast Cancer Prevention Partners, a release from the governor's office stated. She was co-chair of the Federal Advisory Committee for the Interagency Breast Cancer and Environmental Research Coordinating Committee from 2010-2013. She served on and was chair of the California Breast Cancer Research Program Council from 2008-2011.

Rizzo was the owner of JR Productions and Great American Music Hall from 1972-2001. Currently, she is a member of the Seventh Generation Social Mission board, the release stated.

In a phone interview April 1, Rizzo told the Bay Area Reporter that she was sworn in and started work February 11 leading the inaugural board that is the result of legislation. While her post as director is full-time and requires Senate confirmation, Rizzo said the body has a year to confirm her and the rules committee has begun gathering information.

The board was established under Senate Bill 158, which Newsom signed last year. The board is in the state Department of Toxic Substances Control. SB 158 requires the board to perform certain activities, including setting of fees related to the handling of hazardous substances and hazardous waste, hearing appeals of hazardous waste facility permitting decisions, and conducting a specified analysis. The law establishes an office of the ombudsperson in the board to receive complaints and suggestions from the public, to evaluate complaints received, to report findings and make recommendations to the director of toxic substances control and the board, and to render assistance to the public.

Rizzo said she is excited about the new position.

"This is a capstone," she said, adding that she had been doing some consulting work since leaving Breast Cancer Prevention Partners. "It's a stellar opportunity."

The board will look at fee structure changes, which she said are underfunded. For example, after a contamination incident, companies sometimes file for bankruptcy and there's no money left to pay for the cleanup. The board will hear permit appeals, and the ombudsperson will be a great asset for the public, she added.

"We are the first oversight board," she said, under this legislation. The board consists of Rizzo as chair and two others appointed by Newsom, two appointed by the Senate, and two named by the Assembly. One of the members is queer former San Diego City Council president Georgette Gómez, though Rizzo said that if she wins her special election for a vacant Assembly seat April 5, as expected, she will need to step down.

Rizzo was featured in the B.A.R. years ago during the fight for marriage equality when she and her now-spouse, Pali Cooper, came within minutes of getting a marriage license during 2004's "Winter of Love" when the state Supreme Court put a halt to the same-sex nuptials. Newsom, then the mayor of San Francisco, had ordered city officials to issue marriage licenses to same-sex couples in February 2004 and the happy couples lined up outside City Hall for about a month before the weddings were halted. Rizzo and Cooper sued the state in 2004 so that they could marry.

Moscone, a gay man, will become the state's top arts official when he takes the helm of the council April 25. Moscone has been chief producer of Yerba Buena Center for the Arts since 2015 and a member of the California Arts Council since 2020, according to a release from Newsom's office.

Prior to that, Moscone was artistic director of the California Shakespeare Theater from 2000-2015. He's a member of the Homeless Prenatal Program Board of Directors and the board of Alice Waters' edible Schoolyard Project, the Chinese Culture Center's board of directors, and the Lorraine-Hansberry Theater Board of Directors, the release stated.

In a phone interview, Moscone said that he's excited about moving from the board of the arts council to overseeing the agency.

"It's an excellent opportunity for artists and arts organizations to get the resources they need to do their work," Moscone said. "I will keep my eye on that prize."

The arts council has a budget of about $30 million, he explained, plus two new cash infusions from the totaling of about $100 million for youth programs and what is called the creative core, which is modeled on the old Works Progress Administration, he said. The council allocates resources in the form of grants and other funding mechanisms such as artists fellowships and arts in corrections.

"My job is to steward resources the state allocated to artists and cultural districts to use equitably and quickly," he said.

Moscone earned a Master of Fine Arts degree in directing from the Yale School of Drama.

The position does not require state Senate confirmation and the compensation is $166,428, the release stated. Moscone is a Democrat.

Moscone is the son of slain San Francisco mayor George Moscone, who was assassinated along with gay supervisor Harvey Milk on November 27, 1978.

Michael Gagne, president of the Tenderloin Tessie board, also noted that organizers are seeking volunteers to help during the event. Shifts are available from 9 a.m. to noon, noon to 4 p.m., and 3 to 6 p.m.

He added that attendees and volunteers will need to bring their ID and proof of COVID vaccination.

Help is also needed Saturday, April 16, from 10:30 a.m. to 3 p.m., and on Tuesday, April 19, from 10 a.m. to noon. These shifts are for truck workers — picking up groceries on Saturday and unloading the truck on Tuesday, the email stated.

SF Historical Society to mark '06 quake anniversary
The San Francisco Historical Society is hosting an open house to commemorate the 1906 Earthquake and Fire Saturday, April 16, from 10 a.m. to 4 p.m. at the SFHS Museum at 608 Commercial Street.

The museum is introducing its new walking tour, "1906 Earthquake and Fire: Chinatown's Devastation and Renewal," at 11 a.m. and there will be two docent tours of the museum at 11 a.m. and 1:30 p.m. There is an earthquake rubble display, first-hand written accounts of the earthquake from survivors, photographs of San Francisco before and after the disaster, and artifacts and relics recovered from the earthquake, including some that people will be able to examine and hold alongside SFHS curators, according to a news release. The media room will be showing a loop of short films about the earthquake and fire.

People can visit the underground vault, where dusty crates used to hold a fortune in gold. The top floors of the original building came crashing down in the 1906 earthquake, but the ground-level floor and the subterranean vaults survived and some of the original brick walls still stand.

The museum is built on the site of the first U.S. Mint in the West, which opened in 1854 during the California Gold Rush to turn nuggets and gold dust into coins and bullion. Later it was used as a subtreasury, where the government stored millions of dollars in gold and silver bars.

Light refreshments will be served. For more information, and to register for the walking tour of Chinatown and the docent tour of the museum, click here. Tours are free for SFHS members; $20 for non-members. Entry to the SFHS Museum is free for all.

According to a news release, the conference is part of a similar community forum created over six years ago by Kin Folkz and Evelyn Carmack to share effective strategies and build skills to end anti-Blackness and implicit bias in the LGBTQ+ community. This latest edition, usually presented in-person, marks the second time it will be held online with an international audience.

Co-presented by Spectrum Queer Media Center and the Queer Healing Arts Center, the conference will have programming for young children, older students, and adults, the release stated.

The conference will include films, a virtual art exhibit, workshops, and panel discussions.

People should RSVP by Friday, April 8. For a schedule and to RSVP, click here.

As the B.A.R. previously reported, Adrian Shanker was named the new leader of the North Bay LGBTQ and HIV/AIDS community center in February. Shanker, a gay man, comes to the Bay Area from Pennsylvania, where he founded the Bradbury-Sullivan LGBT Community Center in Allentown.

The upcoming event, titled "New Horizons," will also be a farewell to Dana Van Gorder, a gay man and the recent executive director at the Spahr Center. Benita McLarin, Marin County's director of health and human services, will be recognized for guiding the county's response to COVID.

Tickets for the event are $65. People who can't attend are welcome to make a donation. For tickets and more information, click here.