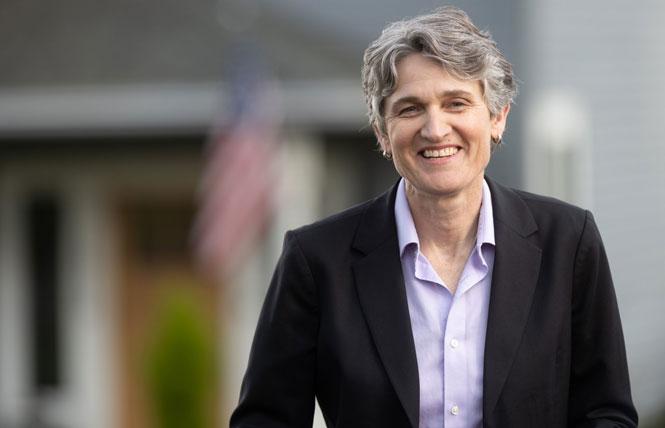 Ahead of her state's Democratic Party primary May 17, Oregon U.S. House candidate Jamie McLeod-Skinner is swinging through the Bay Area this weekend to attend several fundraisers for her campaign. The first lesbian to serve on the Santa Clara City Council, McLeod-Skinner would be the first lesbian elected to Congress from the West Coast.

She would also be the first LGBTQ House member from the Beaver State should she win her race for the newly drawn 5th Congressional District in Oregon. She is in a tough primary campaign against incumbent Congressmember Kurt Schrader (D-Canby), a moderate Democrat whom she has criticized as being too conservative.

"Our momentum has been really good," McLeod-Skinner told the Bay Area Reporter in a recent phone interview about her campaign.

In recent weeks local Democratic Party committees in the counties of Linn, Deschutes, Marion, and Clackamas, where Schrader lives, have endorsed McLeod-Skinner in the primary race.

While the LGBTQ Victory Fund has yet to endorse her candidacy, McLeod-Skinner has the support of LPAC, which works to elect out women across the country, and U.S. Senator Elizabeth Warren (D-Massachusetts). Our Revolution, the progressive political group aligned with U.S. Senator Bernie Sanders (I-Vermont), is also backing her bid.

In a recent email to its members, the group noted, "Jamie has a real shot to remove one of the biggest roadblocks to progress in Congress."

While Schrader, 70, a farmer who had worked as a veterinarian for more than 30 years before entering Congress, doesn't list his endorsements on his campaign website, he has been touting the support he has received via his Twitter profile. Among the groups endorsing him are the Oregon State Fire Fighters Council and the Oregon Nurseries' PAC.

McLeod-Skinner, 54, will be receiving an assist this weekend from various political leaders and friends of hers in the Bay Area. She served for eight years on the South Bay City Council in the 2000s.

In addition to several private fundraisers in the East Bay and in Silicon Valley hosted by friends of hers, McLeod-Skinner is holding a public event from noon to 2 p.m. Saturday, April 9, at the Backyard Bayou Cajun seafood restaurant in San Jose. Among the co-hosts are San Jose Mayor Sam Liccardo, former San Jose Vice Mayor Madison Nguyen, Santa Clara County Supervisor Otto Lee, and former supervisors Rod Diridon Sr., and Ken Yeager, a gay man who is the only LGBTQ person to have served on the countywide board.

"She left a real imprint on LGBTQ rights in the city of Santa Clara. We have missed her since she went to Oregon," said Yeager, executive director of the BAYMEC Community Foundation. "I am really very excited about the prospects of her winning a seat in Congress and how wonderful that is going to be to have another lesbian elected to Congress."

McLeod-Skinner is the second out-of-state LGBTQ candidate to descend on the Bay Area this week in order to fundraise for their campaign. As the B.A.R.'s online Political Notes column reported Monday, April 4, Jim Obergefell is kicking off his efforts to raise funds for his Ohio statehouse bid this year with an April 6 fundraiser in San Francisco's LGBTQ Castro district.

The Buckeye State native has long had ties to the region due to his involvement in wine label Equality Wines, which has a downtown tasting room in the LGBTQ vacation destination of Guerneville. Obergefell gained national stature being the lead plaintiff in the federal court case that secured same-sex marriage rights in 2015. He is now trying to oust from office Republican Ohio State Representative D.J. Swearingen.

With candidates from out-of-state often criticized for fundraising in the liberal Bay Area, McLeod-Skinner said she has no qualms about returning to the region she called home to seek support for her campaign coffers.

"We are looking forward to it. I am really excited about it," she said. "It will be great to reconnect with folks in the Bay Area."

Her campaign has been aggressive in courting donors, emailing backers last month with a goal of raising another $26,000 by March 31. According to the website Open Secrets, McLeod-Skinner has so far reported raising $231,446. Meanwhile, it reported that Schrader has raised more than $1.4 million for his campaign.

Expected to attend her various local fundraisers, including private ones in Santa Clara and Oakland, are friends McLeod-Skinner met through her government work, business ties, and classmates from the law school at the University of Oregon, where she graduated in 2016, who now reside in the Bay Area.

They are people, she said, "who know me and know my work and just want to invest in good governance, and also environmental protections, and support all the work I have done for years in the Bay Area and here in Oregon."

This is McLeod-Skinner's second run for a congressional seat, having lost in 2018 against then-congressmember Greg Walden (R-Hood River) for Oregon's expansive 2nd Congressional District seat. He had held it since 1999 and opted not to seek reelection two years ago.

McLeod-Skinner won election in July 2019 to an at-large seat on the Jefferson County Education Service District but came up short in her 2020 bid to become Oregon's secretary of state. With the decennial redistricting process incorporating parts of the state's former 2nd House District into the new 5th District, McLeod-Skinner jumped into the race for the seat since it covers much of the areas where she ran for office in the past.

Her wife, Cass Skinner, comes from a multi-generational ranching family in eastern Oregon's Jordan Valley. The couple resides in Terrebonne just outside the southeastern border of the new 5th Congressional District.

McLeod-Skinner, who has four children, had first moved to southern Oregon as a child. After graduating from Cornell University McLeod-Skinner worked for the International Rescue Committee in the late 1990s, first in Bosnia and Herzegovina then in Kosovo.

The agency in 1998 sent her to work in its San Jose office; she then took a job with the city of Sunnyvale. In 2008 she went to work for the Santa Clara Valley Water District as an environmental planner.

McLeod-Skinner moved to Oregon in the early 2010s to attend law school. She was hired as the city manager of Phoenix in late 2016 but was fired the following year after a local election brought new leadership to the town's City Council.

Last year she served as interim city manager in Talent, overseeing its recovery from a wildfire that tore through it over Labor Day weekend in 2020. Since November she has worked part-time for Oregon's Department of Human Services in its emergency management unit.

Following her defeat in the primary race for secretary of state, McLeod-Skinner co-founded Team Jamie for Oregon and launched a political action committee under that name to help elect progressives and people of color in rural districts of the state.

To RSVP for McLeod-Skinner's April 9 fundraiser, where individuals are asked to donate at least $100 to attend, email sam@jamiefororegon.com