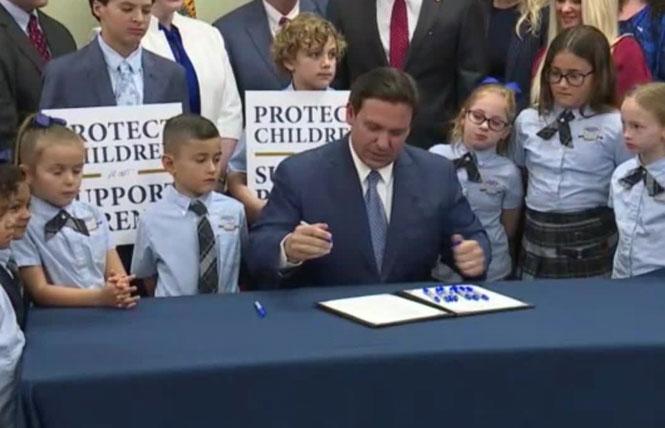 Governor Ron DeSantis signed the "Don't Say Gay" bill into law March 28 at a charter school that would be exempt from it. Photo: Courtesy WFTS

A court challenge is almost certain for Florida's "Don't Say Gay" bill that Republican Governor and potential 2024 presidential candidate Ron DeSantis signed March 28, although that doesn't mean the law will be thrown out anytime soon. The Parental Rights in Education bill, or House Bill 1557, will not allow classroom instruction about sexual orientation and gender identity in grades K-3, while "age-appropriate" teaching would be allowed in older grades — though it is not clear what is considered "age-appropriate." The bill would also permit parents to sue schools or teachers who violate the legislation; it affects public schools and goes into effect on July 1.

Equality Florida, the statewide LGBTQ rights organization in the Sunshine State, noted that DeSantis picked a dubious venue in which to sign the bill. "Governor DeSantis chose Classical Preparatory school in Spring Hill, a charter school exempt from the bill's impacts, as the backdrop for signing the legislation that has provoked international condemnation," the organization stated in a news release. "Governor Ron DeSantis signed the 'Don't Say Gay' bill in the most cowardly way possible today," Equality Florida Executive Director Nadine Smith stated. "He hid his agenda from the media and the public until the last moment, skulking onto a charter school campus that is exempt from the law and away from students who would protest his presence."

There are problems with the new law. As Vox reports, it does not define key terms like "age appropriate" or "developmentally appropriate." It doesn't even define the term "classroom instruction." "The insidiousness of Florida's law is that teachers who won't understand how to comply with the new law are likely to overcensor their speech in order to protect themselves from being accused of violating the law," the site noted.

The American Civil Liberties Union of Florida wasted no time in stating that the law is unconstitutional because students have a First Amendment right to receive information at school, free of political or partisan censorship. Vox's analysis, too, states that the new law is unconstitutional because of its vagueness. It cites a 1967 U.S. Supreme Court case, Keyishian v. Board of Regents, in which the justices "struck down a web of New York laws intended to prevent communists and other 'subversives' from becoming teachers or professors — one statute, which barred employment of anyone who 'advises or teaches the doctrine' of forceful overthrow of government was so broadly worded that it could potentially have forbidden state-run universities from teaching the Declaration of Independence."

The other troubling aspect of the Florida law is that it allows parents to bring private lawsuits against schools that violate the ban. That's similar to the Texas abortion law that allows private citizens to sue anyone connected with helping a person obtain an abortion. (We're seeing the liberal counterpart of this in California, where a bill is making its way through the Legislature that would allow private citizens to sue members of the gun industry.)

While it's expected that the law will face a court challenge, the outcome is far from certain. For one thing, Florida courts or the state education department might remedy the vagueness by providing definitions in the law. Vox also points out that the Florida Supreme Court is stacked with Republican justices, including three appointed by DeSantis. Even if the law is reworked to provide definitions of "age-appropriate" and "developmentally appropriate," it will still be horrible for LGBTQ students and families. Teachers are in a difficult situation and that's where the erasure of LGBTQ history and culture is most effective. Afraid of being sued or otherwise disciplined, teachers will possibly just stop talking about LGBTQ issues, no matter the grade level. That's alarming but not surprising.

This strategy was probably part of DeSantis and Republican lawmakers' calculations all along: pass an ill-defined bill and let the courts and bureaucrats hash it out. Meanwhile, public school curriculum will be dumbed-down to erase LGBTQ historical figures and those involved in present day events. And worst of all, LGBTQ children will become more isolated, unsupported, and stigmatized. The students ultimately lose, and that's the tragedy here.