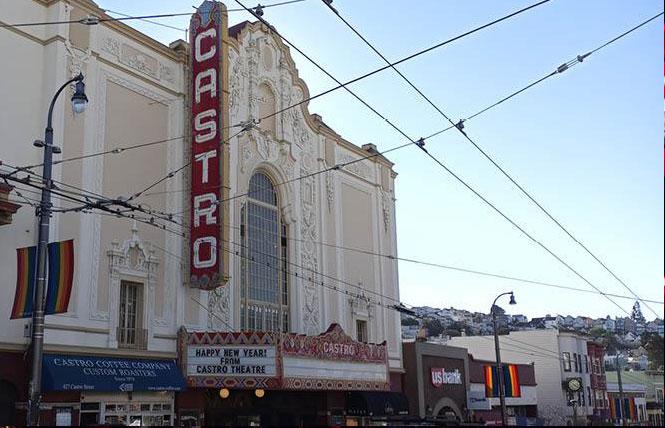 Get people talking about movie theaters, especially old film palaces, and inevitably the conversation becomes nostalgic. Get them talking about the Castro Theatre and the conversation is tinged with more than nostalgia, people remember growth. Their growth. The Castro Theatre is, for many LGBTQ people with ties to San Francisco, the place they discovered their tribe.

The announcement earlier this year that the Castro Theatre would continue business under the new management of Another Planet Entertainment has left many LGBTQ movie fans apprehensive about what direction the historic, 100-year-old theater might go.

"As a baby gay, I was introduced to both 'All About Eve' and 'The Women' as a double feature," Jim Gibson, who moved to San Francisco 32 years ago, wrote in a Facebook message to the Bay Area Reporter. "I learned so much that night, but not the dialogue of either movie. The theater was packed and there was a cacophony of sound filling the theater as every member of that audience was reciting every line of both films and it was glorious. There was so much joy and a sense of community. It was a glimpse into a world that I was just discovering. I will never forget that night. Many years later, I now know every line naturally."

Others saw themselves represented, for the first time, on the movie screen at the Castro Theatre.

"Every time we walked through the neighborhood, we would stop and check out the posters and upcoming shows," Bacha Jan, a gay man now living in Tucson, Arizona, wrote via a Facebook message. "Cuz they were our shows. I didn't get to see my life on the big screen the way my straight classmates took for granted except for places like here."

In a sense, the growth of the theater as an icon of LGBTQ San Francisco paralleled the growth and changes in the community itself. From the early 1960s, when gay men began to arrive in Eureka Valley and the theater was little more than "a huge crumbling movie palace, an ?impressive if decaying building with the same movies as in other neighborhoods" in the words of queer historian Gerard Koskovich, to the 1970s, when the neighborhood began to assume its identity as the Castro.

When future event producer Marc Huestis arrived in San Francisco in 1975, not much had changed, but two significant events would soon shape the theater for years to come: the release of the gay-produced documentary "Word Is Out" in 1977, and one year later, the beginning of the installation of the Mighty Wurlitzer organ.

Whereas "Word is Out" put the Castro on the map as a center for gay filmmaking, the Wurlitzer brought silent films, as well as countless other repertory films, to an increasingly LGBTQ audience eager to watch them.

"That's really when we can say the Castro began to make its mark," said Koskovich, who lives in San Francisco. Where gay people can go and find themselves in a public place with 1,200 other gay people, he said, that´s really an important moment. As the theater was also the largest facility of its type in the immediate vicinity, and affordable to rent, it came to assume a crucial role in the life of the neighborhood.

It was, after all, at a showing of "East of Eden," starring James Dean and Julie Harris, that event producer and filmmaker Huestis decided to come out to his father. Over the following decades, Huestis, who now lives in Palm Springs, would launch his own film premieres, as well as some 25 live shows, at the theater. It's that point that gives him pause as he considers the physical changes planned for the theater by its new managers.

The stage isn't big enough for the performances APE wants to bring in, Huestis said, and plans to remove the stairs leading up from the seats along either side of the stage would make it impossible for stars and performers to make "triumphant" entrances onto the stage. Even more worrisome to Koskovich is the loss of a reasonably inexpensive place to stage shows or hold community events, such as memorial services.

"The amount of money APE is investing into the space," Koskovich said, "they will engage in massive gentrification of the space, and it will be lost to small budget film producers and drag performers."

Those same changes make "this less like a movie theater," said Tina Aguirre, a genderqueer Latinx person who is the manager of the Castro LGBTQ Cultural District, "and any changes needed to make it more like a movie theater experience - if there are film producers that want to change the seating back to what would normally be a cinematic experience - would probably fall on community organizations to carry those expenses, and that would be economically unfeasible."

Despite his fond memories of the place, Huestis is neutral about the impending changes, adding "the theater is unsustainable as it is now." Even before the pandemic, sales for his own events had been dwindling and he wasn't making a profit on performances that cost $20,000 to produce.

"If the price gets raised, it just won't be worth it," Huestis said.

David Perry, a gay man who is the spokesperson for APE's work at the Castro, insisted that the entertainment producer is very conscious of the public's concerns and is, in fact, negotiating with stakeholders for events in the upcoming years.

"Another Planet is well aware of what an icon the Castro Theatre is to LGBTQ communities," Perry said in a phone interview with the B.A.R.

Concerns about the size of the stage, for example, have been addressed with plans for a raisable movie screen, that would open up even more of the stage for live performances. And the screen itself is also going to be replaced. "It's in very bad shape," Perry observed.

And the organ, beloved by anyone who's ever heard David Hegarty play "San Francisco" on it just before the feature presentation, is safe, said Perry.

"There has always been an organ in the Castro Theatre, and there will always be an organ at the Castro Theatre," Perry said, adding that Hegarty has been involved in efforts to replace the Mighty Wurlitzer the theater has used for several years, and which he actually owns, with a fully restored Wurlitzer/Kimball theater pipe organ, which will then be part of the theater's infrastructure. Hegarty's website also contained that information.

Despite what might seem like foot dragging to those watching the changes at the Castro with concern, said Perry, the reality is that APE is deeply involved in cleaning the cinema to get it in shape for Frameline46 LGBTQ+ Film Festival June 16-22. And APE is still awaiting its first hearing with the city's planning department after submitting plans earlier in March, said Perry. The pandemic is still a factor and has caused many of the procedural delays they're currently dealing with.

The Castro Theatre is in safe hands, said Perry.

Fans of the movie palace hope so.

"My god, with 32 years of history with the theater there are so many memories flooding back," said Gibson. "So many important moments, so many first viewings, so many performances. Hearing 'San Francisco' on the Mighty Wurlitzer has made me cry for well over a decade now."