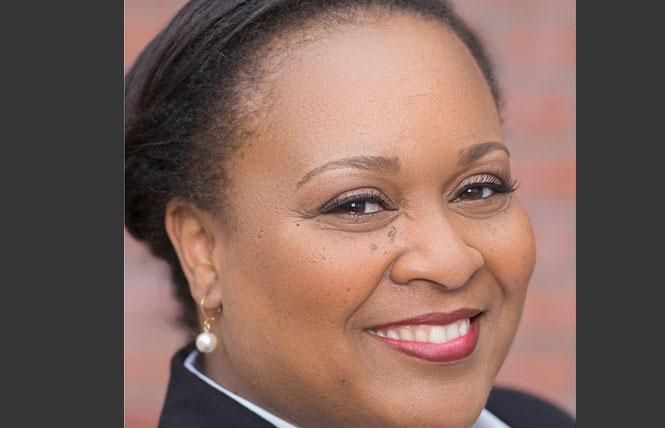 Across the country transgender youth and their parents are coming under attack by Republican elected officials. Even in California, anti-LGBTQ groups continue to rail against legislative attempts to bolster the rights of such children and their families.

Missing from the debates in Sacramento has been the voice of a state legislator whose child is transgender or nonbinary. According to LGBTQ advocates and lawmakers no such parent has served in the state Legislature.

But that is set to change with the expected election next week of Suisun City Mayor Lori Wilson to the open 11th Assembly District seat that straddles Solano and Contra Costa counties. She and her husband, Chavares, are the parents of a transgender son now in college.

"It seems statistically impossible to me," Wilson told the Bay Area Reporter about her becoming the first such legislator, noting there may have been a parent who wasn't public about having a trans child.

Nonetheless, she acknowledged that her joining the Legislature comes at "a pivotal time" and she pledged to be "a very strong ally" to the LGBTQ community. Because she is not LGBTQ herself, Wilson will be ineligible to join the Legislative LGBTQ Caucus.

"Right now there are so many unprecedented attacks when I think about reproductive freedom and the same thing with LGBTQ rights. It is crazy we have made so many gains in these spaces and now to see them under attack," she said. "In some states in our nation we are going backward. It saddens me."

Democratic former assemblymember Jim Frazier resigned in order to seek work in the transportation sector and endorsed Wilson to succeed him. She is facing little opposition in the special election being held April 5 to elect someone to serve out the remainder of Frazier's term through early December.

Wilson's name is the sole one listed on the ballot, while Republican Erik Elness did qualify as a write-in candidate. Thus, Wilson is practically assured of being declared the winner in the race next Tuesday and is expected to be sworn into office soon thereafter.

It will give her a leg up as the incumbent in the contest for a full two-year term on the June primary ballot then the November general election race where she will be competing against Army veteran Jenny Leilani Callison, an independent who is a staff member for the California State Assembly Military and Veterans Affairs Committee. Because the filing deadline has passed, Wilson will not be listed as a sitting assemblymember on either ballot. Plus, under redistricting, the Assembly district is losing most of its areas in Contra Costa County other than Oakley and gaining all of Solano County.

Wilson, first elected to a City Council seat in 2012, was elected mayor of her city in 2018, becoming the first Black female mayor to serve in Solano County. As the mother of a transgender son, Wilson has made it a priority during her mayoralty to celebrate Suisun City's LGBTQ community, as she explained to the B.A.R. in 2020 for a story about how all Solano County cities but Dixon that year were marking Pride Month in June.

Because it doesn't fly commemorative flags on the flagpole in front of its City Hall, Wilson had installed a rainbow flag display inside the building near the entrance. As long as she served as mayor, it would remain in place, she had pledged to the B.A.R.

Her son, who at the time was not fully out and asked that his name be withheld, had told the B.A.R. his hometown is accepting of LGBTQ people almost to a fault.

"Honestly, everybody has been really so great and supportive around here when it comes to that, it wasn't as big of a deal as I think it should be," he had said of the rainbow flag display his mother installed in City Hall.

He continues to prefer to remain in the background, Wilson said, adding her son is thankful for those who are fighting so he can be himself. They did discuss Wilson taking on a more visible role as a member of the Assembly who will be looked upon to lead on trans issues.

"We as political leaders have to do what we can to protect the LGBT community as well as protect the right for everyone to exist no matter who you are," said Wilson. "It saddens me to see people are attacking people just for existing."

Jonathan Cook, executive director of the Solano Pride Center, the county's LGBTQ community center located in Fairfield, told the B.A.R. that Wilson has not only been "a good advocate" for the nonprofit facility but for the LGBTQ community in general. Her now serving in the state Legislature will be impactful for other parents of trans and nonbinary children, said Cook, particularly at this moment in time when Florida's governor on Monday signed into law legislation that restricts teaching about LGBTQ issues in kindergarten through third grade classes.

"The increasing vitriol present at school board meetings and really going after trans and nonbinary students, it is important for folks with that level of knowledge, compassion, and lived experience to advocate for our trans youth and community at large at the state level," said Cook.

Tiffany Woods, a married trans mother of three teenagers who co-chairs the California Democratic Party LGBTQ Caucus, told the B.A.R. she doesn't know Wilson personally but looks forward to seeing her serving in the Legislature.

Her "lived experience, that first-hand knowledge" as a parent of a transgender child, said Woods, "it is extremely impactful and informed."

A lawmaker who can speak from personal experience during debates on bills advancing rights for trans youth and their families can have a powerful impact on their legislative colleagues and the public, noted Woods, pointing to the reaction Democratic former congressmember Mike Honda of San Jose received when he came out about being the grandfather of a trans granddaughter in 2015.

"It really speaks to the political as personal, right. We know that," said Woods. "It changes the conversation and the narrative."

For Wilson to be able to talk about her own parental experience "that is going to be huge and make a big difference," added Woods.

Web Extra: For more queer political news, be sure to check http://www.ebar.com Monday mornings for Political Notes, the notebook's online companion. This week's column reported on the effort to honor the late gay civil rights leader Bayard Rustin with a U.S. postal stamp.