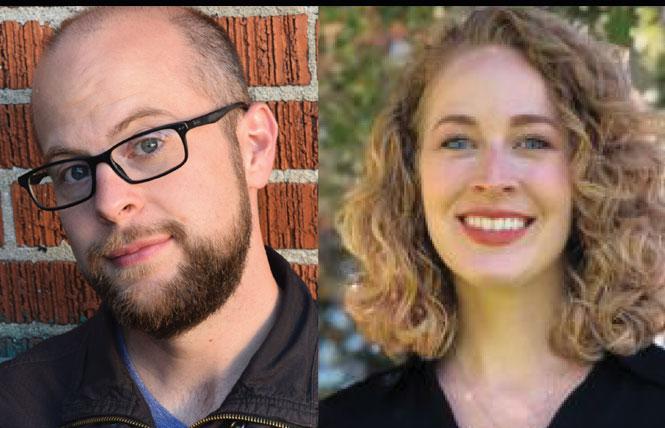 The search to find a permanent leader for the GLBT Historical Society in San Francisco is formally underway. It comes as the LGBTQ institution is working with city officials to find it a site to build a new, larger museum and archival research center.

After Terry Beswick resigned in September as executive director, the nonprofit named staffers Kelsi Evans and Andrew Shaffer as its interim co-executive directors. Evans had been hired as director of the Dr. John P. De Cecco Archives & Special Collections with the society, while Shaffer was directing the society's outreach, media, and fundraising programs.

The society has engaged the firm Brakeley Search to help it conduct its search for a new executive director. It posted a six-page position specification March 20 online as it ramps up its hiring process.

"We started accepting applications this month in late March," Shaffer, a gay man, told the Bay Area Reporter in a recent phone interview. "We are hoping to find someone fairly quickly if they can come in and check all of our boxes. We know we are looking for a unique person, so it might take a little bit longer."

In addition to helming the efforts to construct a new museum and archival center, the next executive director needs to be adept at fundraising. The COVID-19 pandemic, which led to the closure of its current museum in a Castro district storefront and downtown archive space, impacted the historical society's revenue streams the last two years.

It canceled moving to a larger vacant retail space in the city's LGBTQ neighborhood at the start of the health crisis in 2020. A capital campaign for its planned new museum was also put on hold due to the pandemic.

"We want someone who understands and cares about the work we do and also has really strong leadership skills and fundraising skills. The intention behind this position is to help us grow significantly over the next few years," said Shaffer, who doesn't plan to apply for the position.

Evans, a straight ally, also isn't planning to apply for the position, as she told the B.A.R. she is "happy" overseeing the archives.

Museum plans
With its museum housed in a leased storefront of limited size, the historical society for some years has sought to find a larger, more permanent location, preferably in the Castro. Mayor London Breed budgeted $12 million in the city's fiscal year 2021-2022 budget toward the purchase of a site where the society can build what is billed as the first large-scale, freestanding LGBTQ history museum in the country.

"It is a significant part, working not only with the city but private funders, corporate funders, all sorts of different people to find and program a site. Those two things overlap but both take a lot of energy," said Shaffer in terms of two of the main tasks the new executive director will oversee.

The institution has also worked the last two years to expand its reach online with both its museum and archives needing to be shuttered for prolonged stretches due to COVID restrictions local and state officials imposed. Those virtual efforts will continue under the new executive director, noted Shaffer.

"The last couple of years we realized we have a large audience outside of the Bay Area and outside the U.S.," he noted. "Especially in times like now, where people are being told they can't say gay in Florida and Texas has called in parents of transgender children for child abuse, just for acknowledging your child's existence, we have a lot more people interested in learning about LGBTQ history broadly."

As it happens a Florida LGBTQ historical organization is also looking to hire a new person to lead it. In February, the Stonewall National Museum & Archives in Fort Lauderdale announced the launch of its search for a new executive director. It engaged executive search firm Aspen Leadership Group to assist it in filling the position.

The LGBTQ historical institution's current executive director, Hunter O'Hanian, had announced in November his intention to resign. He will remain in the position until his replacement is found.

"I've found my time working with the Stonewall collections to be exhilarating," stated O'Hanian. "So much gay history in one place. I look forward to learning how the collections continue to diversify and grow under the next leadership!"

Formerly deputy executive director and chief learning officer at Ohio History Connection, Garcia and his husband decided to relocate to New York City in order for him to help oversee the museum affiliated with the New-York Historical Society. Its building is under construction and set to open in 2024.