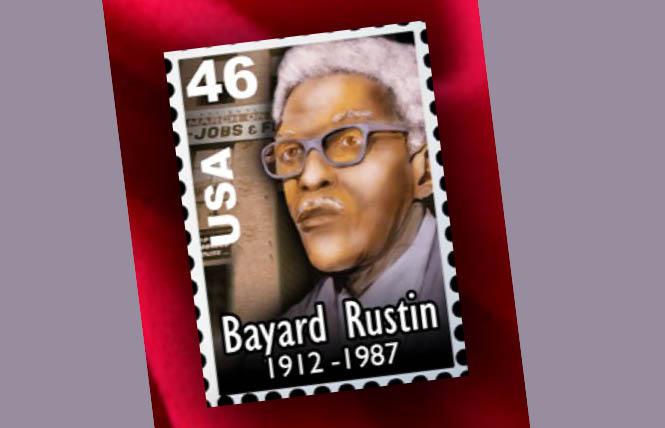 A national Black LGBTQ advocacy group is renewing the call for the U.S. Postal Service to honor deceased gay Black civil rights leader Bayard Rustin with a stamp. It is also calling on Congress to pass legislation that would require the postal agency to issue such postage.

It has been eight years since the International Court System and the National LGBTQ Task Force launched a campaign to create a commemorative U.S. postage stamp in honor of Rustin, who helped organize the 1963 March on Washington and was a top adviser to the late Reverend Dr. Martin Luther King Jr. Rustin died August 24, 1987, at the age of 75.

"It is critical that we honor Bayard Rustin's work in the civil rights movement," stated David Johns, executive director of the Black LGBTQ+/SGL, short for same-gender loving, civil rights organization. "It is our firm belief that ensuring the contributions of Black trans, queer, and nonbinary/nonconforming members of our community are recognized while also implementing bills like the John Lewis Voting Rights Advancement Act and the Equality Act will advance the legacy of Brother Bayard and the modern civil rights movement into the next generation. But to honor Bayard specifically, we urge Congress to pass the Bayard Rustin Stamp Act and make him a forever figure in our country."

In a February 22, 2019, letter to the postal service's Citizens' Stamp Advisory Committee, which recommends ideas for the commemorative stamps that the agency releases each year, Norton had announced her plan to introduce in the House legislation requiring creation of the Rustin stamp. Her correspondence was timed to that year's observance of Black History Month.

"Rustin worked with Dr. Martin Luther King Jr., in developing and promoting nonviolent strategies in the struggle for equality," wrote Norton. "Perhaps most importantly, he was the chief organizer of the 1963 March on Washington, D.C., a demonstration in which hundreds of thousands of people turned out in favor of expanded civil rights for African Americans, the largest demonstration ever held at the time."

Last summer, on August 24, gay Black Congressmembers Mondaire Jones and Ritchie Torres, both Democrats from New York, joined Norton in introducing her federal bill about the Rustin stamp. It is currently awaiting a hearing before the House Committee on Oversight and Reform.

"Bayard Rustin was a leader in the movement for civil rights and a champion for LGBTQ+ justice. But for far too long, he has been denied the recognition he deserves," stated Jones. "Bayard's example, as an openly gay, Black man, taught me and countless others the power of living as your authentic self and fighting for justice."

Torres added that the issuance of a commemorative stamp would honor Rustin's "legacy and ensure that all Americans are aware of his commitment to civil rights."

James McKean, a spokesperson for the postal service, told the B.A.R. March 28 after this article was initially published online that "Bayard Rustin is one of the numerous subjects currently under consideration for a future postage stamp." He noted that more than 30,000 postage stamp suggestions are annually submitted to the federal agency.

Over the years a number of California leaders have backed the LGBTQ task force and International Court's effort to honor Rustin via a postage stamp, from members of the West Hollywood City Council to gay San Diego Mayor Todd Gloria. Back in 2019 California state legislators passed a resolution written by Assemblymember Wendy Carrillo (D-Los Angeles) in support of the Rustin stamp effort and also called on the U.S. Postal Service to issue it.

In 2020, at the urging of then-assemblymember Shirley Weber (D-San Diego), now secretary of state, and gay state Senator Scott Wiener (D-San Francisco), California Governor Gavin Newsom posthumously pardoned Rustin. In 1953 he had been arrested in Pasadena, California on vagrancy charges leading to Rustin spending 50 days in Los Angeles County Jail and being ordered to register as a sex offender.

Newsom's doing so was aimed at removing a possible stumbling block for the issuance of a Rustin stamp. The first known stamp to honor an LGBTQ American was issued in 2014 on behalf of the late gay San Francisco supervisor Harvey Milk.

Other stamps
A forever stamp honoring the late astronaut Sally Ride, who posthumously came out as a lesbian at the time of her death in 2012, was issued May 23, 2018. This past February the postal service on its newest Black Heritage Forever Stamp featured the late Edmonia Lewis. The first African American and Native American sculptor to earn international recognition in the Western art world, Lewis moved around lesbian art circles in Rome in the late 1860s.

Known as the Queen Mother I of the Americas and Nicole the Great within the Imperial Court System, Murray Ramirez leads the philanthropic organization within the drag community that Sarria launched 56 years ago in San Francisco. Also a longtime San Diego city commissioner and columnist for local LGBTQ newspapers covering the Southern California city, Murray Ramirez had initiated the effort in 2014 calling for the creation of a Rustin postage stamp.

"Our 80 city chapters have been writing letters and lobbying, just as we did in our successful campaign that resulted in a U.S. Harvey Milk forever stamp, and hope the new focus and support of our efforts by the NBJC and members of Congress will finally result in the long overdue issuance of this stamp honoring a true Black and LGBTQ American civil rights icon," Murray Ramirez, referring to the court's local chapters, told the B.A.R.

After the postal services' stamp advisory panel makes its recommendations, the U.S. postmaster general makes a final determination on which commemorative stamps will be issued. According to the committee's website, ideas for stamp subjects should be received at least three or more years prior to the proposed issuance year.

Only deceased individuals are eligible to be featured on a stamp, and they can't be honored in such a manner until three years following their death. The approval process for new stamps usually takes about three years.

If the committee decides not to recommend a subject for issuance as a stamp, the proposal can be submitted again for reconsideration following a three-year interval, according to its stamp selection process rules. As its website notes, "The Postal Service will honor extraordinary and enduring contributions to American society, history, culture, or environment."

To learn more about the latest efforts in support of a Rustin stamp, click here.

Bugs Bunny US stamps first to depict images of drag
Sign up!