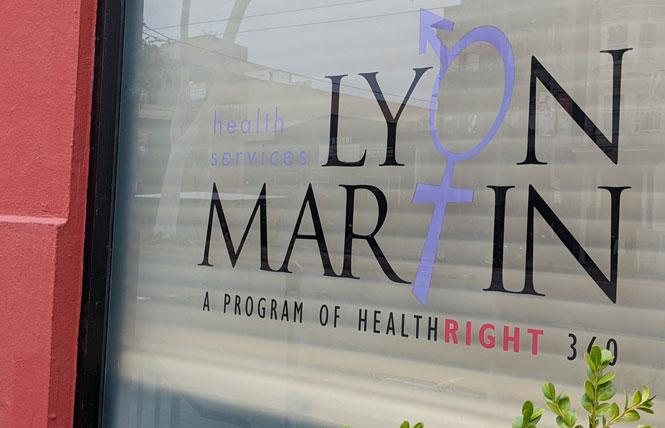 Lyon-Martin Health Services has changed its name to Lyon-Martin Community Health and is now independent from HealthRIGHT 360. Photo: Eric Burkett

Almost two years to the day when then-named Lyon-Martin Health Services announced a massive potential cut in its services, the 43-year-old clinic for women and transgender people is striking back out on its own with a new name, severing a seven-year relationship with a statewide chain of medical centers.

Merged in 2015 with HealthRIGHT 360, a network of medical and substance-abuse counseling clinics that now has branches in 13 Bay Area and Southern California counties, Lyon-Martin leaders had hoped the merger would ease its ongoing financial instability. In 2011, just four years before the merger, the clinic was nearly shut down after its board announced the organization was nearly $1 million in debt. While HealthRIGHT 360 did bring in important logistical and structural changes, the hoped-for financial stability never panned out.

In 2017, HealthRIGHT 360 also acquired the Women's Community Clinic, and eventually sought to merge the services of both clinics into a single location. That effort, however, came to a halt in 2020 with the COVID outbreak and subsequent lockdown. Despite its efforts, HealthRIGHT 360 was never able to turn Lyon-Martin's financial fortunes around.

"Lyon-Martin and Women's Community Clinic experienced very significant financial losses over a five-year period," stated Vitka Eisen, a lesbian who is HealthRIGHT 360's president and chief executive officer, in an email to the Bay Area Reporter.

In fact, the losses were so bad, Lyon-Martin was facing a cutback of up to 90% of its services, as reported in the B.A.R. in March 2020, just a week before the COVID lockdown.

"At that time, the staff of Lyon-Martin and Women's Community Clinic joined together with our labor partner [Service Employees International Union] Local 1021 to advocate for additional financial support from the San Francisco Department of Public Health," Eisen stated. "This was done to forestall reducing community health capacity during the pandemic — which would have been the result of the consolidated model — and to buy some time for key clinic stakeholders to determine the best path forward to support Lyon-Martin and Women's Community Clinic's enduring sustainability."

Over the past year, Eisen added, staff and key stakeholders of both clinics determined that separating from HealthRIGHT 360 would provide Lyon-Martin a better opportunity to define its services and brand, and allow it to more successfully pursue funding. Now renamed Lyon-Martin Community Health Services, the clinic formally opened as an independent facility March 16.

These changes now provide the clinic and its staff an opportunity to make Lyon-Martin even more responsive to the needs of its transgender patients, said JM Jaffe, a transgender person who is the clinic's CEO, in a phone interview.

Now, Lyon-Martin is hiring more staff and increasing its service offerings to include specialty care such as speech therapy and hair removal, services that — in the past — might have had to be referred out to clinics that weren't as trans-supportive as Lyon-Martin. The clinic sees some 3,000 patients each year, primarily from San Francisco, as well as Oakland, with a fair number coming from other countries where finding supportive trans care is nearly impossible, Jaffe said.

According to Lyon-Martin, a majority of its clients come from the Tenderloin and Mission districts in San Francisco. Currently located at 1735 Mission Street, it is subleasing from HealthRIGHT 360, and Jaffe expects the clinic to remain there for the foreseeable future.

"We've been expanding and hiring over the past two years," said Jaffe, who has been with the clinic in various capacities for 12 years. "I don't know that today is much different from yesterday but we are continuing to hire people from our own community."

Lyon-Martin's staff now stands at more than 70% trans, they said, with six out of seven of its medical providers trans, and seven out of nine mental health providers trans. According to a news release, 100% of the leadership at Lyon-Martin is now trans.

With its independence, Lyon-Martin will also see more funding from the city go toward its more than $5 million budget. More than half of that, however, comes from insurance reimbursements, and Jaffe is at work to make the clinic a federally qualified health center, which would allow it to claim higher reimbursements from Medi-Cal and Medicaid.

"Lyon-Martin is one of our essential queer institutions," he stated in an email to the B.A.R., "and it was my privilege to be able to work with them during the last city budget process to secure $2.4 million over two years to help stabilize the clinic during their separation from HealthRight 360. This funding was crucial to help keep the doors open, and beyond that, I understand that Lyon-Martin has been able to expand their programming and return to serving clients at their full capacity. I was glad we could be helpful in supporting Lyon-Martin through this difficult period. "

Beyond that, there's the issue of where the clinic will eventually end up. Moving would allow Lyon-Martin to expand not only in physical space, but also in its offerings to its clients. The city has already allocated $750,000 to move and renovate a new location if one can be found.

"It's been really important to us to provide as much care as possible in a way that they feel safe and seen," said Jaffe.

Lyon-Martin remains open, but future is uncertain
Sign up!