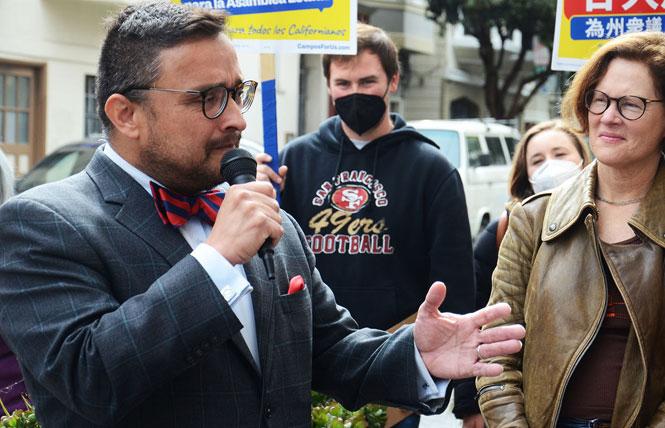 He may be the underdog in the race for the vacant 17th Assembly District seat, but former supervisor David Campos knows what it's like to fight for causes he believes in. In this case, he's fighting for not only the LGBTQ community — Campos is a gay Latino man — but for all of his would-be constituents in what has become in these closing weeks a slugfest between him and his opponent, District 6 Supervisor Matt Haney. We wish that wasn't happening, but negative attacks work, research has found, and candidates can't seem to help themselves.

During last month's primary, Campos and Haney were the top two finishers, resulting in their square off in the special general election April 19. Mail-in ballots have been sent out and early voting has begun at San Francisco City Hall. The winner gets to finish the term — through December — of former assemblymember David Chiu, who resigned last November when he became San Francisco's first Asian American city attorney. The 17th Assembly District covers the eastern side of San Francisco, including the Castro LGBTQ neighborhood, the Mission, Bernal Heights, South of Market, North Beach, Chinatown, Bayview, and the Tenderloin.

Both progressive candidates hold similar positions on a number of issues. We endorsed Campos ahead of the primary because we feel that he has always looked out for and advocated on behalf of our community. His lived experience is one that is familiar for many immigrants in this country; he was undocumented when he and his family came to the U.S. from Guatemala as a child. Since then, he became an attorney, elected official, and is now vice chair of the California Democratic Party. A stint as a deputy county executive in Santa Clara County included overseeing several departments, including the Office of LGBTQ Affairs. Campos is now on leave as chief of staff to San Francisco District Attorney Chesa Boudin, who faces a recall in June.

A major issue in the race is access to health care and Campos supports Medicare For All. A similar effort to create a single-payer system in California, CalCare, went down in flames in February without even getting a vote. That signals to us that there are not enough progressive lawmakers in the Legislature — Assemblymember Ash Kalra (D-San Jose), who carried Assembly Bill 1400, told supporters on a Zoom call that it was short of votes "in the double digits;" it would have needed 41 votes to pass. Credit opposition from the powerful insurance industry and California Chamber of Commerce, which called it a "job killer." Campos would have supported the bill. "I will push for Medicare for All," he said last week when he received the endorsement of Thea Selby, who finished fourth in the primary race. "People have actually died because of no access to health care."

Campos also supports more housing in the state and he supports gay state Senator Scott Wiener's (D-San Francisco) legislation that would allow local governments to upzone parcels for residential housing if they are near transit or an urban infill site. If elected, he said that he would continue to be a champion of affordable housing and transit. He wants to call for a statewide bond measure to fund affordable housing.

Last week Campos received criticism from Haney and others over a comment he made at a volunteer mobilization effort where he said, "There is some, you know, connection to Ukraine because we are fighting and running like Ukrainians. We are fighting against the odds, right, in the primary." While it may have been a poor choice of words, Campos said that what he meant was that he's fighting like an underdog in this race, and about that, he's right. "Let me get this straight," Campos tweeted. "My opponent's supporters are attacking us because I expressed admiration for people fighting for democracy against a regime backed by oligarchs? I would never trivialize the suffering taking place in Ukraine." Campos' family twice fled civil war in Guatemala.

Campos has regional experience having served on the Metropolitan Transportation Commission and has been endorsed by six members of the Board of Supervisors. We're endorsing Campos not just because he is gay, although that aspect of him is important, but because he has the experience, qualifications, and commitment to progressive solutions for addressing the issues we face. Campos told us that he would be "relentless" in fighting for the LGBTQ community — that's what we need, as we editorialized earlier. The 17th Assembly District will benefit from having Campos as the representative in Sacramento. He will bring his unique perspective and fresh ideas to tackle some of the state's biggest challenges.

Campos finished about 700 votes behind Haney in the primary. This runoff will see fewer voters, and it's all about turnout between now and April 19. It's imperative that Campos' supporters mail in those ballots now or show up in person on election day.

Editorial: The copycats are out in force
Sign up!