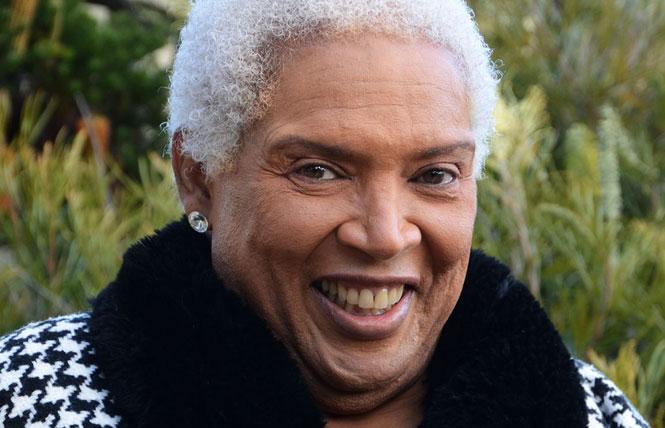 Persistence has paid off for transgender nurse Veronika Fimbres, as the Green Party member has qualified to appear on the June 7 primary ballot as a candidate for California insurance commissioner. She is the first known transgender statewide office seeker to make it onto a general election ballot in California, as well as the first person living with HIV to do so.

Twice before she had attempted to qualify as a candidate, first in the 2018 gubernatorial race. She failed to raise enough money to cover the filing fee, however, so her name was left off the primary ballot that March. Fimbres was certified as a write-in candidate for the race, which was handily won by then-lieutenant governor Gavin Newsom.

The San Francisco resident had tried to qualify as a candidate in the failed recall attempt of Newsom last year. But Fimbres did not turn in the required income tax forms and was rejected for the ballot, which did include transgender reality TV star Caitlyn Jenner, a Republican.

This time around Fimbres was successful in raising the funds required to be a candidate for the state's insurance czar. She is one of several people challenging gay Insurance Commissioner Ricardo Lara (D), who four years ago became the first LGBTQ person elected to a statewide office in the Golden State.

"It feels pretty wonderful," Fimbres told the Bay Area Reporter about making it onto the ballot on her third attempt. "I remember when I was running as a write-in candidate, a guy from the San Diego Union Tribune said I couldn't be a serious candidate if I wasn't on the ballot."

Nonetheless, Fimbres still faces serious challenges in surviving the June primary, where only the top two vote-getters regardless of party will advance to the November election. She lacks name recognition and is not supported by the statewide Green Party, which as part of a left-leaning unity slate has endorsed Peace and Freedom Party member Nathalie Hrizi, who also lives in San Francisco and has run a number of times before for insurance commissioner.

Lara, despite his controversies related to initially taking campaign contributions from people with ties to the insurance industry, has the endorsement of the statewide Democratic Party and groups like Equality California, the statewide LGBTQ advocacy organization. But he is facing an intraparty challenge from North Bay Assemblyman Marc Levine (D-Greenbrae), which Fimbres sees as potentially benefiting her candidacy.

"I think my chances are very good because the Democrats are going to split the vote," said Fimbres, who so far has put together a six-person campaign team to help her run this year.

She has also secured endorsements from local Green Party chapters in Sacramento and Los Angeles counties, as well as from Veterans for the Green Party and the National Black Caucus Green Party of the United States. Fimbres, a Black Navy veteran, has pledged to use the bully pulpit that would come from being insurance commissioner to push for universal health care in the state.

"I would work with everybody to provide single-payer health care," said Fimbres, currently between nursing jobs and focusing full-time on her campaign.

Having been the first out trans person appointed to a city panel, when she served on the Veterans Affairs Commission under the Board of Supervisors and former Mayors Willie Brown Jr., Newsom, and the late Ed Lee, Fimbres told the B.A.R. she knows "how to quote-unquote commission" and is qualified to serve in the statewide position.

"It is not my first time at the rodeo," said Fimbres, who last year withdrew from being considered for a seat on San Francisco's police commission.

Bi candidate ends San Jose council bid
San Jose planning commissioner Justin Lardinois, a bisexual city native, has ended his bid for a council seat. He had been the first person to declare their candidacy for the San Jose City Council's District 1 seat that includes the famed Winchester Mystery House, as the B.A.R. noted last April.

But in a March 12 email to supporters, Lardinois announced he was dropping out of the race. He cited personal reasons for leading to his decision.

"While I'm proud of the campaign I ran, it became increasingly clear to me that personal circumstances unrelated to the campaign necessitated my exit from the race," wrote Lardinois, whose term on the planning oversight body expires June 30.

It has been 16 years since the LGBTQ community in San Jose has had out representation on the city's governing body. Ken Yeager, the first and only out council person, was elected in 2000 and departed in 2006 when he became the first, and so far only, gay member of the Santa Clara County Board of Supervisors.

Looking to end the drought in out representation on the City Council is gay Democratic Party leader Omar Torres. An elected member of the board of the San Jose Evergreen Community College District, Torres is seeking the District 3 council seat that covers downtown San Jose.

He will be taking part in a candidate forum from 6 to 7:30 p.m. April 14 that is being co-hosted by the Billy DeFrank LGBTQ+ Community Center. If no candidate secures a 50% plus one vote in the June 7 primary then the top two vote-getters will compete for the seat in the November general election. 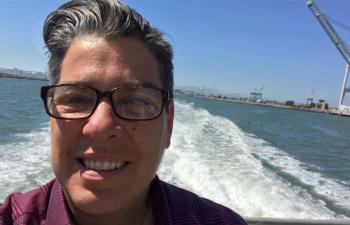 EQCA endorses Kaplan for Alameda supervisor
Oakland At-Large City Councilmember Rebecca Kaplan, a lesbian and the body's lone out member, won the endorsement of EQCA for her bid to become the first LGBTQ person on the Alameda County Board of Supervisors. She is seeking the District 3 seat that includes the cities of Alameda, San Leandro, a portion of Oakland, and the unincorporated communities of San Lorenzo, Hayward Acres, and a portion of Ashland.

Former supervisor Wilma Chan was killed by a motorist while walking her dog in Alameda last November. Her former aide, Dave Brown, was appointed by the board to serve out the remaining 14 months of Chan's term through January. He had ruled out seeking to be elected to the seat.

Those who did file for the race include former Alameda city councilmember Lena Tam, former San Leandro city councilmember Surlene Grant, and former Oakland school board member David Kakishiba. Among the field of candidates, Kaplan is seen as the frontrunner and could possibly win the seat outright on the June ballot if she secures more than 50% of the vote.

"I am so thankful and honored to be endorsed by Equality California, which has been advancing vital issues for decades, and is the nation's largest LGBT+ civil rights organization," stated Kaplan. "I would be proud to serve all of our communities as County Supervisor, and to help ensure a stronger and healthier future."

EQCA also announced March 17 endorsements of two gay supervisor candidates in the Bay Area region: San Francisco Supervisor Rafael Mandelman, who hopes to be reelected in November to his District 8 seat, and Watsonville City Councilmember Jimmy Dutra, who is once again seeking the District 4 seat on the Santa Cruz County Board of Supervisors.

"These candidates understand the power of LGBTQ+ and pro-equality voters, and we have a historic opportunity this year to achieve proportionate representation and increase pro-equality support," stated EQCA Executive Director Tony Hoang. "We are confident they will be an important voice in our work to achieve full, lived equality for all."