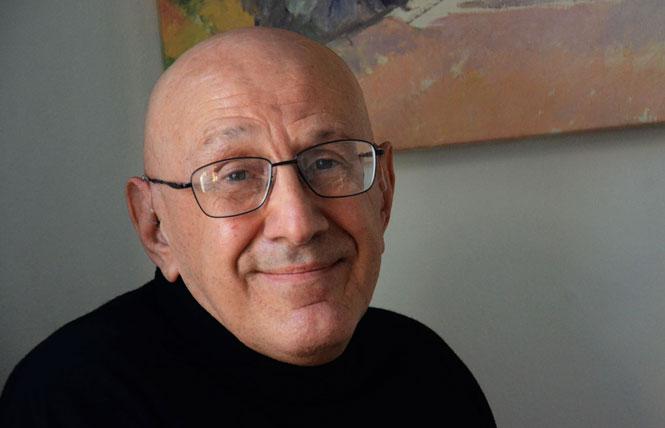 Michael Misenti filed a grievance after feeling stigmatized in a support group but has decided not to pursue it. Photo: Rick Gerharter

Following weeks of back-and-forth discussions between a gay San Francisco man and the organizers of a support group for people living with HIV over the age of 50, he has decided against rejoining the group after being subjected to what he said were humiliating and shaming comments from other group members, as well as a facilitator.

Michael Misenti, 67, signed up to participate in a support group sponsored by Zuckerberg San Francisco General Hospital's Ward 86, the hospital's HIV care and research center, in 2021. The group is a part of Ward 86's This text will be the linkGolden Compass Program>, which was designed specifically for people living with HIV over the age of 50. The support group is described on a web page for Golden Compass as "[a] monthly support group [providing] an opportunity to come together, share experiences, and relieve loneliness."

Misenti, already enrolled in the Ward 86 program, was encouraged to join the affiliated support group.

"Well, they wanted me to join," said Misenti in a phone interview with the Bay Area Reporter. "I was approached by the social worker at Ward 86 because I was in the age group. They're supposed to help you with a lot of different issues with HIV, particularly aging."

At the time, it seemed like a great idea. Misenti has been living with HIV since the 1990s and needed a social outlet.

"I try to find things to get out and be with people," he said. "It's harder to do with COVID." Participation in the group also provided a small incentive, a $10 Safeway gift card, which made the option even more attractive.

Misenti joined the Golden Compass group in June or July of 2021, he said. Typically, there were six or seven members, usually men. A couple of women were also involved but only occasionally. Misenti enjoyed the group for the first four months or so. Communication with fellow members was comfortable, and he enjoyed the company. That changed around the beginning of December.

Like many support groups, members come and go. And two new members joined, a gay married couple. For Misenti, things began to go downhill from there.

The new members, said Misenti, were "loud" and "judgmental," and began "to dominate the group," often, seemingly, with the support of the two facilitators.

One facilitator "also let these two participants ramble on about the subjects that had nothing to do with the current topic," Misenti wrote in an email to the B.A.R. "He repeatedly showed favoritism to [the] two very conservative participants who often made judgmental statements."

The breaking point for Misenti came when he mentioned to the group that he may have been potentially exposed to syphilis. The couple, he said, made it very clear how they felt about that.

One half of the couple "said that all people with HIV taking meds shouldn't have unsafe sex. I disagreed," said Misenti. "When I tried to speak, [the facilitator] allowed these participants to interrupt me and tell me that I deserved to get syphilis after having unsafe sex. This facilitator clearly was uncomfortable when I talked about possibly contracting syphilis. Later, after I complained to [prior facilitator] Helen Lin about him, the facilitator wouldn't speak to me nor allow me a chance to talk. It's very stressful to have a passive aggressive facilitator." (The B.A.R. is not naming the other facilitator because they have not responded to a request for comment. Misenti shared Lin's email response with the paper.)

Grievance filed
Misenti filed a grievance with the HIV Consumer Advocacy Project, a division of the AIDS Legal Referral Panel. On February 28, HCAP staff attorney Stephen Spano sent an email to UCSF patient relations requesting a meeting with himself, Misenti, and a patient relations representative in a position of authority. Misenti provided the B.A.R. with a copy of the email but later said that he will not participate in any mediation.

Spano's email stated that Misenti felt "shamed and stigmatized" by the comments made in the support group and that he was not provided "adequate space to share his feelings" about the statements allegedly made by the gay couple.

As it happened, Misenti said he turned out negative for syphilis, and — for that matter — he was also undetectable for HIV thanks to his medications. In the past, in another support group in which he was involved back in the 1990s, he said, people felt free to talk about health concerns surrounding their sexuality.

"People had no problem with these subjects," Misenti said. "And neither did the facilitators, who were all volunteers."

While others in the group disagreed with the statements of the couple, he said, few were willing to say much more in order to avoid conflict.

Misenti said he attempted to speak with Lin about the matter but "[a]fter I complained, Helen Lin's response was that people in the group can say what they want and they weren't going to deal with this issue because it was too upsetting for group participants."

If there were any attempts on the part of the group's facilitators to talk with the gay couple, it wasn't done during group sessions, Misenti said.

In an email to Misenti, which he provided to the B.A.R., Lin wrote, "As the prior facilitator of this group, I want to offer you some feedback since you offered me some feedback in your last email. It is important in a group dynamic to be both open to receive feedback and to give feedback. My preference is that you have the courage and patience to talk things over with ... the group facilitator, in person in a one-on-one session or by telephone so you both have the opportunity to review your expectations and hurt feelings.

"This suggestion is not meant to accuse you in any way, but suggest that meeting in person to discuss grievances is in my professional opinion the most effective way to preserve the integrity of the group agenda while prioritizing your needs," Lin wrote. "Conflict and difference of opinion is a way that groups grow together, but in this group, conflict cannot be worked through in the manner you wish for without inflicting undue stress on other members not involved."

Spano, the HCAP attorney, declined to comment about Misenti's specific case, but described his work in general.

"In short, the HIV Consumer Advocacy Project seeks to resolve disputes between consumers of HIV-related services and the service providers who are funded through Ryan White Care Act dollars and DPH HIV Health Services contracts," Spano wrote in an email to the B.A.R. "I do this using the least adversarial methods of dispute resolution available knowing that my clients are often very much reliant on receiving these services even where there is conflict."

The B.A.R. requested an interview with both Lin and the other facilitator through the hospital's media office but only received the following statement from Dr. Monica Gandhi, medical director of the HIV clinic at SF General: "Golden Compass provides extra services for those over 50 years old with HIV, offering bone health support, a cardiology clinic, exercise classes, and support groups. We always try to provide a supportive environment in our clinical programs."

Neither Lin nor the other facilitator responded to direct requests by the B.A.R. for interviews.

Misenti left the Golden Compass group at the end of January, and has since joined a different support group at Most Holy Redeemer Catholic Church in the Castro, which he had attended more than 20 years ago. Although he had originally planned to settle the issue through mediation, he has since changed his mind.

"Stephen [Spano] told me that I would not be allowed to return to the group unless I met with Helen Lin and [the other facilitator]," Misenti wrote in an email to the B.A.R. "They also stipulated that I should attend a mediation with the two group members that I had the conflict with. Meanwhile these two people are still in the group. So I guess they are saying that I did do something wrong. But they won't tell me what. The only thing I can think of is that I complained about the issue. I asked Stephen to elaborate. But he wouldn't."

"I have been back and forth about going back to this group," said Misenti of Golden Compass. "I could use the weekly [incentive] $10 Safeway gift card. But while I was in this group, not one person supported me, so I decided I'm not returning."

Update: Since the publication of this story, Misenti has reached out to the B.A.R. with an update. On March 23, the same day as the original story was published, Misenti, along with AIDS Consumer Advocacy Project attorney Stephen Spano, met with Dr. Monica Gandhi, medical director of the HIV unit at Zuckerberg San Francisco General Hospital, and John Szumowski, a doctor at Ward 86 and an assistant professor at UCSF, to discuss the events he had complained about. Gandhi asked him to forgive her "and I did," Misenti said. He was also informed that the facilitator with whom he had taken issue would attend facilitator training.

Misenti said he will continue participating in the support group at Most Holy Redeemer Catholic Church, however, and has no immediate plans to return to the Golden Compass support group.


Updated, 3/25/22: This article has been updated with the result of a meeting Mr. Misenti attended on March 23, the day the original article was published.