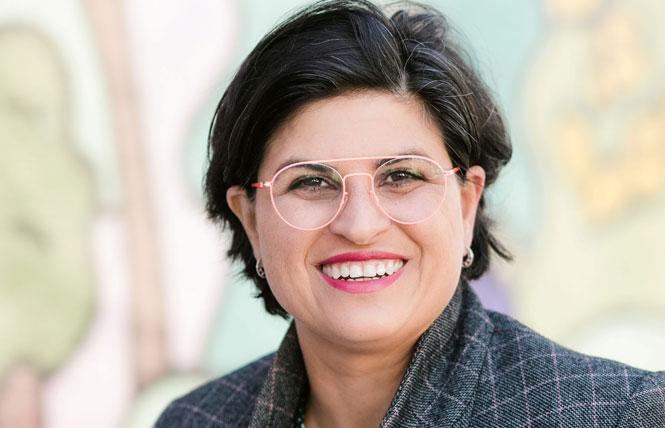 The San Francisco Arts Commission has welcomed a lesbian Iranian woman to the panel after Mayor London Breed swore her in earlier this month.

Mahsa Hakimi, who also identifies as queer, is an attorney who founded Hakimi Law in 2003 in San Francisco. She specializes in intellectual property issues and protecting the creative talent and business interests of artists and entrepreneurs, a news release from the mayor's office stated. She also served as the senior in-house counsel for the Amidi Group of companies, in charge of all legal aspects of business, corporate, employment, and general operation of entities.

From 2002-2013 Hakimi was an adjunct professor at Golden Gate University School of Law. She is currently on the advisory board of the UCSF Alliance Health Project, stated the release.

Breed swore in Hakimi March 7 during a small ceremony in the International Room at City Hall, the release stated.

Hakimi was mentored by Brooke Oliver, a lesbian and attorney who formerly served as counsel to San Francisco Pride and has represented groups like Dykes on Bikes. According to the release, Oliver taught Hakimi how to practice law through a social justice lens, specifically in terms of protecting artists, the release stated.

Hakimi served as interim co-chair of the Castro LGBTQ Cultural District. During the Black Lives Matter protests in 2020, she used her influence with the district to further a mural project in the LGBTQ neighborhood expressly addressing calls to diversify its narratives. Part of that was a mural by Haitian American artist Serge Gay Jr. that now graces the side of the Moby Dick bar at 4049 18th Street. Entitled "Gear Up," the work represents "the entire community," not just Harvey Milk or the rainbow flag, Hakimi noted in her personal background statement. Gay, who is a gay man, was also commissioned to complete a mural, entitled "Never Alone," on the building at 401 Duboce Avenue that houses Maitri Compassionate Care, as the Bay Area Reporter previously reported.

Hakimi lives with her partner, Ghazal Karimpour, who is also Iranian. The release stated that the couple met during a meet up where Iranians from the LGBTQ community could connect, which Hakimi spearheaded. For most of her 20s and what she describes as her "coming out experience," Hakimi stated that her "safe place was the Castro," according to the release.

SF LGBT center seeks muralists
Sticking to its plan after controversy erupted in 2021 over the fnnch honey bear murals to feature a new mural on the exterior of the Victorian part of the building every year, the San Francisco LGBT Community Center has put out a call for muralists for 2022.

In an email announcement the center stated that submissions are open to professional mural artists living and producing art in the Bay Area. "LGBTQ+ muralists, BIPOC muralists, trans, nonbinary, and women muralists are encouraged to apply," the email stated.

Artists are invited to submit an application that includes their resume and portfolio. From there, selected finalists will be invited to submit a mural concept proposal that is conceptually, aesthetically, and technically compelling, and reflects the center's values and mission, according to the email. Concept proposals should be focused on inclusivity and represent the local LGBTQ+ community. An honorarium will be provided, the announcement stated.

For any questions, contact Rosemary Gardner, director of community programs, at rosemaryg@sfcenter.org or (415) 865-5619.

Trans visibility events
March 31 is designated as Transgender Day of Visibility and several local organizations are planning events around that time.

The Oakland LGBTQ Community Center will hold a trans visibility event Friday, March 25, from 4 to 9 p.m. at the center's new Town Youth Club (TYC) space in the Oakstop building located at 1740 Telegraph (across from the Fox Theater.)

This event will honor transgender people who are surviving, thriving, succeeding, and maintaining visibility in the community, according to a Facebook post. It is sponsored by the center's trans support group, Hey Queenz; Cal-Pep, the California Prostitutes Education Project; and APEB, formerly AIDS Project of the East Bay.

For more information and to RSVP, email Kayla@oaklandlgbtqcenter.org or call (510) 882-2286 and ask to speak with Kayla.

The San Mateo County Pride Center and the Redwood City Public Library will hold "Trans 101 — Beyond Trans Visibility: From Ally to Advocate" Wednesday, March 30, from 6 to 7:30 p.m. The virtual event is free and open to all. Register in advance here.

On March 31, the Pride center will hold an online discussion specifically for trans and gender diverse communities about available resources. Information will be provided on housing, health care, employment, and more. The event is from 6 to 8 p.m. Participants need to pre-register and can do so here.

The Pride center is a program of Star Vista.

In the South Bay, the Billy DeFrank LGBTQ Community Center will hold an online day of visibility program Wednesday, March 30, from 7 to 9 p.m. The event is free. People can also watch the show at the center, 938 The Alameda, in San Jose. For more information, click here.

On Sunday, April 3, from 6 to 7:30 p.m., Parivar, a queer trans South Asian organization, will hold an in-person visibility event at the Sewa Center, 691 South Milpitas Boulevard in Milpitas. For more information, click here.

Belrich and Via's group recently published two reports on the issue, as the B.A.R. previously reported. One report looked at the ecosystem that enables conversion therapy misinformation to spread online, while the other looked at conversion therapy proponents who are key players in the campaigns.