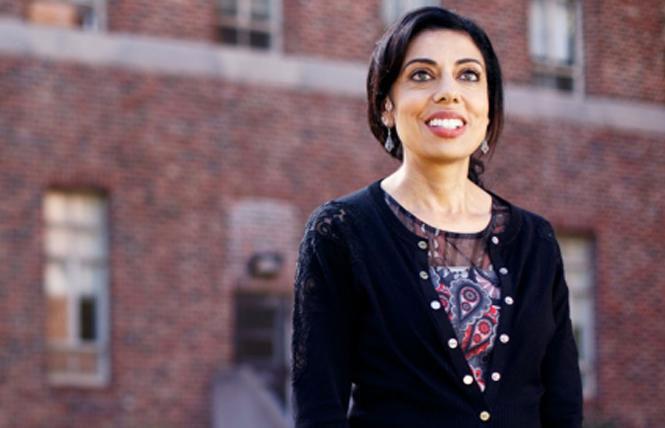 Dr. Monica Gandhi will be among several speakers at an HIV rally Monday. Photo: Courtesy UCSF

Concerned that San Francisco's historic focus on HIV/AIDS services and care have been diminished, several advocacy groups are planning a rally and die-in at City Hall on Monday, March 21.

Organizers are calling on San Francisco's leaders "to 'take back' HIV as a major priority in our city," according to a news release quoting Dr. Monica Gandhi, the medical director of Ward 86, the HIV clinic at Zuckerberg San Francisco General Hospital. Gandhi is a featured speaker at the event, scheduled for 11 a.m. outside City Hall at 1 Dr. Carlton B. Goodlett Place.

Calling it "a lack of attention" to HIV on the city's part, organizer Paul Aguilar, a gay man and chair of the Harvey Milk LGBTQ Democratic Club's HIV Caucus, said, "The lack of interest is 40 years of complacency." Forty years later, he added, there is neither a vaccine nor a cure.

Last year marked the 40th anniversary of the first reported cases by the federal Centers for Disease Control and Prevention of what would come to be known as AIDS.

Statistics from 2020's HIV Epidemiology Annual Report, issued last year by the San Francisco Department of Public Health, show some alarming numbers concerning HIV, particularly in regard to the impact of COVID on HIV care in the city.

Compared with 2019 — before COVID — screening for HIV fell by 44% from March 2020 to March 2021. Viral suppression fell from 75% of people living with HIV to 70%; for the city's homeless, those figures are even more dramatic with viral suppression rates falling to just 20% from 39%.

The COVID pandemic produced some statistical curiosities, too. In 2020, overall HIV infections rates fell in San Francisco by 22%, far surpassing the previous years' average decline of 16% but that simply may be a result of fewer people being tested due to the lockdown, health officials noted at the time.

Gay District 8 Supervisor Rafael Mandelman, the lone LGBTQ member on the Board of Supervisors, said he's supportive of the rally.

"It is clear that San Francisco's excellent COVID-19 response came at the expense of other public health priorities," he wrote in an email, "including sexual health and HIV prevention and treatment. As we learn to live with COVID-19, it is both timely and appropriate for the HIV advocacy community to call on city leaders to refocus on getting to zero.

"[T]his is a concerning trend that must be reversed if we are going to achieve our goal of zero HIV infections, deaths, and stigma by 2025," Mandelman added.

For Aguilar, the travails facing San Franciscans living with HIV are numerous and the diversion of resources to COVID have only made them worse, including long-term HIV survivors' access to affordable housing, harm reduction, mental health, social housing, and economic assistance.

"Death is slowed down," he said, but other factors related to AIDS are still taking down the community.

The rally and die-in will include several notable speakers, including Harry Breaux, founding member of the San Francisco Principles; and Vince Crisostomo, director of aging services with the San Francisco AIDS Foundation.