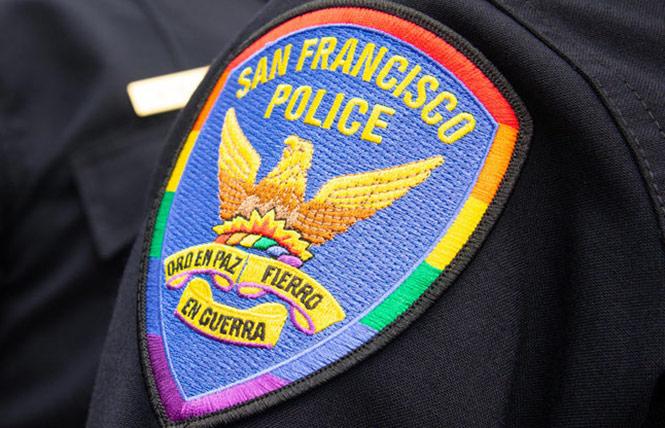 It was four years ago that the San Francisco Police Commission unanimously passed a policy mandating that police respect a person's pronoun choices. It's a policy that seems to be working well but, even in the best of circumstances, mistakes happen.

Last week, during an alleged abduction case involving a young transwoman near San Francisco's Fisherman's Wharf on March 7, San Francisco Police Department Special Victims Unit put out a news release offering details about the woman's disappearance. In a move that prompted immediate criticism, the release deadnamed the victim, as well as placed her name in quotation marks. Deadnaming is the act of referring to a trans or nonbinary person by the name they used prior to transitioning.

"Unfortunately, our use of quotation marks around the individual's lived name was widely perceived by the community as delegitimizing and hurtful," wrote Matt Dorsey, the gay civilian director of communications for SFPD, in an email to the Bay Area Reporter, sent out in recognition of the error.

The use of quotation marks, he added, was meant to convey the SFPD's use of a spelling found in the case's incident report, a spelling that was different from others seen in some of the social media posts by her friends publicizing the incident.

Police and the woman's friends confirmed March 10 that the woman was found safe in Berkeley.

"In hindsight, however, greater thought should have been given to how these quotation marks might be perceived," Dorsey stated. "As head of the Media Relations Unit, I accept full responsibility for that oversight, which won't happen again."

The SFPD's policy concerning name usage was enacted in October 2018. Titled "Interacting with Transgender, Gender-Variant, and Nonbinary Individuals," Department General Order 5.22 goes into detail not only about names and forms of address but also guides police on investigative stops ("Members shall not ask questions about intimate details of a person's anatomy to determine an individual's gender without legitimate and articulable reasons."); detention, arrest, and searches ("If a member of the TGN individual's preferred gender is not available, the search can be conducted by the officer on scene. Good judgment should be exercised in searching sensitive areas of the subject [breasts, groin and buttocks]); and holding cells and booking areas ("TGN individuals shall not be detained in a holding cell or in the booking area at any district station. Members shall arrange transportation of such arrestees to the appropriate detention facility as soon as practicable...)."

Whether or not a person's deadname should ever be used is also addressed.

"There are important and legitimate reasons that a transgender person's legal name ... should be used in a missing person's case," Dorsey's email continued, "noting that there are many factors to consider when there is a 'legitimate need to find a missing person, utilizing all available information in a lifesaving effort.'"

The policy was devised with the help of Officer Brody Elton, a transgender cop who joined the SFPD in 2007. Elton "was instrumental" in writing DGO 5.22, stated Dorsey, and the policy itself "was instrumental in making the San Francisco Police Department the national leader among the top 25 U.S. law enforcement agencies in working with [TGN] individuals" according to a report issued in 2019 by the National Center for Transgender Equality, he added.

In an email to the B.A.R., Elton recounted how he, and several representatives from the SFPD as well as the city's Human Rights Commission and the Office of Transgender Initiatives, came together to write the order.

"I have been a member of the San Francisco Police Department for 15 years," Elton stated. "About four years into this profession, I was asked by the soon to retire Lieutenant Stephan Thorne, to replace him as a transgender liaison."

Thorne was the first SFPD first officer to come out as trans, in 1998, and would eventually help Elton during his own transition in the department, Elton said.

Elton's work in the field, particularly in the Hate Crimes Unit, offered him a chance to "conduct outreach and listen to concerns of various individuals in the transgender community and stake holders. It became apparent that a substantial shift had occurred in relation to policing," he wrote.

With input and research from numerous "local trans and nonbinary members and from their community groups" as well national organizations and agencies, including the United States Department of Justice, the order was released in 2018.

"In the last eight years and especially the last four years have seen an explosion in trans related anti-discrimination protections ... along with backlash of proposed bills, laws, and regulations," Elton stated. "DGO 5.22 reflected the legal movement balanced with real world safety implications for law enforcement circumstances."

Black transwoman reported missing in SF is found in Berkeley
Sign up!