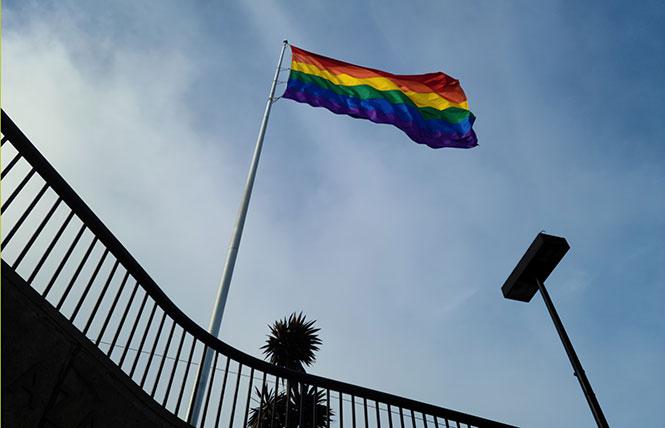 The rainbow flag flies in the Castro. Photo: Cynthia Laird

On March 17, 2020, the Bay Area shut down as the coronavirus unleashed its force. San Francisco was a virtual ghost town, as was every other city in the region. Essential workers boarded empty BART trains or were able to drive at the speed limit across the normally congested bridges. People were scared and stayed inside their homes. Or they were sick in hospitals. Doctors didn't know much about COVID-19 and early recommendations from federal health officials that there was no need to wear masks proved very wrong. On the streets, life became even harder for those who were unhoused. It seemed like something out of a movie. Except it wasn't, and just two years later we are still adjusting to the changes and effects of the virus.

At the time, public health officials and political leaders instituted the shelter-in-place order to help "flatten the curve" to prevent hospitals from being overwhelmed. It took a long time to bend that curve. As the virus raged on, doctors and medical researchers learned more. It was spread through the air, after all, so masks were strongly recommended, and then mandated beginning that April. The deaths kept mounting. The race was on for a vaccine. The economy went into a nosedive, as scores of businesses remained shuttered. As we all know, after the initial COVID outbreak, the virus mutated into the contagious Delta and Omicron variants last year. Just when we were on the cusp of returning to some semblance of normalcy, a variant emerged. There are still variants popping up, the latest is Deltacron. Little is presently known about it, but science has shown that the vaccines that became available last year work at preventing serious illness in most cases. The booster shots offer additional protection.

The LGBTQ community, relying on its experience with the HIV/AIDS epidemic, really stepped up during COVID. People organized online fundraisers to help restaurant and nightlife workers, many of whom saw their jobs suddenly end or drastically reduced. Others got creative, moving events online to foster a sense of connection. Many nonprofit agencies pivoted to helping clients over the phone or Zoom. Organizations that provided food were able to keep delivering meals. The state and local governments instituted eviction moratoriums so that people wouldn't be kicked out of their homes because they couldn't pay rent.

Depressingly, one thing that hasn't changed as COVID enters its third year is accurate data on how the virus impacts the LGBTQ community, many of whom have risk factors that make them more susceptible to the virus than the general population. As we report in detail this week, even in California, where Governor Gavin Newsom signed a law to track the effects of COVID on the community, progress is frustratingly slow. There are several reasons for this. For one thing, health record systems in the state have not been updated to ask sexual orientation and gender identity questions. In other cases, SOGI data is not able to be shared because of problems with what are known as the Health Level Seven International (HL7) standards. As we report, "The HL7 standards omitted sexual orientation data and used outdated terms for gender identity. Last January, after being pressed by California lawmakers and health officials, Health Level Seven International CEO Dr. Charles Jaffe pledged to address the SOGI data concerns." Last year, Public Health Work Group that oversees the HL7 standards had met and spoken with staff from the state's Division of Communicable Disease Control to address the standards needed for laboratories to exchange their SOGI data. In a bit of good news, HL7 has now issued guidance for how labs can transmit SOGI data, according to the state Department of Public Health, such as instructions for how the labs should format their reports to include SOGI data when such patient-level data is given to the lab. But it is still not known when the state will have SOGI reports or COVID data that can be shared with the public and researchers.

As we continue living in a world with COVID, it's likely some things won't change. Some people will keep wearing face coverings and avoid crowded indoor spaces, where health officials say the virus is most contagious. Students will continue to struggle as in-person learning resumes. Small businesses will continue to struggle. Tourism, a mainstay in San Francisco, will take time to rebound. We're not out of the woods by any stretch. Local governments must continue to help those impacted by COVID, whether it be access to health care, housing, and economic incentives for small businesses. But as we enter this third year, we know a lot more now than that March day two years ago. And we're still all in this together. It's a new normal for now.